January 7, 2021
In Victoria Thompson's new Counterfeit Lady novel, City of Schemes, Elizabeth Miles is preparing for her wedding to Gideon Bates, when a menacing shadow from her past threatens to destroy the life she has built for herself. 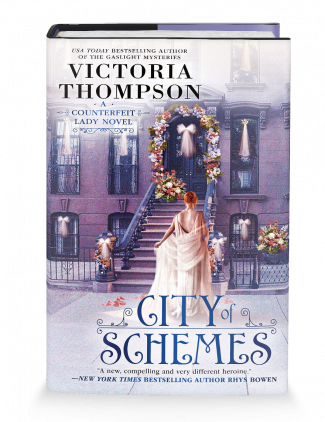 The fourth book in Victoria Thompson’s excellent Counterfeit Lady series is an utter page-turner! There isn’t a single wasted moment in this terrific, twisting tale as our intrepid heroine Elizabeth Miles seeks to not only preserve herself and her fiance Gideon Bates from a threat from their past, but also to prevent a con from being run on one of Gideon’s best friends.

The Great War is over and Captain Logan Carstens has recently returned from France, still harboring feelings for Noelle, the schoolteacher in whose parents’ house he was billeted. Unfortunately, he became engaged to childhood friend Rosemary Westerly before being shipped out, though honestly doesn’t remember exactly how that happened. Still, as a man of honor and a member of New York City’s Four Hundred, the most elite members of society, he can hardly humiliate fellow socialite Rosemary by throwing her over. So he’s fully prepared to suffer in silence till he receives a letter from Noelle begging for a large sum of money to help her flee France for America.

As Gideon is both his friend and lawyer, Logan goes to him to ask for help withdrawing the amount from his trust fund. Gideon doesn’t need to be engaged to a con artist to know that something doesn’t seem right with Noelle’s request. He asks Logan whether they can bring Elizabeth in for a consultation which, of course, thrills Elizabeth no end. She confirms Gideon’s suspicions but, upon seeing how adamant Logan is in not wanting to refuse the woman he loves just in case there’s the tiniest chance she really is the letter writer, thinks up a plan to figure out what’s really going on with Noelle and who the letter writer might actually be. A small part of her is spurred on by the fact that she’s recently met Rosemary, who is exactly as awful as her best friend, socialite and scholar Anna Vanderslice, had warned her. Worse, Rosemary’s interfering ways have likely brought Elizabeth and Gideon back to the attention of Oscar Thornton, the vicious thug whose thirst for revenge was only extinguished when he thought Elizabeth dead. Now Oscar is in New York City once more, looking for the money Elizabeth conned him out of and threatening to expose her if she doesn’t find a way to pay him off.

Elizabeth is far more alarmed at this prospect than Gideon is. While they and their close circle of family and friends know that Elizabeth’s grifting was almost always done at the expense of rich evildoers and in pursuit of the justice so little afforded to women of the era, being publicly known as a former con artist is hardly respectable, and especially not for a lady about to enter high society by virtue of marriage. Gideon tries to reassure her:

“Whose opinion could possibly matter more than mine?” he challenged, feeling very virtuous.

“Mr. Devoss would regret it very much, but he would have no choice but to let you go. You know it’s true. And your poor mother wouldn’t be able to go anywhere without being laughed at and—”

“Elizabeth, stop. Not all my friends would snub me, and I’d simply find other clients and—”

“Would you? Are you sure? New York is a big city, but New York society is a small town where everyone knows everyone else. How could some of your friends support you without being snubbed themselves?”

If Elizabeth is going to face social disaster, then she’s definitely not going to do it at the hands of a war privateer and murderer, now turned blackmailer. But she also has no intention of paying Oscar the quarter of a million dollars he’s demanding, even if she had that kind of money to begin with. The odd case of Noelle’s letter gives her an idea for hopefully getting Oscar out of their hair for good. No, not by killing him off: as Elizabeth’s father and mentor would say, murder is far too messy. But there are other, if more complicated, ways to discredit a blackmailer, and Elizabeth is definitely up for the challenge.

I always appreciate a good heist novel, as Elizabeth here both foils and assists in running separate variations on a classic con. The plotting is whip-smart, and the characterizations and settings written with great attention to both heart and detail. Ms. Thompson writes vividly and with a wry humor of how things were both different and very much the same only a hundred years ago in New York City, as in this scene where Rosemary joins Elizabeth and Anna for lunch:

“I feel so strange coming into a restaurant unescorted,” Rosemary marveled when she had made her way over. Until the war, few respectable eateries would seat women who did not have a male escort, and the few who did restricted them to ladies-only dining areas.

“But isn’t it nice to be able to dine out with a friend without dragging along a man who doesn’t want to be there?” Anna said.

“I suppose.” Rosemary didn’t look convinced. Perhaps she thought a male escort was an essential accessory, like a hat and gloves.

I devoured this book in a single day, completely losing myself in the adventures of Elizabeth and her friends and frenemies in early 20th century America. I really need to start reading Ms. Thompson’s other mystery novels to fill the Counterfeit-Lady-shaped hole in my heart while waiting between books. This is by far one of the best historical mystery series I’ve ever had the pleasure of enjoying, and I’m always impatient to read more!