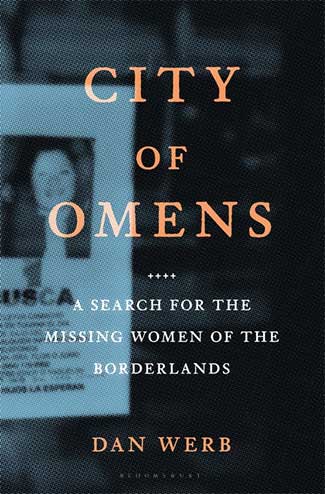 City of Omens, Dan Werb’s investigation of the root causes of the high rate of death among the women of Tijuana, opens with a breakneck trip across the city’s highways and into a camp hidden away in the Tijuana River Canal. There, Werb and his associates—part of a team studying the spread of HIV in the city—meet a camp of some 40 people. They’re drug users, and the camp is one of the city’s countless hidden refuges, places where people can use drugs in peace, away from the police and other predators. It’s a liminal place in a city full of liminal places and people in liminal states—neither one thing nor another, neither here nor there.

What haunts Werb the most about the camp, though, is the absence of women. Of the some three dozen people, there is only one woman. It’s a signal to Werb, an epidemiologist, that something is deeply wrong—in a city where risky behavior is a way of life for so many, why are women so disproportionately affected?

As Werb discovers, it’s a question with seemingly endless answers. Like the city and people it profiles, City of Omens is a liminal book, occupying a territory on the edges of investigative journalism, true crime, academic research, social sciences, history, and medicine. It is ambitious in every sense, from the scope of Werb’s research to the quality of the writing. It’s a book that requires patience and attention—the sort of qualities that are absent from popular consideration of the U.S.-Mexico border—and Werb rewards readers with a comprehensive, ultimately disturbing, study.

Werb’s central conceit, that the rate of deaths of women in Tijuana’s red-light district, the Zona Norte, has become so high that it’s comparable to an epidemic, allows him to examine the city and its people in epidemiological terms. As Werb describes it, any epidemiological phenomena can be described in terms of a host, an environment, and a pathogen. Such is the case in Tijuana, where the city’s women risk a variety of deaths simply by going about their daily lives.

All women, all Tijuanenses, denizens of the Zona Norte, working the red-light district. They were fixtures there until they died, a group of friends walking a daily line between sex, drugs, money, and death, until the moment when they were killed. What surprised me, though, was that their deaths appeared to have come via competing risks before AIDS could take them. Susi’s situation—her entire group of friends, all women, wiped out—was as improbable as it was horrific, but its very improbability put it squarely in the realm of epidemiology.

Werb interviews drug users and sex workers and spends time with the police officers who patrol the Zona Norte. This on-the-ground reporting is one of the strongest elements of City of Omens. Werb spends time in the “shooting galleries,” enclaves where users can get a fix in peace, and in the factories that ring the city and offer an illusion of escape. The details are vivid and the people memorable and complex. Though a scientist at heart, Werb lets his compassion guide his research and writing, and we’re able to see the epidemic’s human toll.

This is a difficult balance, and a lesser author or investigator couldn’t pull it off. Human stories—such as the ongoing anecdotes from Susi, one of Werb’s sources, about the crew of women she ran with during her years in the Zona Norte—form the book’s core, but Werb isn’t afraid to dive into the city’s history, it’s culture, it’s fraught relationship with America and the U.S. military, and the complex, destructive relationship between the drug cartels and Mexico’s government. The narrative soars high and then dives back down for a street-level view, and despite some occasional hiccups (such as Werb’s leaden descriptions of digging through data and puzzling out statistical models), it works.

Readers of narco noir who come to the book looking for salacious cartel stories will instead walk away with a fairly comprehensive view of Tijuana and its troubles. Werb, among his other skills, is also an excellent stylist, and there are some great passages like this throughout the book:

I crouched in my quiet place below the plaza, breathing in the stillness, interrupted every so often by a sharp noise above, only to glimpse the edge of a boy twisting at the corner of the field to keep a ball in play, a silhouette momentarily softening the sun’s light as it kicked up dust into the sky. And then, as I sat there, the sudden smell of toxic runoff burned my nose: a miasmic cloud was passing over from somewhere up above, off-gassing from the maquiladora. It smelled to me like slow death, the stench of burning plastic and concentrated cleaning agents.

Werb finds that the epidemic that’s claiming Tijuana’s women has no single cause. Take away the drugs, for example, and the pollution from surrounding factories, the sex trade, the paranoia and fear surrounding the U.S.-Mexico border, greed, and the misogyny that rests at the core of, well, everything, would still kill women at a disproportionate rate. He does find, though, that the U.S. is so often the impetus for so much that’s gone wrong in the city, from the American-funded drug war that sparked renewed violence between the cartels and the Mexican government to the Navy’s decision to pull its sailors out of the city and, as a result, destabilize the quasi-legal vice economy that keeps Tijuana alive. As City of Omens concludes, Tijuana is less of a liminal space and more of a mirror, reflecting back the worst of America’s impulses, fears, and desires.