February 28, 2020
City of Margins is the latest from acclaimed neo-noir author William Boyle, featuring a vivid new cast of characters who collide in gritty 1990s Brooklyn. 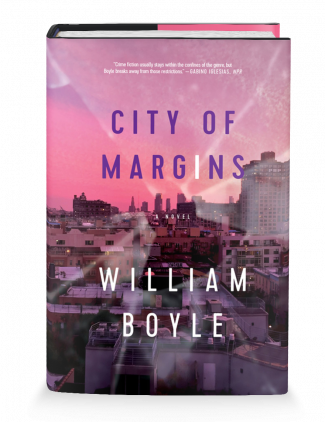 In a post-Sopranos world, Italian-American stories have dried up like a Cucuzza left on the vine. An agent even told me she was sick of Italian mobster stories, and I agreed with her because in the hands of medium talents they descend into caricature; dumb, inarticulate brutes who our hero private eye—despite that he’s a scrawny alcoholic—can easily disarm and give a stern talking to, not that such mooks will learn their lesson. Seeing this in a book that came out last year to great fanfare was disheartening because if anything, I thought The Sopranos would have taught writers they had to up their game if they were going to bring out the tired stereotype. There are plenty of Italian-American mobsters, but they aren’t all colorful goons out of a Dick Tracy comic.

So when I read Gravesend by William Boyle, I was pleasantly surprised. A Brooklyn native and a paisan, Boyle knows his characters through and through, and inhabits them naturally, whether they are a washed-up cop turned mob enforcer like Donnie Parascandolo, a tired and unfulfilled widow like Ava Bifulco, a college dropout crust punk who failed to launch and is trapped back in his home neighborhood like Mikey Baldini, or even the local strongman, Big Time Tommie. Gravesend weaved the storylines of three people, and having written two other novels since—The Lonely Witness and A Friend is a Gift You Give Yourself—Boyle has the chops to write from the perspective of a half-dozen people, a decade before the events of his first novel, but only tangentially related.

In the acknowledgments he mentions a hard-to-find film by John Sayles called City of Hope as in inspiration, and I immediately picked up on that. The movie is a favorite of mine, set in fictional Hudson, New Jersey, an ensemble story that leads to inevitable tragedy. Fans of Richard Price will like Boyle’s spare, bullseye focused prose, the leavening of humor throughout the story, and the round-robin nature of the storytelling perspective, which always moves along the plot and doesn’t play Rashomon games or get too clever for itself. Everyone plays their part, even the loser schoolteacher Nick Bifulco, who wants to write a screenplay about the events that open the novel, as seen through the eyes of cop-gone-bad Donnie Parascandolo:

He’s looking at the schoolyard across the street now. A light hangs next to the basketball hoop and casts out a cone of brightness. He sees the chalk graffiti on the blacktop. He’s thinking it looks like a sad painting. The darkness all around, the half-busted hoop, the circle of light, the stillness.

Just then he sees little Antonina Divino emerge from the darkness. Well, she used to be little. She lives around the corner with her father, Sonny, and her mother, Josephine. Donnie used to watch her do laps around the block on her bike. See her with her Hula-Hoop in the schoolyard or playing hopscotch with her friends. Cute kid. Always full of energy. Gotta be fourteen, fifteen now, wearing nothing but a white bra and pink shorts. He can’t imagine what he’s seeing is real. He’s thinking maybe she’s on drugs. He’s about to call Sottile and Pags over.

That’s when Mikey Baldini steps out of the darkness and wraps his arms around Antonina. Mikey’s old man is Giuseppe, who’s in the hole to Big Time Tommy for twenty-five large. On the docket for tomorrow, by pure chance, is a visit to Giuseppe, Big Time Tommy saying it’s time to kneecap the guy if need be. A kneecapping’s the beginning. Then both arms get busted. Then, it comes to it, the guy goes for a swim. Donnie would just as soon skip steps one and two.

This sets up the themes of lost innocence and grief over losing loved ones that are the heart of the novel. Donnie is no angel, but he has endured unimaginable tragedy that tore his family apart and made him a pariah, a self-destructive joker laughing all the way to his own funeral. He revels in his own power and practically begs the universe to unleash karma upon him. It’s a slow-motion suicide, abetted by the open corruption, and the expectation of street justice, that the men will protect their neighborhood, even if they are more dangerous to everyone than scruffy punks like Mikey Baldini.

Boyle tangles his characters in situations that people who live in brownstones and houses packed so close together than you can borrow a cup of sugar by knocking on your neighbor’s kitchen window from your own will understand. In my neighborhood of Avondale, people joked that cheating wives and husbands just opened a bedroom window and jumped into their next-door neighbor’s for a nooner. Like a small-town cozy, everyone here knows everyone else’s business, but there’s no mystery to solve. We know who did what, and the anticipation is waiting for what will happen once the other principals catch up with us. What I especially liked was that the working-class story was not fettered by the usual blue-collar fatalism, that there is no way out of the hole where you came from.

And there’s no nostalgia at play here, no good old days to go back to, except maybe a reference to a girl who was briefly neighborhood-famous for having sex with John Travolta when Saturday Night Fever was filmed there. One of my favorite descriptions is the broke-down palace of Big Time Tommy, the “big shot” who’s not so big:

The club is wide-open and dank, almost feels like a warehouse. Pretty high ceilings. No glass dance floor remains that Mikey can see, but some of the far walls are mirrored, if layered with dust. Narrow standing tables are set up around carpeted beams that run from floor to ceiling, donuts of polished wood where people were once meant to set drinks. A drooping disco ball is suspended from a heavy-duty cord over the center of the room. It looks like a lone planet left from some sort of sad solar system display. It doesn’t reflect any light because there’s no light for it to reflect, but many of the facets no longer have a mirror surface, and the disco ball—which must have once seemed magnificent to dancers below—is patched with dark, empty spots.

Big Time Tommy is sitting at a desk with a half-eaten hero on white butcher’s paper in front of him. Mikey can see that it’s broccoli rabe and sausage.

Mikey is going to work for him, a defeat after dropping out of college. He couldn’t make escape velocity and tumbled back to earth, like a bullet fired straight up on New Year’s Day that kills the person who shot it. There’s a foundation of sadness and loss, but true to the nature of his characters, Boyle deflects the gloom with humor. Joking about Brooklyn kids going to New Paltz for college, slumming with crust punks who live in the woods, in a reverse of the gentrification that turned their borough into a haven for yogurt shops and artisanal picklers.

Our time spent with the characters breeds empathy, not contempt, even with Donnie, whose fate we know is sealed. He’s just trying to ride the wall of death one more time, as Richard Thompson says. A few of the older women characters—of which there are three: Rosemarie Baldini, Ava Bifulco, and Donna Rotante, all women who’ve lost someone dearly—are a little similar to one another, and at first the story of schlub Nick Bifulco chasing the local hero screenwriter is a bit too on the nose, but Boyle makes that subplot pay off with a jackpot finale. City of Margins is not an epic, because Gravesend is not Troy, but more a place like Pompeii, and this story gives us a perfect snapshot of its people like the pyroclastic inferno of Vesuvius’s eruption. Another fine novel from William Boyle in the tradition of John Sayles and John Fante.