October 14, 2019
'Tis the season for hot chocolate and mouthwatering treats. But sometimes too much of a good thing can be downright deadly . . . John Valeri reviews Christmas Cocoa Murder co-authored by Carlene O'Connor, Maddie Day, and Alex Erickson. 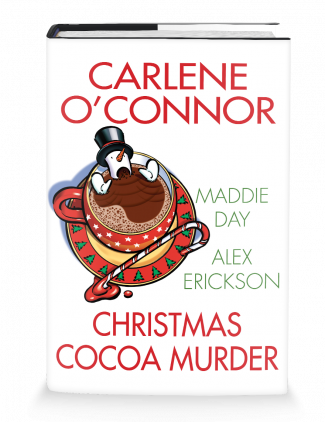 Fall may only have just begun, but the crisp autumn air and ever-darkening sky are but a precursor to the next change: Winter, inevitably, drawing near. And, just as one season transitions to the next, soon pumpkin spice and apple cider will recede into the background as peppermint and hot chocolate reclaim their transient glory. In that spirit, Kensington presents its newest holiday-themed anthology, Christmas Cocoa Murder, featuring festive novellas by a trio of their tried-and-true cozy scribes—Carlene O’Connor, Maddie Day, and Alex Erickson.

Carlene O’Connor—author of the Irish Village Mysteries featuring amateur sleuth/parental sibling Siobhán O’Sullivan—pens the titular story. The idyllic village of Kilbane in County Cork is scandalized when the local Santa/“Santy” is found dead in a dunk tank filled with hot chocolate during the annual carnival. Siobhán, who is set to become a legitimate garda (police) in the New Year, is enlisted to aid in the ensuing investigation. But the more questions she asks, the bleaker things appear; after all, an elf, the neighboring town’s Santa, and two Mrs. Clauses are all candidates for the naughty list. Beyond the cleverly concocted criminal activity, O’Connor imbues her story with atmospheric charm, good humor, and an overriding sense of community. “Christmas Cocoa Murder,” then, firmly solidifies her newly anointed headliner status.

Q&A with Carlene O’Connor, author of Murder in Galway

Maddie Day (the Country Store & Cozy Capers Book Group Mysteries)—a.k.a. Edith Maxwell—is next up with “Christmas Cocoa and a Corpse,” which finds her entrepreneurial protagonist, Robbie Jordan, a person of interest when local businessman Jed Greenberg dies unattended after having been gifted a packet of her Mexican Hot Chocolate. Gossip alone could spell ruin for her restaurant, so Robbie must serve up a murderer and a motive before guilt by association cooks her goose. While the central mystery itself is satisfying, it’s the author’s creative garnishments—including the delightful dynamic between Robbie and her young protégé, Danna, and the mouth-watering menu items they create—that really whet the appetite (or frost the peppermint brownies, as the case may be). These are characters you’ll want to revisit, albeit after the holiday rush has passed. Oh, and did I mention there’s a puppy?

Cooking the Books: Strangled Eggs and Ham by Maddie Day

Alex Erickson (Bookstore Café & Furever Pets Mysteries) closes the book with “Death by Hot Cocoa,” featuring bookstore café owner Krissy Hancock. On a rare day off, Krissy and her BFF Rita eschew holiday preparations to participate in a Christmas-themed escape game staged in a local warehouse. But the allure is lost when their host, the eccentric Lewis Coates, turns up dead in—you guessed it—a slick of hot cocoa. Making matters worse, Krissy, Rita and the other six participants are locked in together until they can solve the puzzle—and a murder. Will the killer strike again … and again … and again? Or will Krissy’s sleuthing skills snare the culprit and liberate this captive audience? Erickson’s sense of fun riffing on the locked room mystery translates to the page, even as he proves that physical proximity doesn’t necessarily equate to coziness.

Christmas Cocoa Murder is a strong collection that unabashedly blends murder and mystery with an intoxicating shot of merriment. But beneath the surface sweetness, there are some bitter truths—including ones related to mental illness, domestic violence, and alcoholism—that the authors explore with aplomb. This is the perfect book for a cold winter’s night. So light a fire, grab a blanket, and pour yourself something hot to drink. Cocoa’s at your own risk …