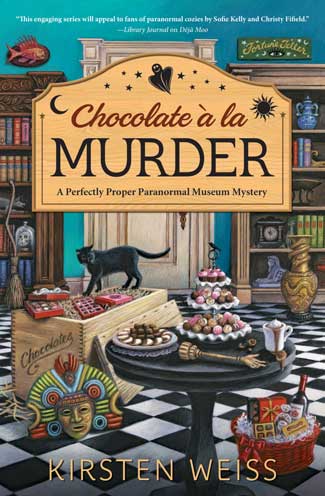 San Benedetto, California, is launching its Wine and Chocolate Days festival—pairing the fruits of the local vineyards with various chocolatey treats—and it features one of the town’s newest businesses, the artisanal chocolatiers Reign. Maddie Kosloski and her paranormal museum are getting into the spirit of things by setting up a display to showcase the Magic of Chocolate—only they haven’t any actual chocolate to sell.

Reign is supposed to be supplying the treats to both her and Adele Nakamoto, owner of the Fox and Fennel Tearoom next door to Maddie’s museum. Adele is, unfortunately, turning into my least favorite type of socially acceptable caricature, the Bridezilla. In order to help manage Adele’s skyrocketing stress levels, Maddie volunteers to swing by Reign to pick up their orders herself.

When Maddie arrives, a person she swears is a Reign employee is out front picketing the store. Maddie sneaks past but, oddly, finds no one inside. Things only go from strange to terrible when she investigates a weird noise from further in the shop and finds a dead body in the kitchen under layers of still-warm chocolate. Her attempts to perform CPR nearly put her off chocolate for life, but not even the arrival of Detective Laurel Hammer—her former bully in grade school and still antagonist—can put Maddie off the trail of a killer who soon shows a sick flair for pranks and violence.

Chocolate à la Murder effortlessly blends some of my favorite topics—murder, chocolate, and a dash of the paranormal—to create a fresh, funny cozy mystery. Don’t worry if you don’t love the paranormal as much as I do; this book is very much grounded in reality, apart from a few spooky incidents that could (probably) be explained away with logic.

That said, I really enjoyed how it introduced me to some cool new concepts, such as hot-chocolate readings done in much the same manner as tea-leaf readings. Ursula, the steampunk psychic Maddie hires for the event, offers to do a reading for Maddie towards the end of the festival, and the results are pleasantly chilling:

“Yes,” I said. Once she’d pointed it out, the chocolate shape did look like a dagger, complete with blood dripping from the blade. An image of [the murder victim] flashed into my head, and I shuddered.

“Usually, that means danger. Real and immediate.” She shivered. “Sorry, I don’t usually have such dark readings.”

I frowned. I’d gotten feedback from all her customers, and none had left frightened or disturbed. They’d all been delighted with their readings.

It isn’t all dark deeds, however! A lot of the fun of the Perfectly Proper Paranormal Museum Mystery series comes from Maddie’s friends, family, and acquaintances. I especially loved Leo’s idea for a podcast (and the hilarity that ensued at their beta test) as well as the way that Maddie uses her connections to dig up information that might help her find and stop a murderer. Here, she is putting pressure on Penny, the president of the Wine and Visitors Bureau, to lend a hand, as Penny doubtfully asks about a recent scare:

“You think the bomb threat is connected to the murders?”

She frowned. “But you’re an associate member of the Wine and Visitors Bureau!”

“That’s outrageous! An attack on one member is an attack on all. We’re like NATO.”

Whoa. Maybe Penny took her duties a little too seriously. I hoped I hadn’t unknowingly signed on to any containment pacts. “So, will you help me?”

She leaned back in her chair. It creaked beneath her bulk. “I wish I could.”

The subplot with the haunted Mexican whisk also added a poignancy to the proceedings that balanced out the lightness of the book with a reminder of the grave tragedy of murder. Overall, this was a blend of plot ingredients I enjoyed as much as a good artisanal chocolate square—in fact, the book had me craving chocolate so much, I had to break out my emergency stash! I’m looking forward to visiting Maddie’s Paranormal Museum again in the future, even without the chocolate theme (though I’ll be heartily glad when Adele gets married and I won’t have to read about her pre-wedding neuroses any longer).