March 31, 2021
In Dane McCaslin's Cat's Meow retired schoolteacher Gwen Franklin has a new pet project—and a sideline in sleuthing. But this new case has a dangerous sting in the tail . . . 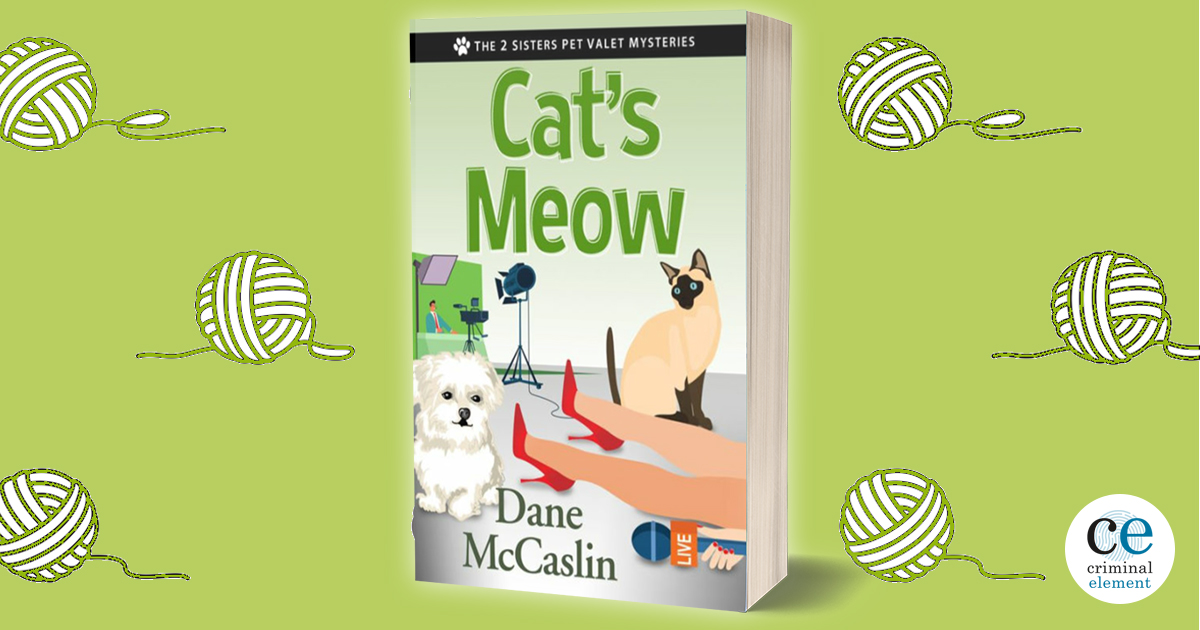 They’re back! Former high school English teacher Gwen Franklin and Nora Goldstein, her much-married-and-divorced sister from another mother, have made such a success of their pet valet service that they’re thinking about hiring another dog walker. Cat’s Meow is the second 2 Sisters Pet Valet Mysteries. Practically a third character is the city of Portland, Oregon and its many coffeehouses, not to mention Voodoo Doughnut. Gwen, Nora, and Brent Mayfair, their faithful, always-hungry, inarticulate dog walker, drink inordinate cups of coffee and consume a dazzling array of scones, coffee cake, doughnuts, and croissants. Cat’s Meow is set in the before-times, so Gwen, wearing her trusty Birkenstocks, valiantly tries to walk off the worst of the sugary calories.

Now that they’re a part of the pet ecosystem, Gwen and Nora receive an invitation to the annual Clear the Shelter celebration. Nora is even asked to present an award. Murder rears its ugly head when Babs Prescott, “Portland’s very own blonde bombshell newscaster,” is found dead before the event. One of Gwen’s former students, Shelby Tucker, “a journalist with the Portland Tribune” and Gwen’s “go-to for help with all things digital,” is the last person to see Babs alive. Which unfortunately makes Shelby the top suspect. The two entrepreneurs know in their bones Shelby cannot have murdered Babs, but they disagree about the why and wherefores. Could it have had something to do with Babs’s recent investigation into “excess spending in education?” Nora certainly doesn’t think so.

“Oh, get the twist out of those granny panties, Gwennie. I just meant there’re bigger stories out there. No one in their right mind would bump off a two-bit Botox babe over something like that.”

“Of course not, but what if they weren’t in their right mind? Wouldn’t that push the killer over the edge? And trust me when I say there’re plenty of people in education who’d fit that description.”

Nora stared at me for a moment, then leaned over and hugged me. “And that, dear Sis, is exactly why I keep you around.”

I snorted as I pushed her away, but I was smiling. “And I thought you kept me around to balance out that crazy life of yours.”

“We balance each other out,” Nora corrected me. “But back to the whole crazy issue. That has to be the reason behind this. I’ve got a feeling right here.” She patted her midsection with a pleased expression.

“Crazy” turns out to be not such a crazy idea. Folding new characters into the mix keeps a series perking along nicely. At the Clear the Shelter evening, the sisters meet Louisa Lovejoy Turner, a wealthy and influential Portlandian. When Lovejoy Turner tells underlings she wants to discuss “business,” everyone assumes she’s referring to her “massive family logging business.” Gwen and Nora are persistent and well-connected but nothing on Lovejoy’s level. When she attaches herself to their investigation of Babs’s murder, doors open, and memories are jogged.

The other new character owns two gorgeous golden retrievers. Roger Smithson had never heard of Babs Prescott and her dazzling smile nor did he know of the connection between Gwen’s former student and the murder scene.

He shook his head almost regretfully. “No, I can’t say that I have. And I’d have liked to have seen her big teeth.” He flashed a grin at me, displaying his own set of pearly whites. “I’m a retired dentist.”

One of the golden retrievers tired of the circling ceremony and flopped on the sidewalk with a loud sigh.

“Well, I’d better get going before I end up carrying these two fellas home. I’d like to how it turns out for your friend though. Maybe we could find a spot and talk while these gents run around.”

“She’s a student, not a friend,” I corrected automatically, and my face heated again. “And yes, I’d like that. We could meet up at the Portland Pooch Park.”

“Then it’s a date.” Roger’s charming smile was back, and so was my racing pulse. Had he used the “d” word?

How dangerous can a 10:00 am coffee date at the Portland Pooch Park be? Lest you think Cat’s Meow is all fluff and caffeine, Gwen and Nora are relentless in uncovering the mystery of who and why someone killed Babs Prescott. They pursue the story she was working on at the time of her death—financial malfeasance at a local junior college—and discover that one of the instructors has an invidious racket underway. Tim LaFoe demands sexual favors from some of his female students in exchange for good grades. There are rumors about him but nothing concrete, not until the Pet Valet duo finds folks who are willing to spill the beans.

Gwen is inspired by her love of classic English detective novels, so much so that Nora often feels like Miss Marple is a ghostly presence in their deliberations. Gwen really does have a well-honed detective toolkit, as readers discovered in Doggone Dead.

Will the vintage mysteries Gwen loves, which fuel her mystery-solving dreams, provide a mystery-solving roadmap? Gwen does have the gift of thoughtful observation, honed over many years in the classroom.

Gwen and Nora are full of vim and vigor—no feet up on the couch retirement for them. They have a business to run and murderers to track down, all with the help of an underground army of Gwen’s former students. A pleasant lagniappe for readers is Gwen’s bemusement at the massacre of English in the hands of some of her students (like Brent): “His texts were enough to send me running to find the nearest grammar book to assure myself the language and its structure hadn’t changed when I wasn’t looking.”

Cat’s Meow is another enjoyable outing from Dane McCaslin, with just enough seriousness to balance out the hilarity.