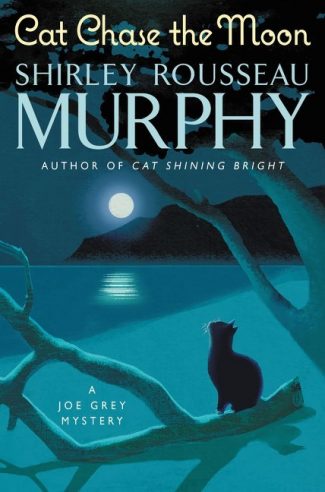 In Cat Chase the Moon—the 21st book in Shirley Rousseau Murphy’s Joe Grey Mystery series—feline P. I. Joe Grey and his friends pounce on three investigations that may connect to one larger mystery, including one case that is very personal.

Joe Grey, one cat in a family of very unusual cats, is performing his usual nighttime patrol when he comes upon a man burying a woman’s body in the sand on the beach. He investigates further, scaring away the man and discovering that the woman is still alive.

A body lay beside the dead tree where dirt had been scooped out. A half-dug grave in which a woman lay nearly buried, bruised and bloodied, fresh earth thrown over her lower body and legs – but she couldn’t be dead, blood still flowed, her heart would still be beating.

Who was this woman? And who tried to murder her and then bury her while she was still alive?

At the same time, other mysteries drew this cat’s attention. A man was visiting the library during story hour and watching the children.

. . .a figure appeared on the balcony among the deepest row of bookshelves. In the shadows he was hardly visible. As on every other Saturday morning, he was watching the children.

Simultaneously, there are a number of robberies throughout town. Some are brazen daylight snatch and grabs, others are burglaries at local businesses. During one of the incidents, a local businessman is killed. What is going on?

Then Courtney, Joe and Dulcie’s talented kitten, is abducted.  The cats bend all their efforts to finding her, which they do accomplish successfully, locating her at last locked in a second-floor apartment.

But Courtney does not want to leave, partly because she has been seduced by promises of fame and wealth.

“You’ll so love living here – until we go on to New York of course. Until you really become famous. Then, oh, you’ll love living in such elegance.”

But Courtney has also found signs of a woman’s presence. Is she the injured woman found half-buried? Courtney resolves to stay until she knows for sure and then escape. But when the woman returns home, she is so kind to Courtney the cat changes her mind. Her family, both feline and human, try to warn her.

Now that Fay’s home, I’m really afraid for Courtney. That woman gives me the shivers. I can hardly stand her. For one thing, she smiles too much, fake smiles. Doesn’t Courtney notice?

The interlocking mysteries are resolved, ending in a wild chase over the rooftops and then across the local roads. Courtney’s abduction, and her subsequent dream, have an important part to play in the resolution of the mystery.

But soon Courtney woke again and sat up, her mind full of the sharpest dream yet; a spark of gold shining among the ragged logs, blood on the sand, and on the grass. She couldn’t make out the golden spark, but she saw moonlight touch a woman’s face, her delicate earlobe ripped and bleeding, torn in half as if by a scythe from some medieval tale, rough steel through tender skin. She saw the vision for only an instant, then it was gone – and that’s when she heard the sound.

Joe and his family are very special cats. Not only do they talk but they all are gifted with special talents. My favorite part of the book is their personalities. Each cat is distinct and, despite the supernatural quality of their gifts, very believable.

Read a review of Cat Shining Bright, Book #20 in the Joe Grey Series.