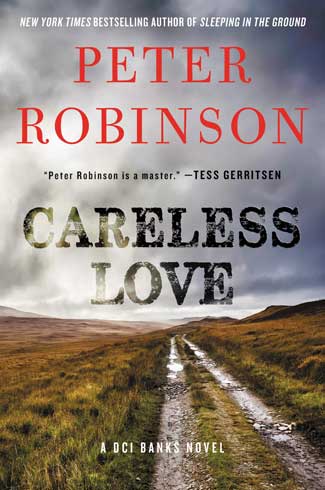 Careless Love by Peter Robinson is the 25th installment of the Inspector Banks Novels series.

The Yorkshire setting gives readers a bit of an armchair holiday. Whether Banks and his team are drinking tasty native brews at the local or tramping over the moors, Yorkshire native Robinson keeps it real. The view alone from Alan Banks’s home is spectacular.

Outside the windows, the long hump of Tetchley Fell loomed black and forbidding in the distance against the night sky, where a half moon shone among the bright constellations. Bank could recognize only Orion, with its hunter’s belt pointing towards Sirius, and the dim glow of the nebula in the bottom half.

The crimes are odd. A beautiful young woman is found dead—presumably a suicide—in “an abandoned car on a lonely country road.” Where’s her mobile or other identification? How did she get there? A few days later, a well-dressed “man in his sixties is found dead in a gully up on the wild moorland” in the vicinity of the first body. There’s no ID on him either. Could the deaths of student Adrienne Munro and businessman Laurence Hadfield be tied together? That’s a question Banks’s poet friend Linda Palmer asks him while they enjoy a lunch in the countryside. It’s tempting to move from a seeming coincidence to proof positive that there’s a connection, but Banks is too seasoned for that.

“No, no. It’s not that. I don’t believe in coincidences any more than you do. It’s one of the first things I thought of, but I’ve learned over the years not to trust first impressions without evidence. It’s just that there’s no obvious connection between the victims, no evidence to tie them together, except they both died rather mysteriously within a short time of one another. They moved in very different circles. If I could find something to link them, anything, it would be different.

Linda’s follow-up is the 64-thousand-dollar question: “What if there was a point of contact? If something brought the circles to intersect?”

There’s more. Banks’s trusted colleague Detective Inspector Annie Cabot reveals a chilling fact that she gleaned from Zelda, her father’s much-younger live-in girlfriend. Banks’s nemesis, Keane, a criminal who tried to kill him, “has returned in a new guise.” In many continuing series, there’s an evil force or person who is a “clear and present danger” to the protagonist, even from the sidelines. Keane’s reappearance adds depth to the plot, but it doesn’t overwhelm the current criminal investigation.

Zelda describes her job as merely looking at surveillance photos and videos—that’s how she spotted Keane. Her work is a window into persistent evil in the world, like sex trafficking. Zelda knows personally of such horrors, telling Banks that there are many “men for whom human life or happiness means nothing.” Banks knows he is fortunate to be alive, but he’s concerned that Zelda’s inquiries will endanger her. Even here, Robinson interjects day-to-day reality. Yes, Zelda may uncover criminal conspiracies, but to her, “it is not a glamorous job.”

“But somebody has to do it, right?”

Zelda finished her ice cream cone. “Yes. At least for the moment. Nobody knows what will happen after this Brexit. We may be able to continue, but perhaps not. There is talk of losing funding.”

“There’s always talk of losing funding. That’s pretty much par for the course with Brexit.”

Robinson’s exquisitely detailed descriptions set his story apart from many police procedurals. For instance, Banks interviews several university students as he investigates Adrienne Munro’s death. Each flat or room, every constellation of roommates, is different in miniscule but significant ways.

Exploring musical preferences is a novel method for gaining insight into characters’ worlds. Adrienne’s choices in music intrigue Banks: “the bulk of her music was classical: Beethoven, Brahms, Schubert, Bach, Tchaikovsky, Mozart, a few Verdi and Puccini operas, even violin works by some contemporary composers like Ligeti, Tavener and John Adams.” She becomes “more interesting the more he found out about her.”

Banks likes classical music too, but when he unwinds after a trying day, “wine and cheese and Chet Baker playing his trumpet” fit the bill. Unsurprisingly, Banks is also a fan of the Grateful Dead. His musical tastes are seemingly timeless. The quote by Greek philosopher Heraclitus, “No man ever steps in the same river twice, for it’s not the same river and he’s not the same man,” doesn’t apply to Banks’s playlists. Banks’s fealty to his musical tried-and-trues leads to many comical and rueful discussions. He’s usually the senior officer in a police car, so he dictates the music du jour—how does that work out when the cops are from different generations?

Banks and Annie made it to the Original Oak in fifty-two minutes, Creedence Clearwater Revival’s greatest hits on the stereo speeding them on their way. He pulled up in a side street near the pub just as “Up Around the Bend” was finishing. Annie gave him a look of relief when the music stopped.

“I’d rather have a bit of Barry Manilow or Neil Diamond, to be honest.”

Annie grinned. “Maybe on the way back.”

If police procedurals that are steeped in accuracy and a dead-on sense of place are your cup of tea, Careless Love fits the bill magnificently.