April 22, 2022
Canary in the Coal Mine introduces Private Investigator Pete Fortunato, a former cop now living paycheck to paycheck in New York City. So, when a beautiful woman wants to hire him to find her husband, he's all in—until Albanian gangsters show up outside his building and kidnap him. 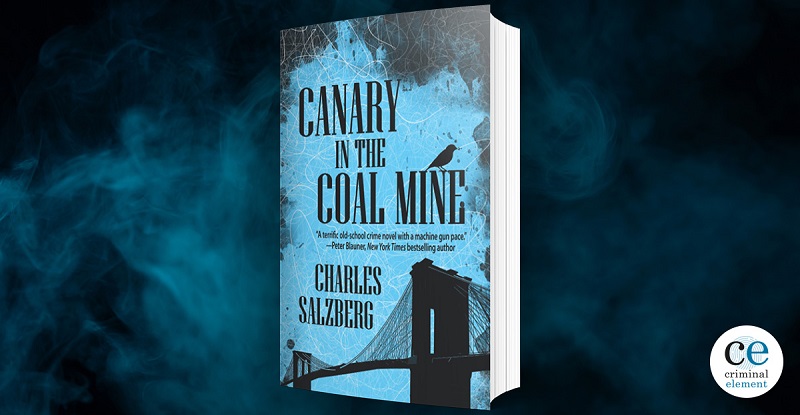 Charles Salzberg had careers in magazine journalism, non-fiction, ghostwriting, and teaching before turning his attention to crime fiction with the Shamus Award-nominated Swann’s Last Song—the first of five in the series. His other works include the standalone novels Devil in the Hole and Second Story Man, which won the Beverly Hills Book Award; he has also contributed novellas to the collections Triple Shot, Three Strikes, and Third Degree. This April, Salzberg—who is a founding member of the New York Writers Workshop, where he also teaches—debuts a new creative canvas with Canary in the Coal Mine.

The story—its title in reference to that feeling of impending, if indeterminate, doom—introduces New York City Private Investigator Pete Fortunato, whose dreams of a career on the pitcher’s mound were dashed by injury. After a brief (and mutually disagreeable) stint as a cop, he found that being his own boss was more suitable. Consequently, Pete occupies a desk at a friend’s real estate office and ekes out just enough work to pay his studio apartment rent from month to month. It may not be everybody’s ideal situation, but it works for him. After all, he’s got anger management to keep up with and infinite sources of potential conflict.

Pete’s between jobs when he is approached by red-headed bombshell socialite Lila Ashton, who wants him to find her missing husband, Donald. Her generous monetary advance convinces him to take the case, reservations be damned. Both Lila and Donald have lovers on the side—which only kind of accounts for Pete’s finding Donald dead in Lila’s paramour’s bed. Job done—the man has been found, after all—Pete is ready to move on when said paramour, wannabe actor Travis Chapman, approaches him in need of help. You see, Travis and Lila’s husband were in cahoots on some shady business dealings and now he’s been left holding the bag. When the Albanians come calling, Travis skips town—and it’s guilt by association for Pete unless he can rectify the situation.

Given his wish to remain among the living, Pete must track Travis down and convince him to return to New York—all the while trying to figure out how to save their lives and return whatever it is that went missing (it’s gotta be money, right?). The ensuing Odd Couple bit is riotous; even Pete can’t help being amused by Travis—at least in the moments he’s not completely annoyed by him. This comedic caper is told exclusively through Pete’s (appropriately cynical) point of view, its pace unrelenting despite the internal monologues and digressions. This cerebral calisthenics never fails to entertain while also serving as a springboard for character development and social commentary.

Canary in the Coal Mine is Charles Salzberg at his best. The mystery is intriguing enough to keep you turning pages but it’s the wise-ass, witty repartee that really sticks. Those things coupled with the character’s quirks and compunctions prove that Pete Fortunato is worth revisiting (hint, hint). If you like noir, you’ll love this hardboiled, humorous tale.