Book Review: You Can Go Home Now by Michael Elias 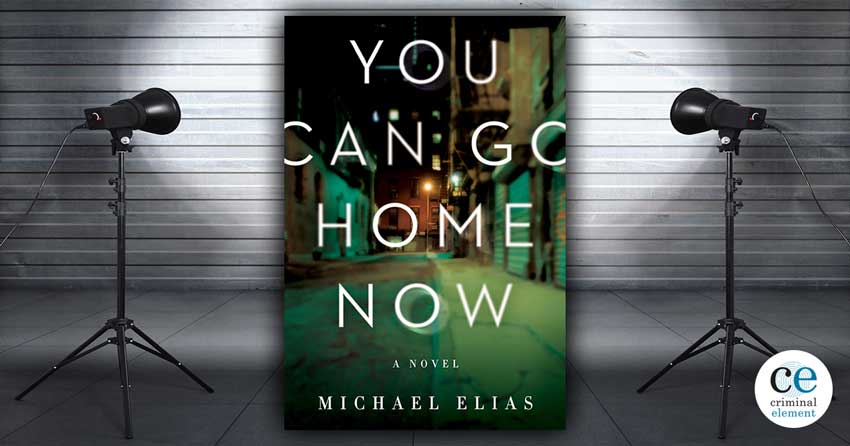 You Can Go Home Now by Michael Elias is a smart, relevant, unputdownable psychological thriller about a woman cop on the hunt for a killer who’s battling violent secrets of her own.

Equal parts police procedural and psychological thriller, Michael Elias’s You Can Go Home Now is an intriguing experiment with genre and form. Our heroine, NYPD Detective Nina Karim, was scarred as a 15-year-old by witnessing the death of her physician father who was murdered by a sniper’s bullet while washing dishes in the kitchen sink one evening. With her family fracturing under their grief and the inability of law enforcement to find the perpetrator—much less bring the killer to justice—Nina abandons her plans of college and English degrees in favor of the police academy after an old family friend retired from law enforcement tells her that a cop has access to the kinds of resources and databases she can only dream of as a civilian. Nina won’t rest till she’s found her father’s killer and returned the favor, preferably in the slowest, most agonizing way possible.

I realize these are the musings of revenge. They spring awake at three in the morning, erasing the Ambien, accompanied by despair and loss. These musings oppose justice, law, and civilization. I know that part of me. I know the desire for revenge is barbaric. It is also the rage of a teenager. I am glad I was fifteen when my father was murdered. If I had been older, more mature, I wouldn’t have that obsession; it wouldn’t be imprinted in me, made permanent, that desire to avenge him.

Now I am a police officer. My duty is to find and arrest people who break the law. I agree that is up to the state to dispense justice in every case—except mine.

Aside from that, she’s mostly a decent cop and an even better detective who’s just caught the case of the missing Ronald Steevers. His parents are concerned that he hasn’t shown up to either their house or to his job in several days. They’re significantly less concerned that his wife has also disappeared. Nina tries to explain to Ronald’s parents that the disappearance of an able-bodied adult male with no sign of foul play isn’t usually a high priority for the police, but then their worst fears come true: Ronald’s corpse is found in an abandoned warehouse, shot through the head, with the bullet subsequently dug out to eliminate ballistic identification.

Even though the case has gotten far more serious, there aren’t a lot of leads despite Ronald having his fair share of enemies. For starters, no one at his job liked him, and his co-workers are more than happy to gossip about him, letting Nina know in no uncertain terms the reasons for their distaste.

“Look, it’s a question of authority, isn’t it? Ronald was the boss. Okay, we all got it, but we’re not the Marine Corps—we’re selling paint; we all work together to make the customer happy. Ronald saw it as we all work to make him happy. He used to say that about his wife. It was her job to make him happy. He talked about her dedication, how she had her duties, how she went out of her way to please him. She knew her place, and he used the s word.”

I was thinking suck.

Once said wife Susan finally turns up, she’s initially cagey about her whereabouts around the time Ronald was killed. She eventually admits that she was in a women’s shelter called Artemis and that there’s plenty of video footage from the tightly secured building to give her an alibi. Ordinarily, Nina would consider this a dead-end until a routine look at several cold-case files causes her to believe that Artemis might somehow be involved in Ronald’s murder. Soon, she’s going undercover as a battered wife to discover if there’s any truth to her suspicions, even as a break in her father’s case demands that she jeopardize everything else in order to fulfill her life’s mission.

Coming in at under 300 pages, this relatively short page-turner of a novel arrives at an interesting time in the American public’s relationship with our police forces. Mr. Elias is unafraid to show the underside of American policing, displaying how a system that attracts bullies and entrenches chauvinism can harden and coarsen even the best-intentioned applicants. Nina herself is a flawed protagonist who has to tackle the question of advancing what she knows is right versus what she knows is ethical—as well as consider what she owes to a society that too often fails its most vulnerable. You Can Go Home Now is a timely meditation on justice and retribution that will long stay in the memory, in no small part due to its moral complexity.