May 24, 2022
In Tamara Berry's series debut Buried in a Good Book, thriller writer Tess Harrow—who knows way more than anyone should about death and dismemberment—is plunged into a real-life murder investigation. 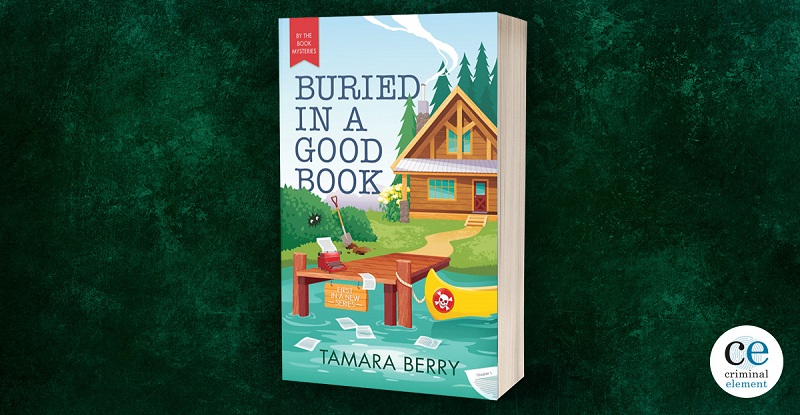 Thriller writer Tess Harrow has packed up her fourteen-year-old daughter Gertrude and fled to the hills of Washington State in the aftermath of her contentious divorce. Having inherited her grandfather’s remote rural property, Tess figures a summer living without easy access to the Internet is just what she needs to work on her next book—and what Gertie needs to blunt the pain of a dad who seems to have left behind his only child along with his ex-wife.

Tess’s imagination is already spinning up various story ideas as she and Gertie arrive at the cabin, but nothing prepares either the wisecracking author or her long-suffering daughter for the series of explosions that rock their new, temporary home. Running outside to see what’s happening, they discover someone dynamiting the pond behind their house, just as a body part falls from the sky and smacks Tess in the face.

Tess is further disconcerted by the subsequent arrival of Sheriff Victor Boyd, who’s a dead ringer for the hero of her bestselling series. Sheriff Boyd is well aware of this resemblance, and while he’ll only reluctantly admit to being a fan of her writing, he does have lots to say about her misrepresentation of proper law enforcement protocols in her books. In fact, he’s such a stickler for the rules that Tess is worried that he’ll never get to the bottom of who murdered the person found in her pond. Until, that is, she has an epiphany:

Tess held herself perfectly motionless, unwilling to shift by so much as an inch. She wouldn’t give Sheriff Boyd the satisfaction. He was, of course, perfectly right. It was a lot easier to solve crimes when you didn’t have to bother with things like rules and regulations—when you weren’t prevented by a badge and an oath of honor from nosing around where you didn’t belong. It made for terrible fiction, but that wasn’t the point. For once in her life, she wasn’t thinking about her book. Sheriff Boyd, a cop who unquestionably understood privacy laws and stuck to them, wasn’t what this case needed.

By hook or by crook, Tess is determined not only to help him figure out who killed the person left in her pond and why, but also to investigate the case of the alleged Bigfoot roaming through the woods and scaring the locals. Alas for Tess, solving mysteries, as she soon discovers, isn’t quite as easy as making them up—especially when she’s on deadline and has a daughter to single-handedly look after. Fortunately, said daughter rises to the occasion, albeit grumpily, as when Tess and her new friend Nicki are brainstorming ideas to gain quasi-legal access to a recently vacated home:

“Ohmigod, you guys.” Gertrude sighed and unfolded her legs from the end of the bed. Tess could have sworn that those legs had grown at least two inches since they’d arrived. “If it was a rental, just go to her landlord and ask to look around. Pretend you want to rent it now that it’s empty. No one will think that’s weird.”

Tess and Nicki’s eyes met in a moment of shared excitement—and chagrin. The latter was mostly on Tess’s side. Not because her daughter had just outsmarted her, but because drawing an impressionable teenager into her criminal enterprise wasn’t going to win her any parent of the year awards.

As the body count rises, Tess’s sense of adventure is dampened by genuine fear for her daughter’s well-being. The sudden arrival of her ex-husband could prove either a blessing or a curse. Sure, it makes more sense for him to take Gertie back to the relative safety of Seattle. But would a separation damage their mother-daughter bond irreparably? Of course, no separation is more permanent than the death promised by a killer stalking the woods, ready to take out any meddlers, famous authors included.

I loved every minute spent reading this hilarious, fast-paced yet tender and sensitive mystery. I’m a big fan of Tamara Berry’s from her outstanding Eleanor Wilde mystery series, and fell in love just as deeply with the characters here as I did in those books. The banter is fresh, funny, and realistic. The plot twists are smart and believable. I laughed out loud a lot, even as I kept turning the pages to see what would happen next. Ms. Berry has written another superlative humorous mystery novel that never eschews emotion or logic for a punchline. You must treat yourself to her wonderful writing if you haven’t yet had the privilege of reading her work.