Book Review: Bryant & May: The Lonely Hour by Christopher Fowler

December 9, 2019
Bryant & May: The Lonely Hour is the eighteenth book in the Peculiar Crimes Unit Series, and the formidable partnership of Arthur Bryant and John May, the two elderly detective chief inspectors, may finally be drawing to a close. 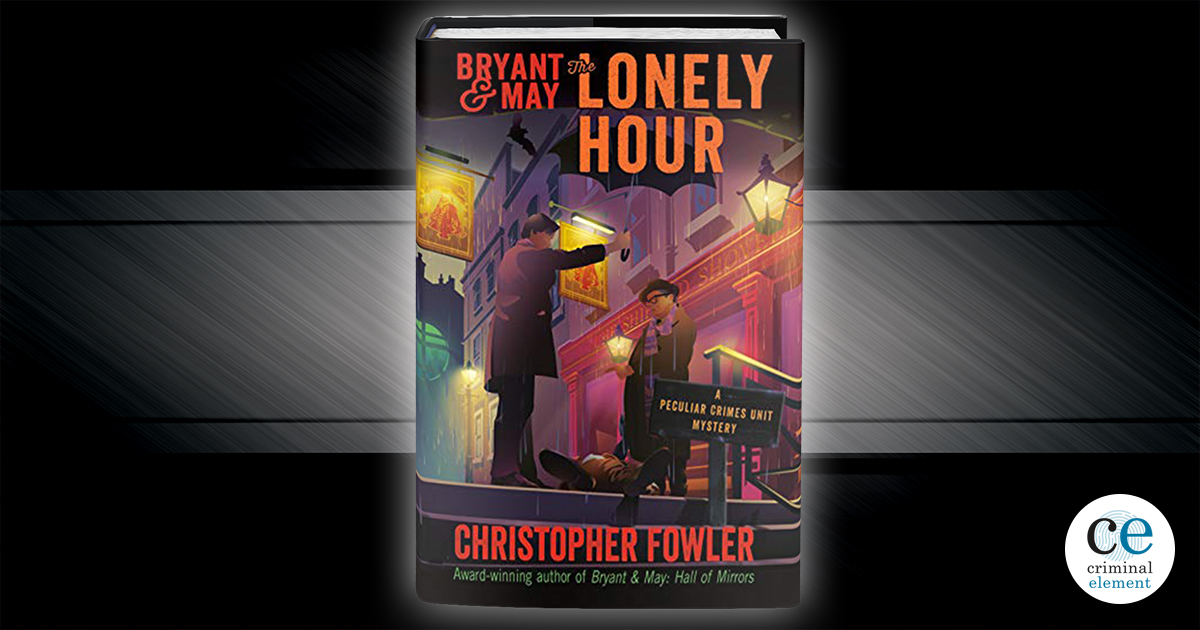 The tidings of doom as this novel begins are coming less from actual fact than from a psychic acquaintance of Bryant’s whom he’s only too happy to insult as a cut-rate Cassandra. Still, Bryant can’t help but worry. Theirs is a partnership that relies on the other for balance, though the less generous could claim that it’s really eccentric, abrasive Bryant who needs May more than the other way around:

There remained about Bryant something twinkling and primal, a light burning in the ignorant darkness that might guide you home safely or set everything ablaze. Even his partner was never quite sure which way things would go.

John May got out and locked the car. Of him, gentler things were spoken: that he was a little younger, more charming, empathetic and humane. He understood a fundamental truth, that decency makes one a little dull, and was peacefully resigned to his role. He was the straight man in a music hall duo, the foil who made the comic palatable. A complementary pair of opposites, then; one destined to be loved, the other to be remembered, but always coupled together like the names of old-fashioned department stores or the ingredients in pies.

As their latest case unfolds, however, both detectives definitely have one thing in common: an unusual state of distraction indicative of drifting apart. They’re communicating less frequently even as they share the goal of bringing justice to the culprit behind the ritualized murder of a young man on Hampstead Heath. Dhruv Cheema was found hanging upside down from a willow tree, his throat cut open, surrounded by the paraphernalia of black magic. When another young man is found dead, fished out of the river after an apparent suicide, Bryant quickly claims the second death is related to the first, despite skepticism from his fellow investigators. But as the bodies begin to pile up, with the single known point of connection being that each attack happens at 4 a.m.—the lonely hour, in military parlance—it seems that Bryant is right, as usual. Soon the race is on to stop a ruthless killer from taking more lives in the dark.

We actually find out the identity of the murderer early on in the novel: the main mystery lies in the why, which is slowly unraveled over the course of this wildly entertaining book. Granted, parts of the solution may look more obvious to younger folk than to our older detectives, in much the same way that the killer was flummoxed by the generational divide that more or less sets off this tale of grief and vengeance. It’s to Christopher Fowler’s credit that he provides that contrast and acknowledges it frankly while weaving it seamlessly into his narrative.

Fowler also continues his excellent work chronicling the endlessly fascinating minutiae of the city of London. Interspersed with the murder mystery are excerpts from Bryant’s idiosyncratic walking tour guide, which reveal both a boundless knowledge and affection for the great metropolis:

At night London is a sea of crimson eyes.

Look–you can see them everywhere. They peer down from the starless sky, clustered as tightly as pins on a map of the constellations. They mark the tops of the cranes that drift on the night currents and stalk the city like metal mantises, always with one red eye open to watch over the streets.

The cranes are a sure sign that whatever you’ve read or heard to the contrary, London is booming. London is always booming, because of where it is and what it was and what it has become, the sprawling home to nearly nine million people.

Poetic and evocative, the myriad glimpses into London life had me greatly missing a city I’ve always been fond of but have had only a very few days as an adult to explore. Reading Bryant & May: The Lonely Hour felt like living a love letter, not only to a magnificent city in all its dirt and glory, but also to an unconventional detecting partnership that may have been dealt a deadly blow. Die-hard fans will either love this installment of the series or scream bloody murder: regardless, we’ll all be eagerly awaiting the next book in order to find out what lies in store for our beloved investigative team.