December 15, 2021
With the Peculiar Crimes Unit on the brink of closing down in the latest entry in Christopher Fowler's inventive series, the brilliant duo of Arthur Bryant and John May uncover a nefarious plot behind the seemingly innocuous death of an old lady. 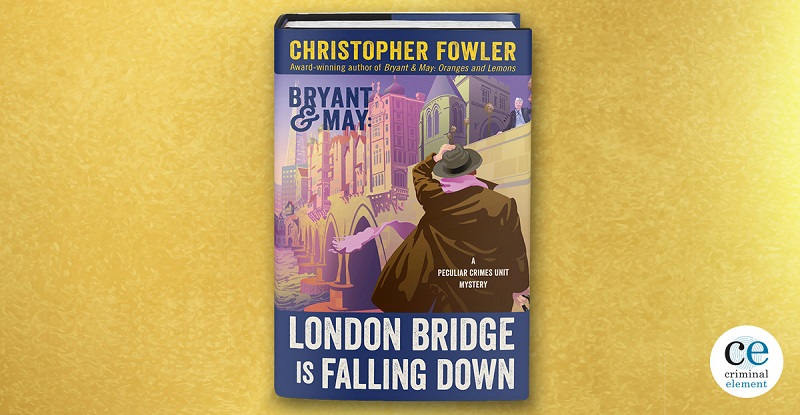 In this perhaps (but hopefully not) last installment of the Bryant & May: Peculiar Crimes Unit series, we learn a lot more about the murky past of the Peculiar Crimes Unit (PCU), even as they face an uncertain future. The Home Office has finally succeeded in its intent of dismantling the unit and is stripping the building at Caledonian Road of anything remotely government-funded even as the remaining officers glumly face the specter of unemployment. Having the unconventional posting on their CVs has made them undesirable to the rest of British policing; plus none of them really want to acknowledge the fact that their beloved team is finally meeting its end, the stated enthusiasm of Chief Raymond Land for retirement on the Isle Of Wight notwithstanding.

So everyone perks up considerably when Detective Chief Inspector Arthur Bryant comes up with a solution. As their unit may not be officially closed while they still have an active case, he requisitions a sheaf of current files from the forensic pathologist they share with the city and tasks the team with figuring out whether any of these seemingly innocuous deaths were actually murder. No one really expects to make much investigative hay out of these records until Bryant zeroes in on the unattended death of Amelia Hoffman, an elderly woman who died alone of starvation in her pristine flat.

The case causes a minor sensation when the press gets wind of it—how could the British social net have so thoroughly failed a poor old pensioner? But only Bryant has the vision to see that something even more sinister is afoot. Soon, the entire team is digging into Mrs. Hoffman’s life, not only from just before she passed but also from decades earlier when she worked in British intelligence. Bryant is able to deduce quite a bit about her from the few photographs that the team manages to discover:

‘These two, the grey-haired woman and Mrs. Hoffman. They’ve known each other for a long time, at least thirty years. The younger annoyed-looking one is a vegetarian living in Central London, comfortably off, intelligent, likes a drink and a show. Very patriotic. They probably all worked together at some point. When Mrs Hoffman ran out of money the other two topped her up. Old friends then, but their ages are a decade apart at least, which means they didn’t meet at college. Mrs. Hoffman was religious and once worked in a circus.’

[His colleague] Dan looked doubtful. ‘Where do you get all that from, Sheer-Luck Holmes?’

It’s never luck, of course, when it comes to Bryant. His keen eye for detail and his ferocious intellect combined with his wide-ranging network of informants, help him make connections almost anyone else would miss. But what will he do when all the evidence points to a secret relationship between himself and Mrs. Hoffman, who possessed explosive information that more than one person would kill to gain access to?

Inasmuch as this series is a love letter to London, this book, in particular, serves as an encomium to our favorite eccentric, if exasperating detective. Bryant is facing the end of his career while needing to investigate not only its beginning but also the connections and motives that have underpinned almost all his efforts to date. It’s a fascinating deep dive into who he truly is and why he persists in his work despite being long past the age of retirement:

And what could be said of Arthur Bryant that had not already been uttered in anger, disbelief or devotion? His brain was as young as his body was old, his manner was rude, his behavior unpredictable, but his eyes showed kindness and curiosity. He had a creased, comfortable face, boisterous dentures and the physical elegance of a bin bag. How was it possible, everyone wondered, for him to remain so resolutely optimistic in the winter of his life? Bryant knew that the world belonged to those who did not do as they were told, so he never did. He took the view that evil would triumph if good people did nothing, so he always did something.

But the PCU isn’t just one man, and the personal and professional struggles of the rest of our delightfully offbeat crew each get their turn in the spotlight as they wrestle with this chapter in their careers. Perhaps the most intriguing to me was the involvement of the newest member Sidney Hargreaves, who brings a very 21st-century sensibility to the proceedings.

I really do hope this isn’t the last we’ll see of the PCU. Despite the pessimism of Bryant’s editor Simon Sartorius, there is always room for comic crime capers on the bookshelves of discerning readers, with Christopher Fowler’s books having long been on the forefront of the subgenre. Here’s to many more tales of our intrepid heroes as they solve seemingly impossible crimes, in the most entertaining fashion.