December 17, 2019
In Alexander Hartung's Broken Glass, translated by Fiona Beaton, one person is murdered, and one missing. Both are almost identical. Detective Nik Pohl has seen every shade of darkness in his career. Not used to playing by the rules, he finds himself frozen out by his superiors, but now he's being blackmailed by a shadowy businessman into investigating a seemingly crimeless disappearance. 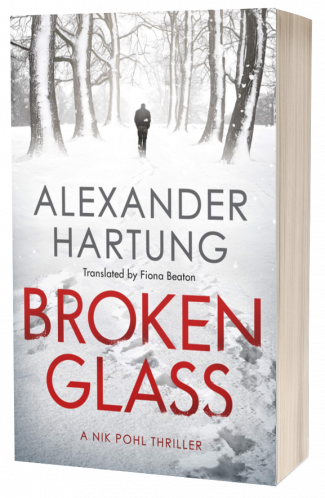 With a seamless translation from Fiona Beaton,  Broken Glass by million-copy-selling German author Alexander Hartung is a winner and hopefully will gain him a following here in the U.S. Nik Pohl is a grizzled loner of a detective—think the German equivalent of Jo Nesbo’s Norwegian Detective full of issues, Harry Hole. However, the case he is currently on is going to sober him up quickly as it is so bizarre that it will require him to be laser-focused to see it through to the end.

‘The sight of the dead girl brought him nothing but sorrow.’  With those chilling lines, Alexander Hartung reels us into his latest Nik Pohl story and lets readers share the pain the speaker of this line feels. It does not take long until readers will recognize that the Prologue refers to one of two young women—one who has already been found murdered and another who is currently just ‘missing.’ The similarities between the two is what drives both the narrative of Broken Glass as well as the investigation led by Nik Pohl.

Of course, Pohl continues to knock on doors of important and influential people—doors that others wished to keep closed.

Viola Rohe has been reported missing by her family. Nik Pohl is taking on the case knowing that he is on thin ice with his department. Any other mistake could see him kicked out of service without any pension. Pohl sets himself intently on the Viola Rohe case. He takes advantage of his photographic memory to eliminate names of potential suspects in both this and another, older case he worked on. Pohl recognizes that the answers to the Viola case may exist in another murder case where a young woman named Katherin Glosemeier was killed by a blow to the head. The coroner wrote it off as a ‘climbing accident,’ but Pohl knows something far more sinister was at play which could potentially break open the Viola Rohe investigation as well as re-open Katherin’s murder case. The problem is that the people he speaks to regarding Katherin are beyond adamant that they do not wish for that case to be re-opened. In fact, the person responsible for the autopsy is so eager to get rid of Pohl that she actually hits herself in the head hard enough to draw blood just to get him to leave her home before she accuses him of assault or worse. In all my years of reading mystery/crime fiction, I had not read a detective/interviewee passage so hostile (on the side of the interviewee) than this one. Hartung really knows how to write an intense scene!

Of course, Pohl continues to knock on doors of important and influential people—doors that others wished to keep closed. This gets him the inevitable suspension from his department but does not end his personal participation into this case. He carries on his shoulders the lives of two different young women—Katherin and Viola—and things have gotten extremely personal for him in both cases. When another woman—Olga—goes missing, he really feels like it is a race against the clock to find both her and Viola before they become murder victims.

Broken Glass is not your ordinary crime thriller and Nik Pohl is far from your ordinary Detective. Readers get a nice glimpse into modern-day Berlin, a city with so much history that any Detective would find the solution to a case to be ponderous under the weight of so much pressure that the past lays on you.  This is a fresh and unique crime/mystery series that is definitely worth checking out and a must for fans of authors like Jo Nesbo and Val McDermid.