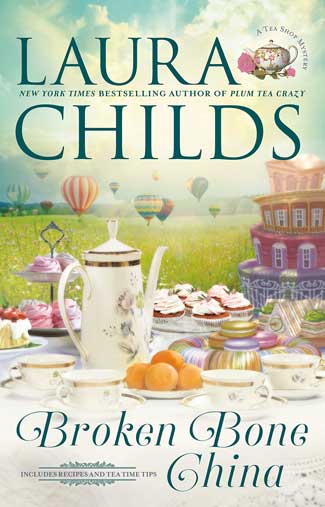 Nothing is more normal for Theodosia Browning, “the proprietor of the Indigo Tea Shop on Church Street,” than to “host weekend tea parties” at various locations in Charleston, South Carolina. Often, she is accompanied by Drayton Conneley, her in-house tea sommelier. What could be more pleasantly genteel and refined than an outdoor tea at Hampton Park? Going up, up and away in a beautiful balloon perhaps? Drayton is not a fan, as he tells Theodosia when she proclaims it is the “coolest thing” ever.

“No, it’s terrifying,” Drayton Conneley responded. He’d wedged himself into the corner of their wicker basket, teeth gritted, knuckles white, as he hung on for dear life. “When you talked me into serving afternoon tea for the Top Flight Balloon Club, I had no idea you’d twist my arm and make me go for an actual ride.”

Living dangerously takes a fatal turn when Drayton and Theodosia spot a “whirligig thing” swooping and hovering beside each balloon, almost as if it were peering inside each basket. It’s a little drone with a camera; its circling maneuvers give Drayton the “heebie-jeebies.”  Suddenly, it picks up speed and flies right into a red-and-white balloon.

Theodosia threw up her arm to shield her eyes and then watched in horror as the red-and-white balloon was ripped wide open, top to bottom, like a hapless fish being gutted.

Tongues of ugly red and purple flames roiled and twisted, practically drowning out the screams of the hapless passengers. Then the gigantic balloon exploded in a hellish conflagration, sizzling and popping and wobbling for a few long seconds.

On a final, gruesome note, “The balloon and its seared basket smashed down on top of Theodosia’s tea table.” Theodosia and Drayton’s pilot slams their basket into the ground, getting them to terra firma and safety with dizzying speed. A hard rain pours down while “anger and outrage bubbled inside Theodosia.”

Broken Bone China is Laura Child’s 20th “Tea Shop Mystery,” and readers know that Theodosia is a dab hand at solving mysteries at the same time she runs her delightful tea emporium. The local constabulary knows that too, and they’re hardly surprised that she witnessed the drone attack. Theodosia might be willing to sit out investigating this high-tech, deliberate drone killing, but when the police share behind-the-scene details, she’s intrigued.

During the interview she learns that one of the downed occupants was Don Kingsley, the CEO of a local software company, SyncSoft. Not only do the police suspect Kingsley as the primary target, they learn that he possessed a rare Revolutionary War Union Jack flag that several people were rabidly bidding on.

The juxtaposition of an airborne assassination and an antique flag worth many millions of dollars is one of the pleasures of Broken Bone China. Tourists with a yen for history and antiques have made a beeline for Charleston for decades, with King Street in the heart of the historic district being a top destination. Charleston is practically a character in Broken Bone China.

Any walk in Charleston is a scenic, practically cinematic walk. There are block after block of elegant mansions, walled gardens, historical markers, old churches, fountains surrounded by riots of greenery, and narrow cobblestone alleys.

No wonder Theodosia says to Drayton while they’re on their way to interview a potential person of interest that wandering through the back streets is like being on “a treasure hunt.” While Theodosia learns more about the circle of rabid bidders for the suddenly missing flag, life goes on at her “sparkling jewel box of a tea room.”

Several years ago, Theodosia left the corporate world of marketing, determined to open a specialty establishment—more than a place for a cup of tea and a scone, rather, a jewel of destination featuring “elegant cream teas, luncheon teas, and high teas.” There’s no trace of the “former stable and blacksmith shop” it once was. Theodosia is blessed in her staff, which she acknowledges to herself daily.

Drayton as tea master had also been a rare find and a true complement to her shop. Haley, her chef and baker, had been a lucky strike. Now, after almost a half dozen years together, they operated as a well-oiled machine.

Dead entrepreneurs, greedy ex-wives, and sharp-throated antique dealers notwithstanding, the show must go on. Theodosia knows her customers will be anxious to discuss yesterday’s hot-air-balloon disaster, so she considers her table setting options.

Theodosia pulled out a set of Spode china in the Golden Valley pattern, and decided the gold trim and purple-and-green peaches and pears would be the perfect antidote to such a rainy, gloomy day.

Drayton and Haley have tag-teamed with Theodosia in solving many mysteries over the years as well. The trio is adept at making connections between new and old money, noting who is renovating and at what cost—generally sussing out the delicious details that inform investigations. Other than the mystery surrounding Don Kingsley’s murder, the constants of the story are tea, china, food, antiques, parties, and of course, Charleston!

Laura Childs is such a generous writer: in an elaborate index, she gives recipes and recommendations on how to become a tea connoisseur, including how to throw one’s own Beaux Art Tea or a Nancy Drew Mystery Tea. Pour a carefully-steeped cup of your favorite tea and settle back to enjoy Broken Bone China.