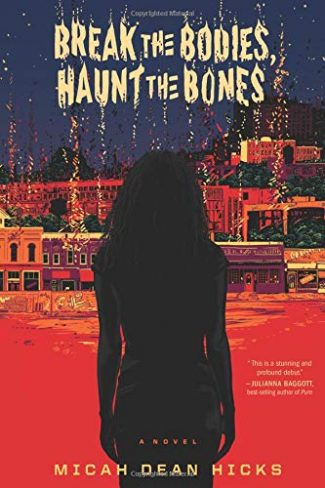 Break the Bodies, Haunt the Bones

Break the Bodies, Haunt the Bones by Micah Dean Hicks tells the unsettling story of Swine Hill, a dying American town plagued by ghosts both real and imagined.

Micah Dean Hicks’ debut novel is, like the pig men that populate its pages, a strange, discomforting hybrid. It’s an allegorical autopsy of what could be any dead or dying American town. But it’s also an ambitious piece of weird fiction so extreme in its exaggerations that, at times, it becomes a mirror for our current political client. And it’s a supernatural thriller, rife with genuinely chilling moments and frustrating, heartbreaking characters faced with impossible choices. It’s a dense, challenging and, if you’ll pardon the pun, meaty book.

Break The Bodies follows Jane, a young black woman who works at the only supermarket that remains open in Swine Hill. The town is dying — most of the businesses, apart from Pig City, the meat processing plant that rests on a hill on the outskirts of town, have closed — but in many ways, it’s already dead. Houses are abandoned, and the downtown is vacant, except for the legions of ghosts that haunt everything. Swine Hill’s dead haunt buildings, streets, objects, and people — Jane is possessed by the ghost of a young girl who revels in reading others’ thoughts, while Jane’s brother, Henry, is controlled by a spirit who makes him invent machines both fantastic and monstrous.

During a night shift at the store, Jane encounters a stitched-together man-pig hybrid — a sight that manages to be terrifying even in Swine Hill, where phantoms are a visceral presence.

Jane tried not to look at his snout or ears. He pressed against her counter, smelling strongly of metal and blood. She felt surrounded by him, his towering height, his shadow, his bellows breath.

She rang up six hundred dollars worth of meat, then bagged groceries while he fumbled a wallet out of his pocket and carefully tweezed it open with brutish fingers. He handed her a Pig City company charge card. The name on it read “Walter Hogboss.”

Hogboss is the plant’s new manager and the harbinger of Pig City’s new workforce. It’s a change that doesn’t sit well with Swine Hill’s citizens, living and dead. And it doesn’t help that Henry and his ghost seem to be behind the sudden appearance of the pigs. It’s difficult enough to keep themselves safe in Swine Hill even during the best of times, and Jane and Henry find themselves in increasing danger as Swine Hill’s denizens grow angrier and more violent as the town changes.

That’s only a fraction of the ideas that Hicks tackles in Break The Bodies. The novel’s concept, and Hicks’ prose, are strong enough to fold in dozens of big ideas, from racism and poverty to police brutality and manufactured nostalgia. Readers of Jeff Vandermeer, Kelly Link, or Carmen Maria Machado will feel at home in Hicks’ prose. The pig-men — designed by Henry at the request of Pig City’s unseen corporate overlords — are part of a new race of “self-slaughtering pigs” set to take over operations at meat packing plants all over the country. It’s a gross, darkly hilarious exaggeration, but it’s not so far out there, considering the indignities of the gig economy and other excesses.

There are no solutions to these problems and few avenues of escape for the characters, and much of the book’s momentum comes from the series of increasingly impossible choices Jane and Henry have to make. Jane wants to save her family and escape Swine Hill, while Henry wants to fix his mistakes and, ultimately, fix the town. But Swine Hill’s problems are so deeply rooted in its streets, its buildings, its people that there is nothing to save.

Break The Bodies is a bleak book, and its relentlessness can, at times, be taxing. But there are moments of transcendence and hope seeded throughout and some truly gorgeous passages. Hicks’ prose is clear and tight, even poetic at times. At a high school prom, a ghost and pig-person dance together and captivate the crowd, while Henry and a girl whose ghosts have literally made her paper-thin share a tender first kiss. Even small moments like this passage pack a punch:

Little puffs of what seemed to be steam twirled from cracks in the asphalt. Henry covered his mouth, held his breath involuntarily.

But there was no fire. The heavy haze was only the dead; Pig City drowning in spirits like the river Styx.

Hogboss came around and opened Henry’s door. “They won’t hurt you. Pig City’s ghosts are here to work. They’re quite content.”

Through it all, though, Hicks maintains the expert plotting of a supernatural thriller. Danger — in the form of ghosts, possessed police officers, angry townsfolk and jilted lovers — stalks Jane and Henry. Dread hangs heavy over the book, but it never feels entirely hopeless. That Hicks manages this difficult balance while keeping the plot surging forward is nothing short of impressive. Break The Bodies, Haunt the Bones is challenging but worth sticking with, a book that will haunt you long after you’ve finished it.