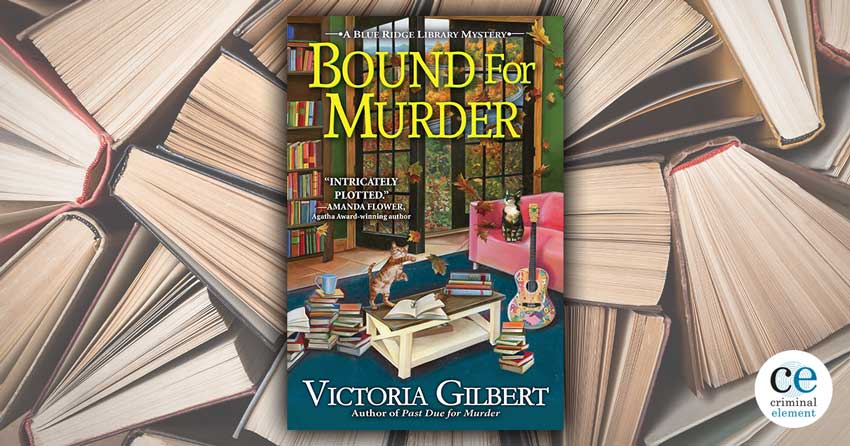 Bound for Murder by Victoria Gilbert is the fourth book in the Blue Ridge Library Mystery series, where library director Amy Webber learns it wasn’t all peace and love among the “flower children” when a corpse is unearthed on the grounds of a 1960s commune.

Bound for Murder is a cozy mystery set in Taylorsford, Virginia, a bucolic town in the Blue Ridge Mountains. Victoria Gilbert grew up on the Blue Ridge and—like her heroine, Amy Webber—is a professional librarian. The lively and quaint coexist in Gilbert’s fictional town that’s “dominated by elegant turn-of-the-century Victorians.”

On this September day, the air was heavy with the spicy fragrance of late-season flowers, blooming profusely as if staking a valiant stand against the coming frost. I gazed up into the canopy of trees that lined the sidewalks. As it was still so early, autumnal color barely tinged the tips of the green foliage.

Reality, in the form of a toe stubbed on crumbling concrete, intrudes. Taylorsford’s mayor, Bob Blackstone, has long promised to lay down brick pavers but has nothing to show after 10 years in office. Sunny Fields, Amy’s best friend and coworker, is running for mayor, and Amy vows she’ll do more to aid Sunny’s campaign.

Amy is engaged to dancer and choreographer Richard, who admires Amy’s penchant for solving local mysteries. As her fiancé (and next-door neighbor), however, he worries about her—even if her most pressing problem lately is well-wishers descending on her at the library.

There are two times in a woman’s life when complete strangers think it’s appropriate to offer unsolicited advice—when she’s obviously pregnant, and when they discover she’s planning a wedding.

She’s happy to be rescued by wealthy local artist Kurt Kendrick, an “art dealer and collector” who asks Amy “for something on Caravaggio.” It’s a ruse; Kurt is looking for Sunshine (Sunny) Fields so he can contribute to her campaign. Amy says Sunny’s helping Carol and P.J. Fields, her grandparents. Does Kurt know them?

Kurt looked away, although not before I noticed his lashes lower to shadow his bright-blue eyes. “Of course, although we’re not personally acquainted. But I’m aware that they run an organic farm outside of town. My chef often buys fresh fruits and vegetables from them. The farm has a picturesque name, as I recall.”

“Vista View. It’s been in P.J.’s family for generations and, unlike most land around here, has been continually farmed.”

When a character looks away during an innocuous conversation, take note. Vista View hasn’t always been an organic farm; back in the 1960s, “Sunny’s grandparents ran a commune” there. So what? Lots of respectable citizens were part of the counter-culture back in the day. Think of Forrest Gump. But distressingly, county bulldozers—engaged to clean up the farm’s creek and adjacent watershed—discover a skeleton at Vista View. Bad news for the Fields family and their granddaughter’s mayoral campaign.

But these former hippies face criminal charges when human remains are found in their fields—and a forensic examination reveals that the death was neither natural nor accidental.

Sunny needs Amy’s research skills to figure out who died and whodunit. Is there a benign explanation? Maybe Vista View “was once the site of a Native American settlement, or part of some long-abandoned homestead.” Also, Amy is glad to put her wedding plans temporarily on hold because Richard’s conservative mother, who knows just how her son’s wedding should unfold, is driving her a little crazy.

Amy reviews the missing-persons cases over the years. Could it be the body of budding musician and hippy Jeremy Adams, reputed to have “left for LA” decades ago and never heard from again? As Amy sifts through old photographs, wearing white cotton archival gloves, she thinks about the task ahead.

Sure, it would be like sifting through all the sand on a beach to find a tiny diamond. But that was often the case with research—hours, days, or even months invested in digging through information just to discover one essential gem.

After the police identify Jeremy Adams as the dead body, Amy wonders what precipitated his murder. She leaves the archives to track down former residents of the commune, like Ruth Lee. Ruth is the proprietor of a “consignment and antique shop.” Its dark interior is jammed with “display cases” that “boasted glass so cloudy it was impossible to tell what was inside.” Amy tells the elderly, grey-haired owner that she has a message from the Fields. Ruth had once lived on the commune, but she averts her face from Amy’s “inquisitive gaze,” while telling her she has nothing to hide.

“It’s just that Carol and P.J. thought you should be warned about the authorities looking into the matter. They wanted to give you a heads-up.” I circled around the display case to stand beside her.

Ruth is unimpressed that the Fields are worried on her behalf. “Yes, yes. The ultimate do-gooders, bless their hearts.” Even Northerners know that’s a putdown, but the Fields are right to be concerned. Ruth Lee is murdered—someone is coming after the former hippies. Could it possibly have been a drug deal gone wrong?

Victoria Gilbert unfolds the tale skillfully, sprinkling the plot with red herrings and misleading pathways. It’s not obvious why Jeremy Adam’s unfortunate death has stirred such an unholy hornet’s nest decades later. Amy is told many a contradictory tale.

After dealing with a few other criminals, I had learned not to trust everything people told me, no matter how innocent they might appear on the surface.

Her fiancé hopes Amy doesn’t provoke “a possible murderer” into violence as she unravels the mystery of Jeremy’s long-ago death. Bound for Murder is a clever cozy with some spikey edges. What’s next for our intrepid librarian?