October 29, 2019
Bomber's Moon is the 30th book in Archer Mayor's Joe Gunther series about a murder of a small-time drug dealer which snowballs into a complex case for VBI. 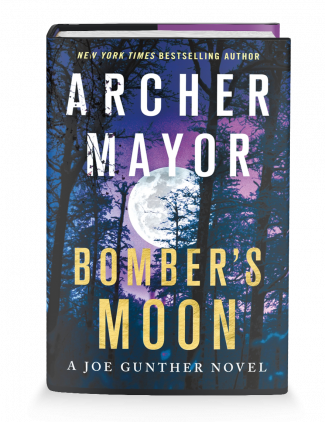 There is no clear definition of the term ‘bomber’s moon.’ It was the title of a WWII propaganda film in 1943 and later as the title of a teleplay that the late, great Rod Serling wrote for Playhouse 90 in 1958. For the purpose of the latest Joe Gunther novel from Archer Mayor, it infers that folks use the term to describe a bright, clear moon that is helpful while you are hunting for something or someone.

Living / Writing in a World of Crime, an essay by Archer Mayor

Whatever meaning you choose to assign to this novel is the reader’s choice. I look at this as a privilege to be enjoying the thirtieth novel in one of the longest-running and most satisfying crime/thriller series on the market. Bomber’s Moon brings us once again to the Green Mountains of Vermont where it is cold most of the year and near-arctic conditions for the core winter months. It is in this landscape where Joe Gunther and his team from the VBI (Vermont Bureau of Investigation) operate.

Bomber’s Moon is strongly influenced by small-time but very clever crooks. One of them is Dan Kravitz, who passed his unique skill-set down to his daughter, Sally. Fortunately for her, being on the wrong side of the law and constantly on the run did not sound like a promising future. She turned her skills into a new career as a Private Investigator. At barely thirty-years-old, Sally may have finally hit on a case that will surpass the usual tailing of unfaithful spouse jobs she typically gets.

The person Sally is tailing goes by many names. His current moniker is Alex B. Robbin, which was a nice play on words to describe his profession. The given name he was born with is Alex Robin Hale. He has a very unique style for his break-ins and small-time heists. In fact, he has gotten so good at it that he has gained the attention of Joe Gunther and his team as well. Bomber’s Moon fills out more as a triangle of players that are in on the ‘Robbin’ case. Young investigative reporter, Rachel Reiling, is looking to make a name for herself. She finds herself pointed in the direction of Sally Kravitz and gets her to reluctantly share information about their current burglar obsession. Rachel is also the step-daughter of Joe Gunther. However, what begins as mere breaking and entering and other lesser crimes quickly ramps up when drugs and narcotic distributing rears its ugly head.

Mayor’s novel has two different ‘trifecta’ elements. The first is the afore-mentioned crime spree that Joe Gunther, Sally Kravitz, and Rachel Reiling and the second is the connection of several crimes to Mr. Robbin; the murder of a small-time drug dealer, and, a series of high-level shenanigans taking place at prestigious prep school called Thorndike. What starts out innocently enough quickly takes a sharp, dark turn as these situations all converge to open the door on a deadly conspiracy that will threaten all of their lives and potentially end the long career of the great Joe Gunther. Archer Mayor has never let up for a second with this extremely readable series and Bomber’s Moon will appeal to his long-time fans as well as any newcomers.

For Further Investigation, check out Mystery Bookclubs: Hands-on, Gloves Off