December 15, 2020
Perfect town. Perfect homes. Perfect families. It’s enough to drive some women mad... Read on for Doreen Sheridan's review of Bloodline by Jess Lourey in which pregnant journalist Joan Harken joins her fiancé to return to relocate to the small Minnesota town where he's from, but Joan can't shake the feeling that something sinister is lurking beneath the friendly facade... 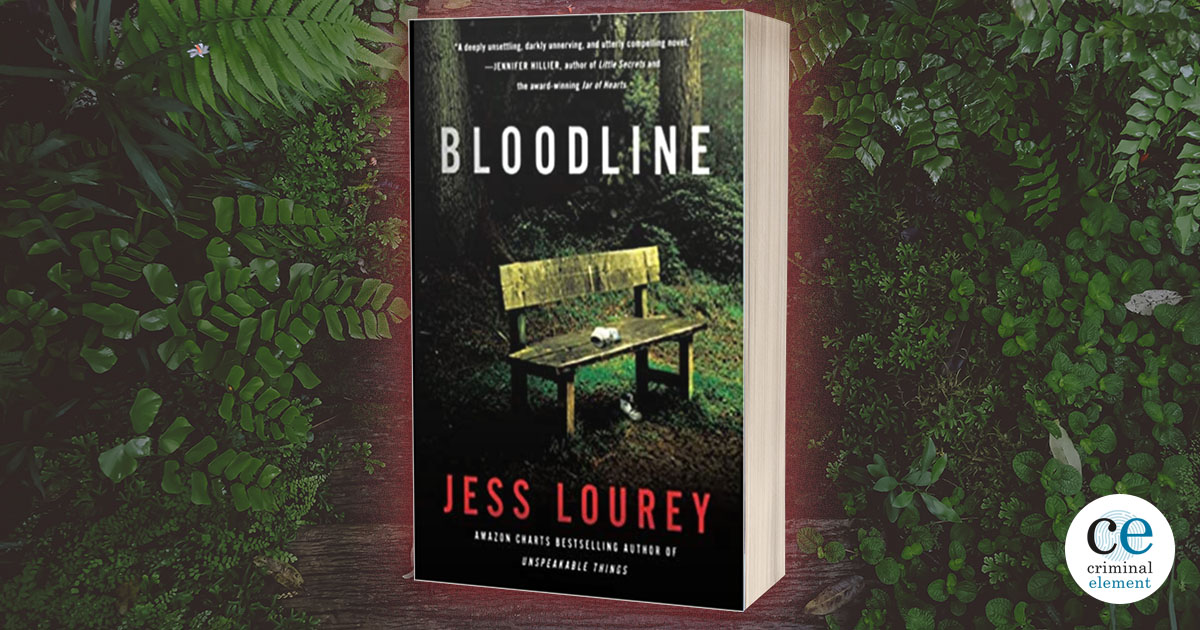 1968 was a tumultuous year for America, and especially so for Joan Harken, aspiring reporter. Living in the city of Minneapolis, she believed herself to be the epitome of the liberated young woman, after a peripatetic youth with her fiercely loving if secretive and now-deceased mother. She certainly didn’t expect to fall in love with handsome, square-seeming Deck Schmidt, or to become pregnant less than a year after meeting him. After a violent mugging comes on the heels of a lost, longed-for promotion at work, Joan is willing to listen when Deck suggests moving their growing little family back to Lilydale, his hometown. His father is Lilydale’s mayor, and his political influence could help Deck evade the Vietnam draft. Deck also promises that the local paper will be thrilled not only to hire her but to give her a reporter’s byline too. Tired of city life and the unceasing tumult of national news, Joan agrees, despite her best friend warning her against becoming a small-town baby-making machine.

Joan doesn’t immediately fall in love with her new home, which reminds her a bit of a feudal state. Royalty lives on Mill Street where, unsurprisingly, a house has been furnished for her and the prodigal son, while commoners populate the rest of the village. As she gets more comfortable and begins to redecorate, however, the pleasures of domesticity lull her into contentment. She’s in for a rude awakening when she learns that not only has Deck been telling everyone that she’s pregnant but that they’re also married, which they’re definitely not, in order to better fit in with their neighbors:

I suddenly feel queasy, a lotus-eater who should have been doing real work. Deck has allowed me a subscription to two newspapers—the Minneapolis Star and the New York Times—so I can stay abreast of world affairs, but I’ve been so busy painting and cleaning and building my nest that I’ve hardly opened them except to spread on the floor and catch the paint drips.

If I’m honest, it’s not just that I’ve been busy remodeling. Lilydale is so soothing, so apart from the world. Race riots. War. Strikes. It’s somehow rude to invite all the ugliness here by reading my newspapers. The slow pace has even lulled me into letting Deck control my career rather than simply taking care of it myself.

Determined to regain her sense of autonomy, Joan gets herself hired with the Lilydale Gazette and begins to scout around town for stories. Crime barely seems to be a factor in this picture-perfect village, with about the most exciting, and worst, thing to have ever happened here being the disappearance of little Paulie Aandeg from kindergarten some decades before. But the more people she talks to, the more a growing sense of unease grips her. Is something deeply wrong simmering just under the surface of Lilydale, or is it all in Joan’s head?

As the novel progresses, we’re privy to Joan’s unraveling in the face of an acute psychological horror fueled by the conservative mores of her time and location. Things were vastly different for women, for better but for mostly worse, fifty-odd years ago, and Joan has to constantly make herself smaller and more pliable in order to survive. Upon becoming convinced that the residents of Mill Street are after the baby she carries, she makes increasingly elaborate plans to preserve her independence and freedom, even as she begins to lose touch with reality, culminating in a nightmarish child-birthing:

The faces, watching greedily as my baby came out, staring between my bloody legs as if I were a prize horse delivering their foal. I’d been drugged—a shot? two?—but the pain drew me out until the shot pulled me under, back and forth, drew me out, pulled me under, and whose faces were they? I see only grinning mouths.

But it doesn’t matter.

I am Joan Harken. I am a reporter. My baby is gone.

Joan’s desperate adherence to her core beliefs is the only thing that will save her as she fights to escape the nightmare that her life has become. Despite my own concerns as to her sanity, I was deeply invested in her health and happiness, and found the ending to be wholly satisfying. Jess Lourey’s latest novel feels like an exceptionally timely allegory for Americans and especially, but not exclusively, for white women like herself, a reminder to resist the desire to turn away from the real challenges of modern life in favor of a dream of an America that never was. That false idea of perfection and safety, born of insularity and a strict adherence to conformity, can only crush the individuals within it, even as it struggles to keep itself aloft on the backs of the spirits it has destroyed.

Bloodline works as both social commentary and as a cracking psychological thriller, combining bits of The Stepford Wives with Rosemary’s Baby, as well as other literary influences it gives clear, clever nods to in the text. Inspired by a true story, it’s a creepy page-turner that has me eager to read more of Ms. Lourey’s works, especially if they’re all as incisive as this thought-provoking novel.