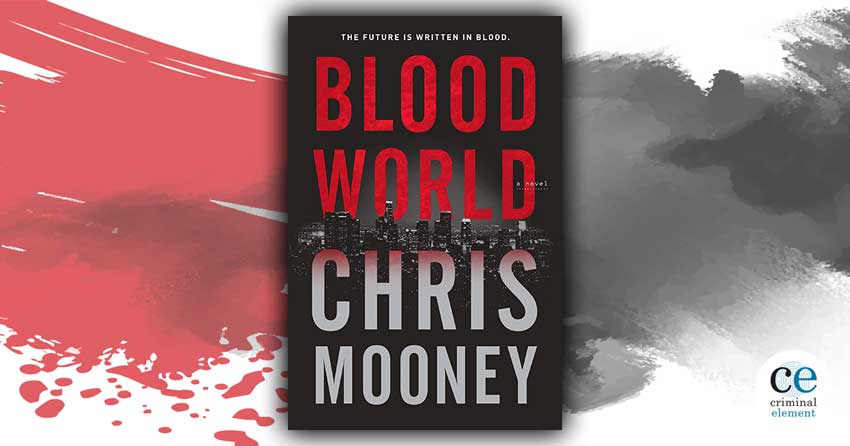 Blood World by Chris Mooney is a well-balanced thriller exploring the morality of both sides of the law as LAPD Officer Ellie Batista goes undercover with the Blood Squad to stop a criminal enterprise attempting to farm special blood from innocent civilians.

Chris Mooney is the international bestselling author of 12 novels that have sold nearly 2 million copies and been translated into more than 20 languages. These include both the Malcolm Fletcher and Darby McCormick series; The Missing (Darby McCormick #1) was a main selection of the International Book of the Month Club and an instant bestseller in more than 13 countries, while Remembering Sarah (Malcolm Fletcher #4) was nominated for an Edgar Award for Best Novel. Mooney lives in Boston and occasionally teaches writing courses at the Harvard Extension School.

The author’s latest, August’s Blood World, charts new (and slightly speculative) territory. As the story opens, unsuspecting LAPD officer Ellie Batista and her partner, Danny, are drawn to a Brentwood home after encountering a dog bearing a tag with a cryptic message written in blood: “Help Us.” Upon arrival, an UNSUB unleashes a burst of gunfire that leaves Danny, the homeowner, and other house occupants dead. Though dazed and distraught, Ellie—who knows she can’t show outward signs of vulnerability—recognizes two of the victims as missing persons; they are thought to have been targeted for being “carriers” of a particular gene that causes blood, when mixed with certain drugs, to have healing and transformative powers.

Consequently, Ellie is able to leverage her knowledge for reassignment to the elite Blood Squad—the unit that investigates crimes against carriers (targeted for access to their blood, which is in high demand). This is not simply an act of opportunism but one of necessity; her brother, Jonathan (J.C.) Cullen—a carrier—was abducted many years ago, and she’s made it her life’s mission to either find him alive or discover the truth about what became of him. So when the opportunity presents itself to gain access to everything at the Blood Squad’s disposal, albeit under fraudulent circumstances (Ellie Batista is not her birth-given name), she does not hesitate—despite the dangers of going undercover to infiltrate the underground business of “blood farms” and the fact that it means pressing pause on her nerve-rackingly idyllic romantic relationship.

Meanwhile, ex-con and current blood runner Sebastian Kane finds himself embroiled in a deadly competition with his deceased wife’s son, Paul—a former combat vet who wants to dominate the blood business himself rather than being Sebastian’s lackey. An extended kill-or-be-killed struggle ensues with much collateral damage as their mutual quest for vengeance supersedes rational thought and action. And, inevitably, Ellie—now known as Faye—finds herself in the unenviable position of middle(wo)man, which means that her survival depends on reconciling the murkier aspects of the job with her own motives and conscience.

The narrative alternates between Ellie’s and Sebastian’s perspectives (and histories). This not only heightens the tension, (as each tries to understand/not underestimate the other) but highlights the many moral gray areas that exist within their headspace; indeed, both characters are highly motivated by very human desires—despite some very inhumane activities—while representing opposite sides of the law. Further, intense action sequences offset the emotional undertones, resulting in a well-balanced thriller that’s both thought-provoking and viscerally entertaining.

Blood World is the quintessential page-turner. Provocative and propulsive, it presents a world not all that different from our own and then asks big questions without preaching convenient-if-convoluted answers. While Chris Mooney may not have the instant name recognition of heavy hitters like Connelly or Slaughter (yet), his storytelling capabilities are on par with theirs—and this book is both the proof and the perfect entry point into his work.