November 11, 2019
In Blind Search by Paula Munier—the sequel to the critically acclaimed A Borrowing of Bones—Mercy Carr and her retired bomb-sniffing dog Elvis are back. 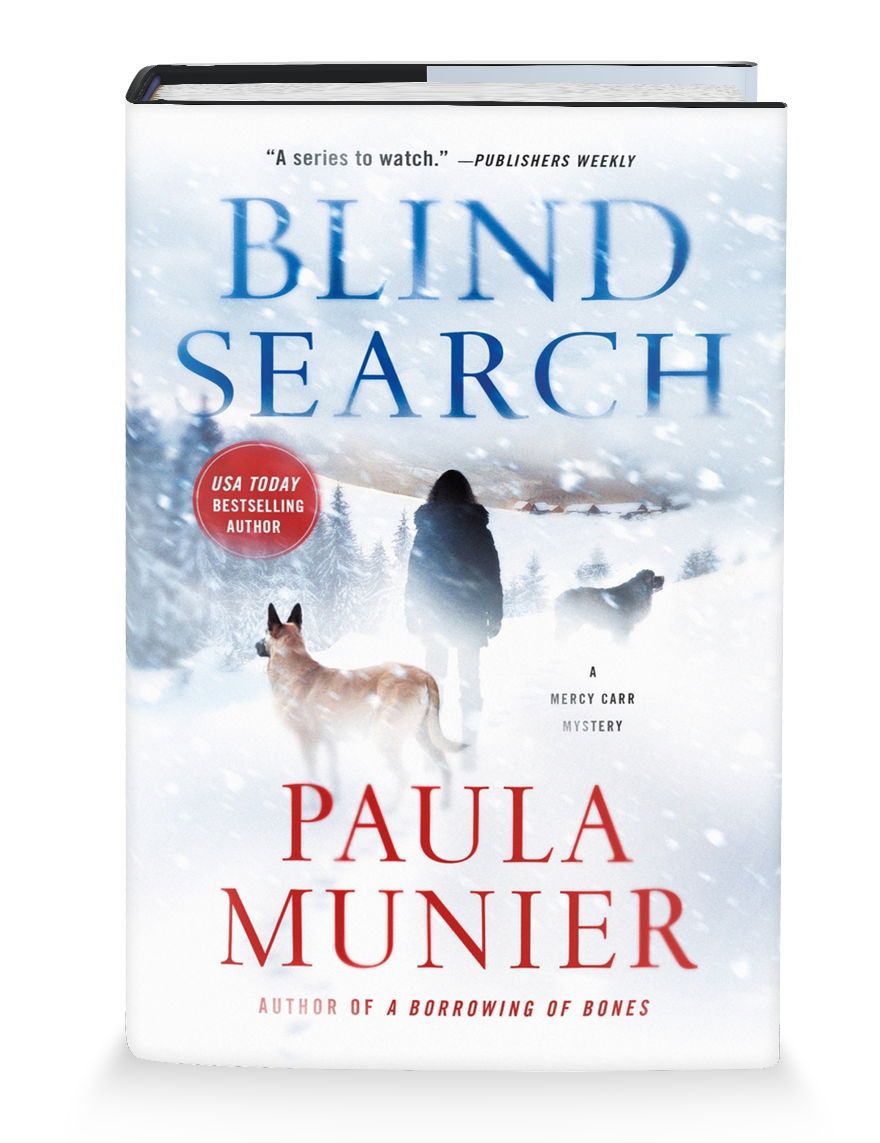 Paula Munier is a triple threat. In addition to serving as agent extraordinaire for a cadre of esteemed authors, she’s written five popular non-fiction titles, including three on the craft of writing—Plot Perfect, The Writer’s Guide to Beginnings, and Writing with Quiet Hands. Last year, she entered the realm of crime fiction with A Borrowing of Bones; that title—which was both a USA Today bestseller and a nominee for the prestigious Mary Higgins Clark Award—launched a new series featuring former military police officer Mercy Karr and her bomb-sniffing dog, Elvis. Their saga continues with November’s Blind Search.

Read More: Review of A Borrowing of Bones

As the story opens, Mercy and Elvis—still adjusting to civilian life, and the absence of the man who brought them together—are drawn into the Great Mountains of Vermont, where the start of hunting season offers both promise and peril. The discovery of a body, shot dead through the heart with an arrow, indicates that something sinister is afoot—and the subsequent recovery of a missing nine-year-old boy, Henry, suggests connection rather than coincidence. Mercy fears for his safety, given her suspicion that he may have witnessed the murder, but Henry’s limited speech poses a challenge to his ability to communicate what, if anything, he saw.

Meanwhile, local game warden Troy Warner and his search-and-rescue dog, Susie Bear, are also on scene—and they’re up against a foe far greater than the usual poachers or night hunters. Sniffing out a killer before he/she can strike again is a treacherous task, and one that depends largely on Henry. Despite the boy’s reticence around people—including his father, who was dating the victim, and the remainder of their quasi-intimate hunting party—he quickly forms a trusting relationship with Elvis and Susie Bear, which Mercy and Troy hope to use to their advantage in unlocking his memories. But a second murder coupled with the impending arrival of two intense storm systems means time may be running out.

The novel was inspired by a real-life case in which an autistic child got lost in the Vermont woods, and Munier does an admirable job of portraying such a plight with sensitivity; indeed, she showcases Henry’s extraordinary abilities (mathematical prowess and photographic recall among them) rather than focusing solely on the things that make him vulnerable, though the latter certainly enhance the story’s overall sense of urgency. The ongoing flirtation between Mercy and Troy, and the ill-timed reemergence of Troy’s estranged wife, add an element of romantic suspense that further complicates their halting relationship. And then there’s the picturesque New England setting, as seductive as it is savage, its seeming splendor belying the harsh realities of hunting season.

Blind Search is on target with the promise set forth with A Borrowing of Bones. While the story should stand alone adequately for new readers, the progression of characters (both human and canine) and circumstance will appeal to loyalists who’ve been anxiously awaiting a follow-up. Bottom line: If Paula Munier isn’t yet on your “must-read” list, she should be.