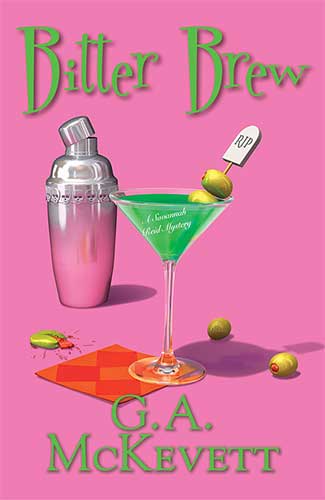 Bitter Brew by G.A. McKevett is the 24th cozy mystery in the P.I. Savannah Reid series where Savanna must drop everything from her full plate for a friend in trouble.

On a dark and stormy night, Savannah is surprised to find the enigmatic Dr. Jennifer Liu, the county coroner, on her doorstep. Once in out of the rain, Dr. Liu admits to having committed a potentially career-ending transgression: falsifying an autopsy report to cover up a friend’s cause of death. Said friend, Brianne, was suffering from (the fictitious) Halstead’s Disease when she decided to take her own life. Or did she? A second body has turned up at the morgue, testing positive for the very same lethal cocktail that killed Brianne—and now Dr. Liu suspects that both were the victims of a cunning killer. But investigating this apparent crime means exposing her misdeed and jeopardizing everything she’s worked for.

Still, a killer must be brought to justice, and Dr. Liu asks Savannah to discreetly look into the matter. Always the loyal friend, Savannah agrees—and eventually brings in other members of the Moonlight Magnolia Detective Agency (comprised of family and friends, all of whom have abilities that augment her own). This inquisition allows the author to sensitively explore what it means to live with, and to die from, illnesses that attack both body and mind; while her character’s afflictions are imaginary, they’re based on the very real ravages of dementia. The second point of consideration is end-of-life choice-making, and who has the right to determine one’s ultimate fate, whether it be their own or somebody else’s.

Beyond sleuthing, Savannah has some personal problems that demand a reckoning. As she and her husband, Dirk, celebrate their one-year marriage anniversary it becomes increasingly apparent that the honeymoon is indeed over. While Dirk has never been particularly romantic, or imaginative when it comes to gift-giving, Savannah can tell that his attention is elsewhere—but are his affections? Inexplicable absences and secretive phone calls lead her to worry that he may have broken their wedding vows. The recent discovery that she can’t have children compounds her concerns; it’s a devastating reality (given Dirk’s love of babies and her unexpected desire to give him one), and one that exposes a rare vulnerability in her otherwise impenetrable defenses.

McKevett balances these storylines skillfully, providing readers an intimate look into the personal and professional lives of her characters. As always, Savannah’s exploits invite involvement from other members of the Reid family (she has eight siblings); consequently, the traditional wit and wisdom of the South is in full effect. But there’s an underlying depth that offsets these more lighthearted moments, which is a testament to the author’s willingness to take calculated risks. In addition to keeping her venerable series fresh-yet-familiar by bringing fringe characters to the forefront, she continues to infuse serious, thought-provoking subtext that brings some edge to the overall coziness.

Bitter Brew serves up a buzzworthy blend of well-percolated prose. Readers old and new alike will find themselves jonesing for more. Fortunately, G.A. McKevett seems to have a bottomless supply of beans…