May 27, 2022
Betraying the Crown is TP Fielden's third Guy Harford mystery in which Harford must catch a killer and save the monarchy from crisis in wartime. 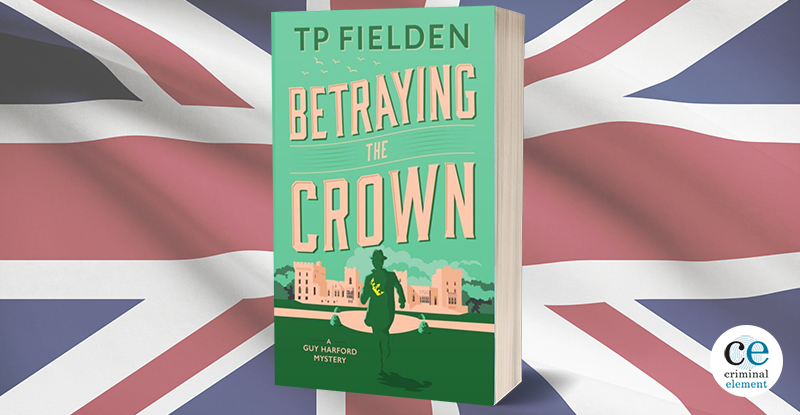 The House of Windsor is the gift that keeps on giving. Every year historians, novelists, royal reporters, and journalists revisit the 1936 Abdication of King Edward VIII and the ripple effect caused by that seismic event. Has much changed since then? Look at the tagline of Betraying the Crown: “Intrigue and scandal threaten to rock the monarchy in wartime Britain.” Substitute present-day for wartime—some might see modern-day similarities.

Betraying the Crown is the third Guy Harford mystery. Guy is a multi-faceted fellow—an “artist, palace courtier, reluctant spy.” Although he has a storied pedigree, he views himself as an artist and resident of Tangiers. The palace uses Guy’s artistic career as a point of entry, a foot in the door, when it’s desirable to interview an elusive, uber-wealthy aristocrat. Women are flattered when a popular artist evinces an interest in painting them.

Guy and his burglar girlfriend Rodie are larking about one day at Windsor Great Park, seeing where the day takes them.

The Austin trundled up the hill and turned a corner to be confronted by an odd-looking castellated building, its tall tower pinkly blushing in the late afternoon sunlight. But though chirpy in appearance, Fort Belvedere seemed deflated in spirit as they approached.

‘Nobody about,’ said Rodie, looking round. ‘Quiet as the grave.’

‘That’s because it’s out of bounds. We’re not supposed to be up here.’

When Guy points out that the front door is locked, it’s tantamount to waving a red flag at a bull. Rodie won’t balk at a locked door, particularly since she’s now working for a secretive government department. Think of her as a government-sanctioned investigator/burglar. Like Guy, she works for his Majesty’s government, just a different branch. Even though Rodie is working on the respectable side of the street, some of Guy’s more snooty friends consider his relationship with Rodie rather infra dig. Fort Belvedere is not entirely deserted—the pair discover a dead man, no ordinary corpse. How did “controversial former courtier Lord Blackwater” die? Was it an unnatural death? Unsurprisingly, the men in grey suits would rather his death be described as natural, perhaps a heart attack? Lord Blackwater is a fictional figure but he accurately represents the men and women who were close to King Edward VIII (later the Duke of Windsor). After the Abdication, those courtiers were frozen out, both by King George VI and the Duke of Windsor.

If a former member of the Duke’s court is dead, could there be a connection to the Duke himself? Guy is tasked with uncovering what David (his family nickname) has been up to. Likely nothing good. Traitor King by Andrew Lownie touches on many alarming historical details. After his exile, the Duke of Windsor wrote a biography that was critical of his family. The Duke flirted—more than flirted really—with Nazism. The Duke was bitter about how his duchess was treated, bemoaning the fact that she wasn’t granted the honorific Her Royal Highness.

It doesn’t require the aloof but intensely loyal senior courtier Tommy Lascelles (who we met in The Crown) to tell Guy that the last thing anyone needs, as war rages, is a royal scandal. Are the folks maligning the Governor General of the Bahamas fair-minded or do they have an axe of their own to grind? Joe, an eccentric and wealthy woman living on an island near the Bahamas, says not only is the Duke laundering money, but he’s also rumored to be interested in becoming an American citizen. Guy thanks her for her help but he presses her hard on the accuracy of her information.

‘Listen, old chum,’ she said, ‘I’m half-English and half-American so I can see things from both sides—how wonderful your royal family is, and how outdated it all seems. Perhaps that’s part of its charm. So I want the royals to succeed, but I look down on royals who aren’t up to scratch. Windsor is one of those and anything I can do to help, I will.’

‘Then help me find out to what extent he truly is a traitor,’ said Guy sharply, ‘wittingly or unwittingly.’

Like Guy, author Fielden is balanced in his description of the Windsor’s sojourn in the Bahamas. Readers benefit from his intensive research: he uncovers stories that have been kept under wraps for decades.

Why is it up to Guy to “catch the killer and save the monarchy from crisis in wartime?” He’s an artist, not a courtier, or is that a fig leaf? In his own way, Guy’s as loyal to the royals as his masters at Buckingham Palace.

Let me leave you with a delightful amuse-bouche. Meet Ronald Morgan, a retired valet with infallible sources of information and a nose for champagne. Ronald lives at St. James’s, near Buckingham Palace, in a grace and favor “palazzo,” rather grand in Guy’s estimation.

‘Hello, Mr Morgan,’ said Guy, shielding his irritation. ‘His Majesty asked me to bring you this.’

Guy handed him the bottle of Pol Roger ’32, peeling back the linen napkin which had kept it cool on its short journey from Buckingham Palace.

‘I’m more used to getting the ’27,’ grumbled the old man. ‘His Majesty knows I hate young wine.’

Guy is unhappy to be pressed into service listening to the reminiscences of a haughty retired servant but noblesse oblige, until the old man, who asks to be called Ronnie, veers into well-informed gossip. When Guy says he’s “seeing rather a lot of Osbert Lothian,” the floodgates open.

‘Man’s an idiot,’ wheezed Ronnie. ‘I remember him back in the old king’s day, used to walk about with a poker up his arse and a stink under his nose.’

And just like that, “they drank and smiled, having quickly discovered each other’s wavelength.” When dealing with royals, whether it be writing about them or working for them, a keen memory and a sense of the unspoken pecking order are invaluable assets. Assets that Guy taps when he needs to separate fact from fiction and reality from rumor, as his investigation into the Duke of Windsor unfolds.

N.B. TP Fielden is the pseudonym of “acclaimed royal biographer and commentator,” Christopher Wilson, a longtime royal journalist and someone who knows where the royal stories are buried.