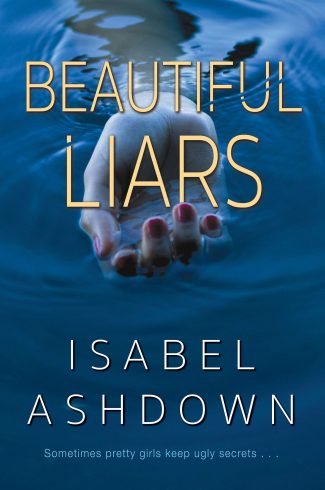 Beautiful Liars by Isabel Ashdown tells the story of Martha, a TV celebrity preparing to host a show investigating cold cases where she may finally have a chance to get answers about her missing childhood friend.

Martha Benn, celebrity TV host, and her friend Liv Heathcote have lived with the mysterious disappearance of their friend Juliet for almost two decades. Now Martha is putting together the pilot for a new true crime documentary show. She is determined to feature her best friend’s disappearance in hopes of finally finding out what happened at the canal all those years ago.

But the past wants to remain buried. As she digs into her own past, she finds that things were not always what she thought. Perhaps she wasn’t the last person to see Juliet alive. Perhaps the bonds of friendship weren’t all she supposed them to be. Perhaps there’s someone out there who is more than what they seem to be.

Beautiful Liars, by Isabel Ashdown, is a beautiful creepy-creep fest of a novel. Told in alternating point-of-view chapters, Martha and a mysterious woman named Casey, the story of Juliet’s disappearance unfolds piece by enigmatic piece.  Martha certainly has her hands full trying to decipher all of the clues and, page by page, the reader goes along for the sinister ride.

As if researching a decades-old cold case wasn’t difficult enough, Martha’s journey of discovery is complicated by Casey, a well-meaning but offbeat “helper.” Casey is a heartbreaking, painful character to read. She’s a recluse, a copyeditor who remains hidden in her London house. You get the sense pretty quickly that the outside world is a nightmare for her.

Then the outside world comes right to her door. Martha sends a letter to Casey’s home address, thinking that it’s still the home of Liv. But Casey bought the house from Liv a while ago. Instead of returning the letter to the sender or forwarding it to Liv, the lonely Casey opens it up. (Like everyone else in London, she knows who Martha Benn is.)

The letter is a plea to Liv to help Martha out with the TV pilot. Touched by the request, and in awe that humans can have such close friends, Casey determines that she will be a friend and “help” Martha in her investigations.

As a reader, my initial reaction to this decision was: “Oh, honey, no. Don’t do that.”

(I think I may have said that out loud to the page.)

Martha Benn—the Martha Benn—thinks that I am Olivia Heathcote. She thinks she is writing to Liv Heathcote, and she wants her help in an unsolved case. It’s a case I recall only too well; it disturbed my mother terribly, the idea of that poor girl vanishing so close to where we lived, and for several weeks afterward she insisted I wasn’t allowed out alone, even in daylight hours. It made the national news for a while, until the police concluded that she had eloped with an older man. But I didn’t believe that for a minute—and I’m guessing that Martha doesn’t believe it either. I push back my chair and stand shakily, the names swimming across my mind like new friends: Martha, Liv, Juliet, David Crown. I must lie down; it’s all rather too much, and for the first time in an age I almost wish my mother were here to share in this excitement. I ease myself into the sagging sofa—my, how it sags—and position my neck against one armrest, catching a waft of body odor as I lug my legs up and over the other. Does it sound dreadful to confess I can’t remember the last time I took a bath? The shower hose is broke, but that’s no excuse, as I’ve always preferred a bath anyway. If I’m to meet up with Martha Benn—and it’s quite possible this really could happen—I need to buck up my ideas. I’ll run a bath this afternoon, after I’ve had a little rest.

Martha, not knowing that Casey is providing “assistance” from the sidelines—nosing around missing persons boards and setting up false email accounts—moves forward with her investigation, struggling to come up with any new information. But every interview brings her back around to David Crown, who was the initial suspect and who disappeared at about the same time as Juliet—leading everyone to think the charity-running older man and his teenage volunteer ran away together. It’s a storyline Martha has never bought into.

The coincidences, however, keep popping up: Rumors that he assaulted a student years ago. The death of a high school acquaintance. Juliet’s disappearance. For Martha, it’s getting harder and harder to ignore the conspiracy theories.

She reaches out to an old family friend, a police officer named Finn Palin, hoping to find new evidence… but it seems to be more of the same.

“It’s a long time since I had anything to do with the case, and you know I was never directly involved. You say he’s never been heard of since? No bank account activity, no passport renewals, traffic offenses and so on?” Finn bites into his pastry, moving his jaw thoughtfully. “Obviously we can’t rule out the possibility that he’s dead.”

“Yes, but people change their identities all the time, don’t they? I mean, how hard would it have been for him to set up a life elsewhere with a new name and backstory? Especially with fifty grand in his back pocket?”

“Not that hard,” Finn agrees. “I double-checked the file notes for you, and that was a strong theory when the investigation was closed – when it was decided that Juliet might have left willingly with David Crown.”

“I can’t believe they’d write off a seventeen-year-old girl so easily. None of us, not a single one of her friends or family, had previously suspected that Juliet was having a relationship with David. So why did the police jump to the conclusion so quickly?”

“There was an anonymous tip-off,” Finn says. “A phone call. My guy’s only just spotted it in the files – for some reason it had become separated from the case notes.”

The best lies have a bit of truth in them. As Martha digs deeper and deeper, it becomes more difficult to sort the fact from the fiction. She is confronted with monumental lies, white lies, and convoluted lies. The truth lies buried underneath all the falsehoods. And Martha needs to find the truth quickly. Her questions have stirred a sleeping killer to life once again.

Beautiful Liars is a gorgeously written story of secrets and how far we’ll go to keep them. Isabel Ashdown has weaved a web of deceit and misdirection that will make readers grateful for their true friends.