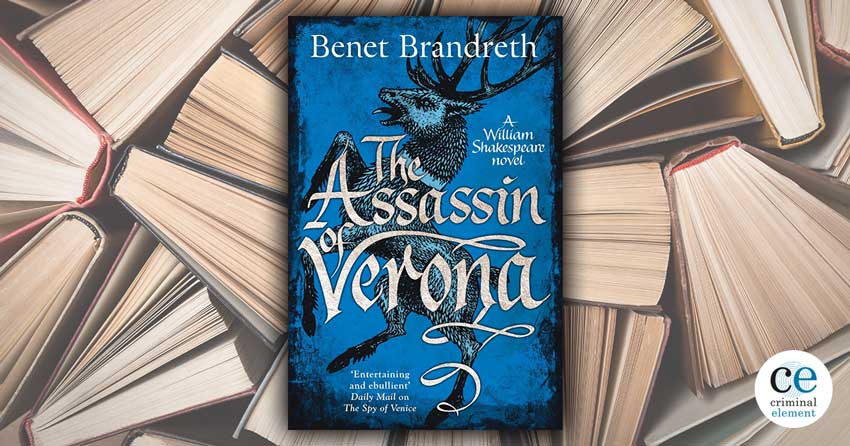 The Assassination of Verona by Benet Brandreth is the second in the William Shakespeare Thriller series, full of conspiracy, intrigue and rapier-sharp wit.

Instead of a traditional whodunit, The Assassin of Verona is more of an espionage thriller set in 1586 in Italy. This novel proposes to answer the mystery of Shakespeare’s doings in Italy from 1585 to 1586.

Will Shakespeare, Nicholas Oldcastle, and John Hemmings are in disguise. They have been charged with bringing the names of the Pope’s Catholic spies to England. But instead of completing this task, they are enjoying themselves. Will has fallen in love with a beautiful courtesan, Isabella, and refuses to leave.

At the same time, the Duke of Verona’s daughter, Aemilia, is struggling to conceal her romance with her cousin Valentine.

Valentine came and sat beside her on the stone bench. She looked at the pure pleasure on his face at her praise and returned the look with pleasure of her own. His words were as beautiful as he. She had feared that she was to spend her whole life in her father’s palace surrounded only by the old, the martial, and the stern, with their dry talk of livestock, politics, or the disciplines of war.

Into these happy times come the Pope’s emissary, Father Thornhill, a cold and cruel man determined to find the English spies and bend Verona’s Duke to his will.

The statue stepped from the transept into the light around the altar and a gaunt face appeared, high cheekbones, pale eyes and a wolfish look of judgement and dislike. She (Aemilia) did not know him. She wanted to ask who he thought he was to bark questions at her but the courage to speak escaped her. His pale eyes were daggers that pinned her in her place.

As in most of Shakespeare’s comedies, the protagonists all end up in the woods with a band of outlaws, headed by a nobleman on the run from a corrupt brother.

Many of the elements of Shakespeare’s plays are in evidence. The young lovers (Aemilia, in disguise as a boy, and Valentine), Falstaff (Nicholas Oldcastle), the outlaw who is a nobleman in disguise (Orlando), and more.

There are more obvious ties to the plays as well—lines quoted and even the titles used as dialog.

‘I call it Tanto Traffico per niente,’ she answered. ‘Much ado about nothing.’

But my favorite part is the style. It is written as though it is one of Shakespeare’s plays in prose.

‘Your poem,’ said Aemilia, ‘speaks to me of your great soul.’

‘It speaks of yours, Aemilia, for you are its inspiration.’

‘I think a little of the inspiration lies with Catullus,’ she answered.

‘You sport with me,’ answered Valentine, hurt look still perched upon him like a bruise on an apple.