Book Review: Arrowood and the Thames Corpses by Mick Finlay

June 25, 2020
In the third installment of the Arrowood series, William Arrowood and his trusty sidekick Norman Barnett become involved in a sinister investigation when a string of skulls is retrieved from the Thames River. 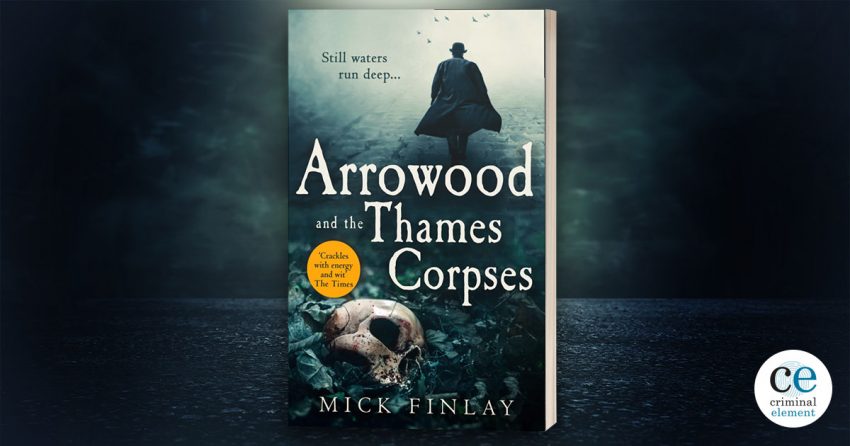 It all seems so straightforward at the beginning: Captain Moon and his teenage daughter Suzie come to William Arrowood, private inquiry agent, and his partner Norman Barnett because someone has been vandalizing their riverboat. The Gravesend Queen is the Moons’ source of income, used to ferry day-trippers down the Thames, and the pair can’t afford to lose any more custom from damages, not with creditors sniffing at the door.

Suzie is sure the culprit is a competitor, Captain Polgreen, who wants to steal the Moons’ route. But Arrowood and Barnett both sense that Captain Moon isn’t as convinced…

Then the attacks on the Queen escalate, forcing the inquiry agents to maintain nightly watches onboard. But the night Barnett is forced to hold a solitary watch, things become even more dire:

The rope was slick, covered all over with a stinking, tarry mud. I pulled it hand over hand until something burst out the water. It was a brownish, yellowish thing like a big egg, the rope tied through a hole in the shell.

‘What the hell is that?’ asked Ken.

I kept pulling. Then, as the thing rose up the boat, another one appeared in the brown water, tied a few feet further down the rope. As it broke the surface, it rolled on its side.

I stopped pulling and stared.

It was a skull. The eye holes were plugged with black mud, the teeth little and bright. The rope ran through where the nose should be. Only now could we see that the first one was also a skull.

Suzie stepped back, her hand covering her mouth. It was a child. I placed it on the deck and drew up more of the rope, feeling a cold fury fill me as skull after skull came up from the water…

Tied to the boat is a rope threaded with fourteen skulls. The skulls of fourteen small children. And to add to the horror, there’s a second rope. A rope knotted around three very fresh bodies…

Soon, Barnett and Arrowood are struggling to unravel a complicated frame-up, a multi-layered plot of revenge intended to destroy not just the Moons, but Barnett, too. The pair are in a race against time as the London police and other inquiry agents hunt them, and the only way to ensure Barnett has a future is to dive into the murky secrets of the past.

With the Arrowood series—Arrowood and the Thames Corpses is the third installment—Finlay has put his own spin on the “Sherlockian Victorian mystery”. In fact, Arrowood and Barnett are contemporaries of Sherlock and Watson, working in the same bustling city and often crossing paths. But Arrowood has a distinctly uncharitable view of his fellow investigator:

Belasco looked us up and down. ‘Like Sherlock Holmes only cheaper, that right?’

‘Not like Sherlock Holmes at all, sir,’ said the guvnor with a twitch of his nose.

‘That’s a shame,’ said Belasco. He leant back against the balustrade, folding his arms over his chest.

‘He’s solved every one I ever heard about,’ replied Belasco as Moon handed him the jug.

‘They don’t report on the ones he fails to solve. He didn’t solve the case of the Stockbroker’s Clerk. Or the Adventure of the Yellow Face.’

‘Watson says it himself,’ said the guvnor.

Yes, Arrowood and Barnett are a pair of mismatched private inquiry agents (Arrowood is the brains, Barnett the muscle and minder) working in Victorian London. But there the comparisons to Conan Doyle’s most infamous creation end; this pair is decidedly rougher and more uncouth than Sherlock and Watson, often downright unappealing in their behaviors and dress. They traverse a much seedier London, one populated by beggars, brothel owners, and rat catchers. There’s no violin music or silk smoking jackets here.

Indeed, the one real flaw in this series is that Finlay is a little too enthusiastic with shining a light on the grime and gore of Victorian London. There’s a line between authentic grittiness for the sake of realism and outright grossness, and this series staggers over it frequently.

The late 1800s was, to be true, a disgusting time compared to today’s standards of hygiene, and there’s no doubt that disease and pests were common, especially in poverty-stricken areas. But the entirety of London wasn’t a plague pit in 1895, and to describe pus, vomit, sewage, rotting animals, public urination, etc. on nearly every page is overdoing it. At times, such descriptions detract severely from the plot and characters, making it hard to concentrate on Arrowood’s clever deductions and the machinations of the villains. Anyone with a weak stomach will find this story hard going, especially those who prefer more likable, palatable protagonists.

Which is a shame, because the story itself is a well-crafted one. The villains are colorful and their motivations are compelling. The full scope of the frame-up is impressive, and there are plenty of thrilling, unsettling scenes and shocking surprises. The resolution answers all of the lingering questions, and finds some justice for those who’ve been most wronged. Finlay unquestionably knows how to construct a mystery and move a narrative at an exciting pace; if only he also knew when to temper his more loathsome descriptions, Arrowood would be a far more enjoyable series.

Cooking the Books: 15 Minutes of Flame by Christin Brecher

Rachel Howzell Hall has produced a mystery novel that has a second mystery at its heart running throughout as a creeping undercurrent. And Now She’s Gone could have been produced as a pure mystery/private investigator story but ends but being something much bigger. It opens with a haunting snippet from poet Emily Dickinson: One need…

The latest psychological thriller from Araminta Hall, Imperfect Women, explores guilt and retribution, love and betrayal, and the compromises we make that alter our lives irrevocably. Author Araminta Hall had the difficult task of following up her previous novel, Our Kind of Cruelty, which was voted the best book of 2018 by both Crime Reads…

A Pretty Deceit by Anna Lee Huber is the fourth book in the Verity Kent Mystery series, set in the aftermath of the Great War, where the line between friend and foe may be hard to discern, even for indomitable former Secret Service agent Verity Kent. The first anniversary of the Armistice is fast approaching.…