Book Review: Anything for You by Saul Black 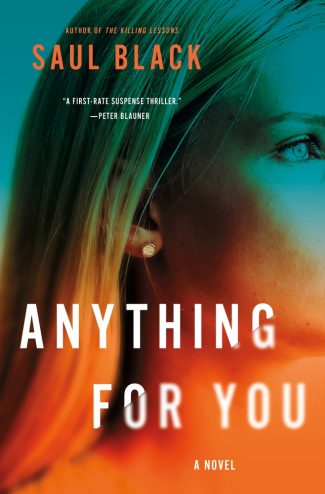 Anything for You is Saul Black’s third novel in the Valerie Hart series, in which the San Francisco Homicide Detective must revisit her past to solve a gruesome murder.

In my opinion, if you’ve read the first two books, you already understand that to know Valerie is to love her, even if she doesn’t think you should. And she certainly doesn’t think you should. Valerie is a tangle of self-destructive and narcissistic tendencies, along with a very healthy libido. Whether she wants to admit it or not, there’s also a good heart underneath all that. She knows she’s a bit of a hot mess, but right now, life is good. And Valerie is doing her very best to be good, which means not messing things up with her husband Nick, a fellow cop who works on the IT side of things. Nick knows what lurks in Valerie’s dark corners, and they’ve moved past the bad stuff, even if some things still hide in the shadows, waiting to pounce. They’re trying for a baby, which is a very complicated proposition for Valerie. But then, it is for a lot of women.

Valerie is also a very good cop and she knows it. She feels like she was born for the job, and once a case gets under her skin, she’ll bend a few rules to get her perp. When she responds to a scene at the home of Adam and Rachel Grant, Valerie feels a bit of her dark past come back to haunt her when she recognizes that the dead man, Adam, is someone she knows.

Four years ago she slept with Adam Grant. Ergo, pass the case to a colleague. On the other hand, she’d slept with him literally. Both of them had been drunk, and halfway through the blurred preliminaries he’d had a change of heart. He’d told her that he’d never cheated on his wife, and despite him and Valerie having boozily made out and gotten half-naked in her bed, it turned out he couldn’t bring himself to start cheating on his wife right then, either.

Valerie probably should pass the case on, but they didn’t actually have sex, after all, and this one looks to be a doozy. She just can’t pass it up. Adam Grant used to be a star prosecutor for the DA’s office then switched to private practice. Now he’s been stabbed and bludgeoned to death and his wife, Rachel, has also been stabbed leaving her clinging to life. Luckily, their 13-year-old daughter Elspeth was at a sleepover. Shockingly, the killer left fingerprints all over the scene, and they match up to Dwight Jenner, an ex-con that Adam prosecuted years ago. What seems like an open-and-shut case becomes more complex when Jenner proves difficult to find. Finding Jenner means digging into Adam’s life, which of course means digging through their home. The basement, where amateur photographer Adam’s darkroom is located, is where Valerie finds the most compelling evidence.

In the red safelight, the colors were annihilated. But the representational content was clear. The first photograph was a rear view of a blond woman in nothing but black stockings and high heels bending over a desk. She was looking back at the camera with her pale hair half covering her face. The one eye that was visible was heavily mascara’d and, Valerie suspected, false-lashed. Glossy lips in a half smile, half pout.

The woman in the pictures is definitely not Grant’s wife, and when confronted with the photos, Rachel reveals that the woman’s name is Sophia, who Adam supposedly had an affair with. They reconciled, but Rachel, understandably, is visibly angry at the photos, which were obviously taken in her home. But who exactly is the enigmatic Sophia? She’s certainly their only lead and might provide clues to Jenner’s whereabouts. Every discovery leads to more questions, which Valerie is bound and determined to answer, even if she has to go to some shady places to do it.

Black weaves past and present to create a visceral tapestry of sex and murder that will lead Valerie down some exceedingly dark alleys. Though reading the first two will certainly enhance the experience, you don’t need to have read them to enjoy Anything for You. Black does a nice job of getting readers acquainted with Valerie without a lot of exposition, and his meticulous plotting will likely stymie even the most jaded thriller fans. This series keeps getting better and better, and each book is a dark gem. If you like ‘em gritty, with a beating heart at the center, this one delivers. Don’t miss it.