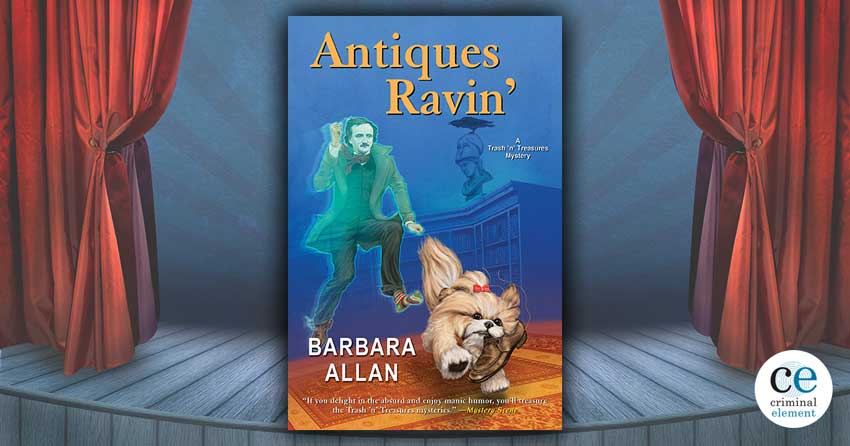 Antiques Ravin’ by Barbara Allan is the 13th book in the Trash ‘n’ Treasures Mystery series.

What a blast of a read! In this Trash ‘n’ Treasures mystery, Vivian Borne has just been elected as the county sheriff, and she’s ready for the job. Her daughter, Brandy, has reluctantly been given the title of pro-bono deputy, and along with their spirited pup, Sushi, they all make up one helluva team. When a murder happens at an Edgar Allan Poe festival, Vivian and Brandy are on the case. As they race to solve the mystery, more murder and mishaps occur, bringing the danger closer than ever to them. They must figure out who the killer is before the festival is over and they lose their chance—or their lives.

Barbara Allan is actually the moniker of a husband and wife writing team. Their unique style really stands out and keeps the reader engaged. The first-person point of view switches between Brandy and Vivian’s voice and is very effective at keeping things fresh and fun. Utilizing this device allows the reader to immerse themselves in the story quite effectively. Here’s an example:

This is Sheriff Vivian Borne (that has a nice ring, don’t you think?), assuming the narrative from Brandy, who has taken to her bed after the shock of discovering a corpse in a crypt (also a nice ring, if a bit bone-chilling).

Poor darling—Brandy, I mean, although that also might apply to the late Morelia, a waitress who waits no more. (Poe worthy, no?) I’m afraid she (Brandy, again) lacks the strong, resilient constitution with which I have been blessed, allowing me to press on solo with the investigation, I hampered by my well-meaning but unimaginative pro bono deputy.

(Brandy to Mother: I do read these chapters of yours, you know. And in answer to your question a few lines ago? No.)

(Mother to Brandy: What question, dear?)

(Brandy to Mother: That wasn’t Poe worthy. Call it a Poe attempt.)

But before I press on, I must address an issue having to do with my campaign for sheriff. I had received quite a few donations from our overseas Trash ‘n’ Treasures readers, supporting my bid, and because there are stipulations (unknown by me at the time) regarding a political campaign accepting foreign money, I feel it necessary to return those donations, to maintain transparency and stay aboveboard. (There’s always the possibility that Russia may have routed me rubles through fictitious names, hoping to tip the scales in my favor—but rectifying this is beyond even Vivian Borne. Spasiba, though!)

Brandy is a fine main character, but I am partial to the eccentric and hilarious Vivian. She’s very spirited and headstrong and, honestly, just overall fabulous. Allan has also written Vivian in such a way that her personality is shown through the formatting as well.

While passing time for the blackjack dealer to arrive, I learned more from Ben about the Sauk Indians, who originated along the St. Lawrence River in Ontario and northern New York State. Driven out by more powerful tribes, the Sauks migrated westward to the Great Lakes of Michigan, and then the fertile Mississippi Valley.

(Note to Vivian from Editor: While the aforementioned is interesting, does it have anything to do with the story?)

(Note to Editor from Vivian: Just trying to redeem myself a little here.)

It’s also worth noting that I haven’t read any of the previous entries in this series, but the authors keep new readers up to speed throughout the story in humorous ways that show off their particular style. For instance, at times there were instructions to skip a certain number of paragraphs if you had read previous books. For those of us that hadn’t, the following paragraphs caught us up succinctly. I appreciated the way this was done.

This story kept me guessing all the way to the end. Just when I thought I had it figured out, I would change my mind. Along with the unique style and point of view, I really enjoyed the Edgar Allan Poe references and quotes peppered throughout. It was truly a fun read. I recommend this one to cozy mystery fans everywhere.