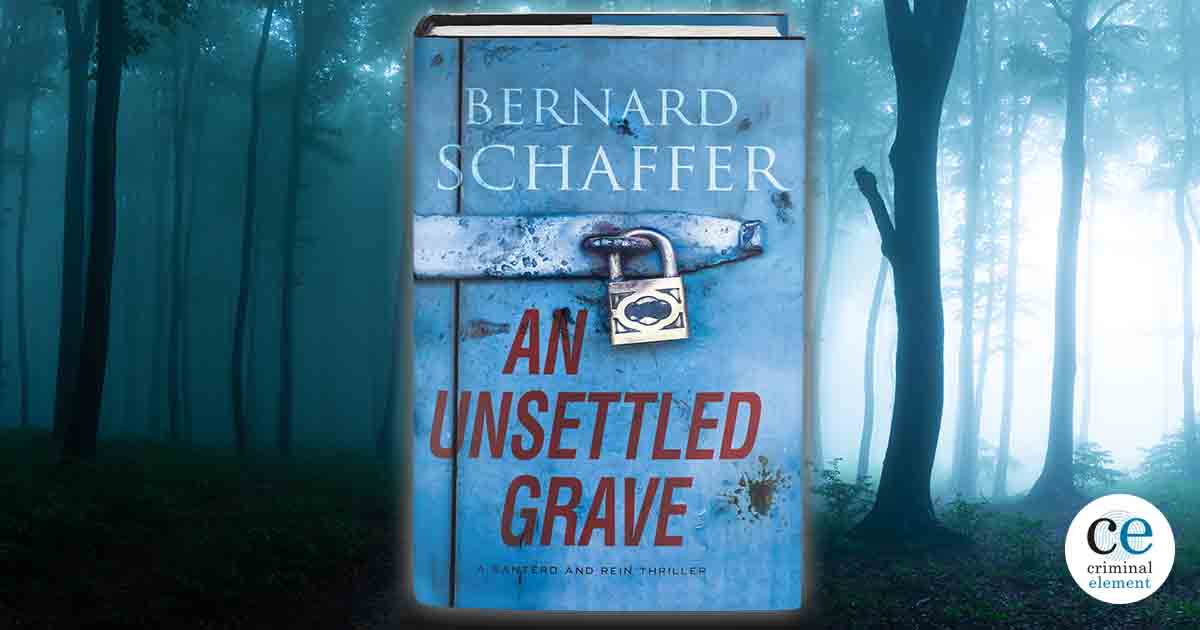 An Unsettled Grave is Bernard Schaffer’s chilling follow-up to The Thief of All Light. Veteran police officer Bernard Schaffer digs deep into the past—and the haunted psyches of the detectives who search for truth . . . at any cost.

County Detective Carrie Santero is overworked, but that’s almost to be expected in her position at the bottom of the Vieira County District Attorney’s Office investigative pecking order. Sent out on whichever grunt task her senior detectives don’t feel like tackling themselves, she’s used to catching crappy cases, and consoles herself that at least she’s not a uniformed officer any longer.

Things would be better if she could get her mentor, the gifted former Detective Jacob Rein, to abandon his secretive life of homelessness, but he’s resistant to all her blandishments. When she finally does pin him down for coffee, he bolts after she mentions a countywide alert originating from Liston-Patterson township, requesting immediate assistance. Mystified by his reaction, she’s then mortified to be assigned to the case by Chief Of Detectives Harv Bender, who’s taken issue with her response to a recent rape case where the victim claims to have been assaulted by a uniformed police officer. Carrie, wanting to quickly clear her colleagues, had asked for the DNA of all officers on duty in the area that night, a move that hadn’t gone over well with the local cops, who saw her request as an insult to their integrity. Bender figured sending her out into the countryside would be the best way to keep her from causing him more problems.

So Carrie heads out to Liston-Patterson, where the discovery of a skeletal foot may finally solve the case of Hope Pugh, a 12 year-old girl who’d gone missing thirty years ago. The local sheriff, Steve Auburn, seems happy just to confirm the girl’s identity and rule it an accidental death. Carrie isn’t so sure, but is even less certain as to whether it’s worth it to press the issue:

In the real world, putting a big case together is a pain in the ass, and the people you rely on for help don’t want to do jack shit. Nobody cares. The labs don’t care. The courts don’t care. You were lucky if the victim cared, six to eight months down the road when it finally went to court and they had to keep taking off work and coming back to testify. That was the reality of police work they don’t tell you in the police academy, she thought. No wonder Auburn wanted to put this case to bed as quickly as possible. Missing person. Found body. No cause determined. Parents notified. Case closed.

Go home, she thought. They don’t want you here. Tell that dickhead Harv Bender you helped out, didn’t cause a fuss[.] Because nobody else cares, and neither should you.

Fortunately for everyone but the bad guys, Carrie is a good cop and she doesn’t quit easily. As she digs, she begins to find startling connections not only to decades-old police corruption, but also to her own mentor’s past. She hadn’t known that Rein grew up in Liston-Patterson, or that he was friends with Hope, or that Hope’s disappearance and the aftereffects would mark the end of his childhood. What she does know is that he needs closure, and that she’s a good enough cop to find it for him.

Carrie and Rein are both excellently drawn characters, and though Carrie provides the primary point-of-view for the book, Rein also shows up in past and present to bring his own unique perspective to the proceedings. While Carrie is earnest, Rein is possessed of a Holmesian detachment that did not endear him to his former colleagues when he worked with them and is even more aggravating to them now. It’s fun to watch him verbally spar with Bender even as he doggedly pursues avenues the actual cops refuse to go down:

“What’s your deal now?” Bender asked. “You some kind of homeless investigator? You riding the rails solving mysteries for the other hobos?”

“Maybe,” Rein said. “Or maybe I just can’t stand to sit back and watch someone like you do it so badly.”

Though Rein is determined to keep his distance from Carrie for reasons of his own, his assistance proves invaluable as he helps her solve not only the mystery of Hope’s disappearance, but also discover the truth behind the deaths of the officers in charge at the time, as well as track down a brutal rapist in the present. Don’t get me wrong, though, Carrie is definitely the star of the proceedings, in much the same way that Bernard Schaffer’s first-hand experience of life as a police detective is one of the best aspects of this wildly entertaining thriller. His wry, often critical musings on police life lend authority to the story, especially since he isn’t afraid to point out where the system fails and where it could be doing better. You can tell that he comes at this from a place of love and respect, and his criticism is all the more meaningful for it.

An Unsettled Grave is one of those well-rounded thrillers that acknowledges the good, bad and ugly of the American justice system, giving us an insider peek into county policing through the eyes of Carrie and Rein. It balances past and present, considering both with an unsentimental but not insensitive eye. While it’s the second book in the series, it still worked remarkably well as a standalone, though hopefully there will be many more books to come featuring our intrepid duo.