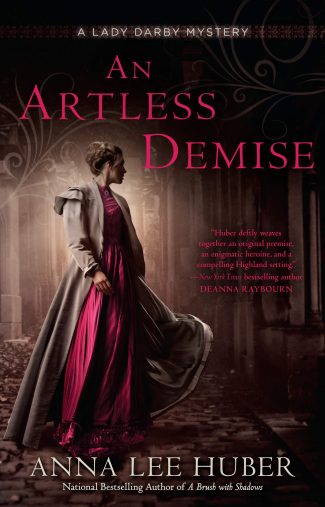 In Anna Lee Huber’s An Artless Demise, the seventh book in her national bestselling Lady Darby mystery series, Lady Darby returns to London with her new husband, Sebastian Gage, but newlywed bliss won’t last for long when her past comes back to haunt her.

As this latest installment of the Lady Darby mysteries begins, Lady Darby and her husband are happily married and awaiting the birth of their first child. But Lady Darby’s scandalous past soon arises. A group of body snatchers has been arrested on suspicion of murder. She knows what that will bring.

“And so it begins again,” I murmured. “The old accusations. The frightened glances and furious snubs.” I gritted my teeth against a surge of anger. “Will the past never leave me?”

Lady Darby’s first husband, Sir Anthony Darby, was a world-famous anatomist. Self-centered and pompous, he had mistreated his wife for the three years before his death.

Only when it was too late did I discover he had wed me for my artistic abilities, forcing me to sketch the dissections he conducted in his private medical theater for a comprehensive anatomical textbook he was writing.

He had been working with the resurrectionists and although his wife knew nothing of his activities she had been blamed and vilified. The scandal is remembered years later and her father-in-law frowns upon her marriage to his son because of it.

Soon after the body snatchers are arrested, the body of a young boy is discovered. Although at first no one knows for sure, it is assumed he was taken by the body snatchers and murdered. Unidentified, he is dubbed “The Italian Boy.” The discovery of his body confirms the work of the resurrectionists.  The news sends fear throughout London.

All the Lady Darcy’s commissioned portraits are canceled, and she is snubbed everywhere. Only her sister and close friends stand by her.

Then Lady Darcy and Gage find a young gentleman of the ton, Lord Feckenham, stabbed to death in the street. He bears some of the signs commonly believed to be associated with the victims of Burke and Hare, the original resurrectionists, who were notorious for murdering people and selling them to medical schools for dissections.

The iconic woodcut images of Burke and Hare showed them using such devices as sticking plasters to smother their victims, and the more lurid broadsheets had already implicated their use in the images of the London burkers.

The entire town is terrified. Lady Darcy, who is blamed, is almost afraid to leave the house. But the worst is yet to come. An associate of Lady Darcy’s first husband is threatening to publish Sir Anthony’s diaries. And someone claiming to be a resurrectionist who had worked with Sir Darcy is attempting to blackmail her. When she does not pay, he leaves body parts on the steps outside her home for her neighbors to see. But Lady Darcy and her husband, accompanied by lady’s maid and valet, preserve and finally untangle the interlocking puzzles, solving the final piece at the hanging of the body snatchers.

A great story: the series characters are appealing and the mysteries surrounding The Italian Boy, Lord Feckenham, and the person behind the blackmail are cleverly plotted. But my favorite part is the setting. The politics of that time, particularly the Reform Bill, are used to good effect and I thoroughly enjoyed learning about the resurrectionists.

Review of A Brush with Shadows, the previous Lady Darby Mystery.