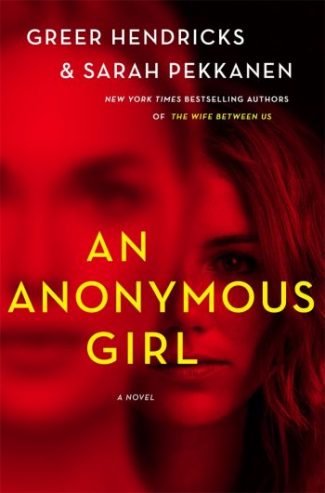 An Anonymous Girl is the next novel of psychological suspense and obsession from Greer Hendricks and Sarah Pekkanen, the blockbuster bestselling authors of The Wife Between Us.

Last January, a new collaboration between longtime editor Greer Hendricks and novelist Sarah Pekkanen took the literary world by storm with the publication of The Wife Between Us, resulting in a worldwide epidemic of jaw droppage. An instant New York Times bestseller, the book has gone to print ten times (and counting), been sold to 34 countries, and is in development as a feature film. Fortunately for understandably impatient fans, the authors are ushering in the New Year with a second title: An Anonymous Girl.

As the story begins, readers are introduced to 28-year-old Jessica (“Jess”) Farris, a struggling makeup artist living in New York City. Despite dreams of working behind-the-scenes on Broadway, she’s taken on private consultation through a reputable agency; the jobs are more predictable and profitable. Still, living in the city is expensive—and she’s got the added burden of secretly contributing to her disabled sister’s monetary expenses for therapy to treat a traumatic brain injury. So when Jess learns of a lucrative study being done by an esteemed psychiatrist, she manipulates her way into becoming a participant, the irony here being that the subject of said study is ethics and morality.

Enter Dr. Lydia Shield, the stylish, sophisticated psychiatrist overseeing this study. While Jess’s initial communications with her are via a laptop computer in an otherwise empty NYU classroom, the doctor soon invites her test subject—whose candid responses and self-awareness strike an immediate chord—to participate in situational social experiments at a greater rate of compensation. Though hesitant, Jess agrees to expand her role, hoping the money will help to alleviate her family’s struggles. Dr. Shield initially serves as both a confidante and role model of sorts, though the ever-intensifying role-playing scenarios she orchestrates—including directives to flirt with specified men—become cause for concern. A startling discovery about a former subject makes Jess’s extrication nearly impossible, as does her level of involvement.

Chapters alternate between Jess’s first-person narration and Dr. Shield’s second-person telling—a clever strategy that mirrors the (supposed) dynamic of the doctor-patient relationship while also revealing myriad ethical and moral transgressions on both characters’ parts. Clearly, a game of cat-and-mouse is afoot; while Jess proves to be a surprisingly adept adversary, the cunning Dr. Shield consistently manages to stay one step ahead. But the addition of a third party results in an element of unpredictability that leaves both women increasingly doubtful and desperate. Consequently, the psychological warfare reaches breathtaking proportions as the authors lob a few third act bombshells, some of which are merely surprising while others reverberate with shock waves.

As with its predecessor, the less said about this book’s plot points the better. After all, the exhalation and joy of discovery are best left for the reader to experience firsthand. What can be said is that Hendricks and Pekkanen have delivered the goods, achieving a triumphant thriller that’s easily on par with, if not greater, than their first. An Anonymous Girl is destined to be anything but…

Take a visual tour of An Anonymous Girl with GIFnotes!