Book Review: Alone in the Wild by Kelley Armstrong 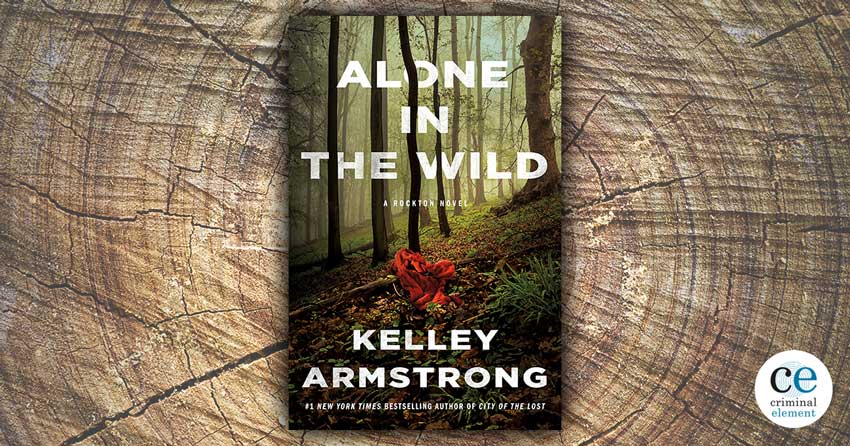 Alone in the Wild by New York Times-bestseller Kelley Armstrong is the fifth book in her Casey Duncan series, where the hidden town of Rockton is about to face a challenge none of them saw coming: a baby.

Alone in the Wild is the fifth Rockton novel, set in the fictional town in Canada’s Yukon Territory. It’s off-the-grid, secretive, and internet-free, a description that just scratches the surface. The climate is “characterized by long, cold winters and brief, warm summers.” Outside its perimeter are settlers, some of whom are hostile and unpredictable. Rockton, its inhabitants, its rules, and its raison d’être are at the heart of the series.

Detective Casey Butler and her beau, Sheriff Eric Dalton, are taking a couple of days off to go winter camping in December. Time off is catch as catch can because, although Rockton has less than 200 people, it’s known as the “murder capital of the world.”

We are a town of fugitives. Everyone here is running from something. Some are victims, on the run from ex-partners, stalkers, anyone who might want them dead through no fault of their own. This is the true purpose of Rockton—a refuge for fleeing persecution. It’s also home to white-collar criminals, whose misdeeds pay our bills. Then there are those whose mistakes—often violent ones—brought them to Rockton under expensively bought cover stories given even to Dalton. So it’s no surprise that we have a murder rate.

Casey and Eric are roughing it in the bush, enjoying a tequila-fueled mini-vacay. As Russian writer Anton Chekhov, no stranger to winter, said, “People don’t notice whether it’s winter or summer when they’re happy.”

Casey has slept in. She’s on her own if you don’t count Storm, a 140-pound Newfoundland tracker. Eric’s off hunting. He left her a note, breakfast, and a warm fire, but after she plays with Storm for an hour, “the fire is down to embers.” Eric said, “Don’t wander,” but Casey takes that as “a suggestion rather than the imperative it seems.” What is imperative is finding kindling.

That’s life up here. Constant work just to survive. Heat doesn’t come at the flick of a switch. Food isn’t the nearest fast-food joint away. Water isn’t a simple matter of turning on a tap.

Casey searches for dead trees, which are “the best source of winter kindling.” Playful pup Storm wants to romp some more. The frolicking ends when Casey hears an inconceivable noise.

The noise comes again, a plaintive wail, like a baby’s cry.

Storm catches it. She stops and pivots, ears perking. She glances at me as if to say, What is that?

Is it an animal that isn’t hibernating—a cougar, a bird, a fox? The weak cry seems to be coming from a buried log. The snow is up to her knees, but Casey powers through and finally reaches the heap. She claws away, hits fabric, and sees a dead woman’s body. There’s no sound; is the baby trapped?

Then, at a whimper, I realize the sound comes from under her jacket. I tear at it, the fabric frozen and stiff.

Blood. I see blood under the snow. I wrestle the jacket open, and there is the baby, clutched to the dead woman’s chest.

Casey is out of her depth when she’s confronted with a tiny baby wrapped in swaddling clothes. Shouldn’t a homicide detective figure out what killed the woman or what to do? Casey returns to her tent, unwraps the babe, discovers she’s a healthy baby girl, and shifts to triage. The baby must be hungry, thirsty, and cold. Casey’s rising hysteria is palpable. Eric returns, takes one look at Casey, and kisses her.

I’m startled at first, and then all I feel and smell and see is him, and the panic evaporates. Tears spring to my eyes. As he breaks the kiss, he brushes the tears away and says, “Everything’s okay. You’ve got this.”

Kelley Armstrong presents a terrifying situation—a dead woman and an abandoned baby—then imperceptibly shifts the tone into something recognizable and manageable. Eric and Casey are a team, “only an hour’s fast walk from town,” so they drip water into the baby’s mouth before they go back and examine the dead woman more closely. There are a scalp wound and a bullet hole in her leg. They make a stretcher to transport the body back to Rockton, sheltering the baby inside their clothes.

There are no infant supplies in Rockton, as Casey’s sister April helpfully points out, because the community doesn’t “allow anyone under eighteen, and there’s a reason why we have a shitload of condoms and diaphragms and every other method of contraception.” But rules are meant to be broken, and the Rockton community comes together to care for the abandoned infant while Casey and Eric figure out who she is and why she was abandoned. Who was the dead woman? “A hostile turned settler. A former hostile with an infant baby. Murdered in the snow. Both of them left to die.” The pair searches out settlers and hostiles alike, maneuvering through challenging interviews, some of them brutish and dangerous.

Rockton’s impending Winter Solstice celebration is the backdrop to the investigation. It’s Casey’s second Christmas in Rockton. “This place goes a little nuts at the holidays, to stave off going a little nuts in general as the days get darker and the temperature plummets.”

If Alone in the Wild is your first Rockton story, you’ll want to catch up to find out what makes this unique community tick. Kudos to Kelley Armstrong’s imagination; Rockton deserves its reputation as “perhaps the most interesting town in all of contemporary crime fiction.”