Book Review: All the Pretty Things by Emily Arsenault 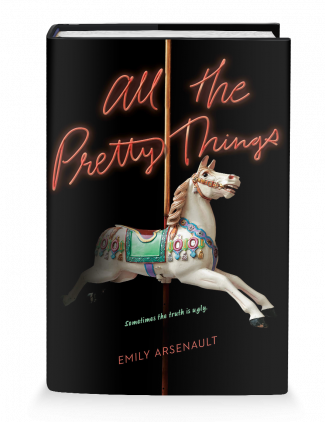 All the Pretty Things

Emily Arsenault returns to the Young Adult scene with All the Pretty Things, an all new thriller about a boy who turns up dead under suspicious circumstances and the one girl who may be the key to solving the mystery of his untimely death.

Emily Arsenault is the critically acclaimed author of six literary mysteries for adults. Her debut, The Broken Tea Glass, was both a New York Times Notable Crime Book of 2009 and a Library Journal Editors’ Fall Picks, 2009. Her follow-up, In Search of the Rose Notes, was included in the 10 Best Mysteries of 2011, as selected by the Wall Street Journal. Her most recent release is 2018’s The Last Thing I Told You. Prior to that, Arsenault had published her first novel for young adults, The Leaf Reader. This March, she returns to the YA genre with All the Pretty Things.

As the story opens, seventeen-year-old Ivy Cork is summoned to her father’s New Hampshire-based amusement park, Fabuland, to talk her BFF, Morgan, down from the top of the Ferris Wheel. Morgan recently discovered the body of a former classmate and co-worker, Ethan Lavoie, dead of an apparent fall—and then herself went missing shortly after. Ivy, away on vacation with her mother at the time, knows little of the incident beyond what’s been reported in the news, though Morgan’s cryptic comments during their brief reunion lead her to believe that Ethan’s death may not have been an accident.

Despite Ivy’s loyalty to her family, friends, and fellow employees, she can’t deny her concerns about the night Ethan died—and the more questions she asks them, the more certain she becomes that they’re hiding something. Even Morgan, who’s been put under psychiatric observation following her dramatic reappearance. But finding out the truth is a complicated—and perhaps even dangerous—task. And Ivy, as her self-absorbed dad’s trusted right-hand woman, already has more responsibilities than somebody of her age and experience probably should. In fact, it’s this unenviable position (and the assertiveness it requires) that exposes her to the frictions behind Fabuland’s friendly (and sugar-sprinkled) façade.

The narrative is told entirely through Ivy’s point of view, which allows readers to feel the insular nature of her situation; indeed, despite being surrounded by people, there’s a strong sense of detachment that is further amplified by her single-minded determination to discover the truth about Ethan’s death. But Ivy’s inquisitiveness has unintended consequences, and she soon realizes that there are other, older mysteries to be solved—and ones that hit even closer to home. Arsenault is a skilled tactician who handles timely, transgressive topics with subtlety, ensuring that the story’s suspense isn’t overpowered by its weighty subtext.

All the Pretty Things is a compelling coming of age drama masquerading as a murder mystery. Sure, the familiar elements (think the Five Ws) are all in play but it’s questions of character that demand particular attention—which is fitting of a YA novel, given the formative powers of adolescence. Emily Arsenault takes readers through a veritable house of mirrors, where appearances belie realities, and nothing is quite as it seems. You’ll be glad you went along for the ride, even if you exit wobbly-kneed and short of breath. After all, that’s half the fun, isn’t it?