Book Review: All the Dirty Secrets by Aggie Blum Thompson

July 21, 2022
Set in the upscale DC private school scene, where silence can easily be bought, Aggie Blum Thompson's All the Dirty Secrets asks how far you would go to protect your status and your family, and if some secrets should ever be revealed. Check out Doreen Sheridan's review! 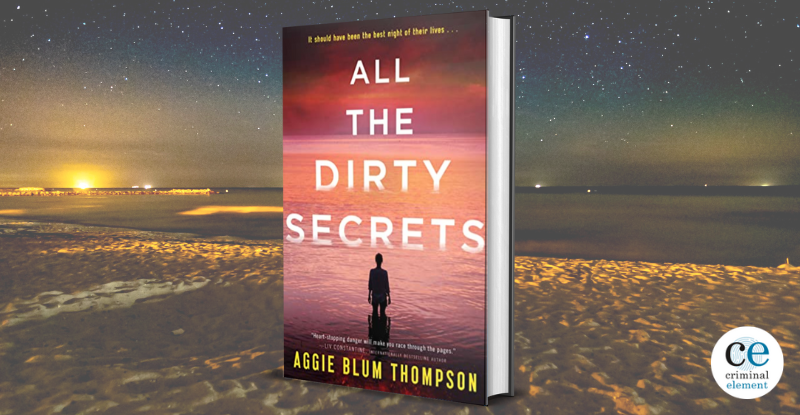 Liza Gold is going through a lot. Having recently divorced her husband Daniel, she’s now dealing with their daughter Zoe’s seemingly never-ending mood swings, with herself the prime target for her sixteen year-old’s hostility. But at least she’s able to escape for a weekend, as Zoe is staying at Daniel’s while Liza accompanies her closest friend Shelby Smythe to Dewey Beach.

Shelby’s twins have just graduated from Washington Prep, and are intent on upholding the Beach Week tradition of partying without supervision that Liza and Shelby themselves participated in with their friends twenty-eight years before. Shelby, however, is well aware of how that worked out all that time ago, so has discreetly arranged to have an adults’ weekend within reach of her kids. It helps that her family owns a house close to party central.

Liza still has mixed feelings about Beach Week. While she loved being able to spend that precious time on the cusp of adulthood and independence with her dearest friends, her memories are marred by the disappearance of her best friend, Nikki Montes. The police assumed Nikki had become separated from the other teenagers while on a drunk midnight swim and drowned. Liza was willing to accept that verdict… until she’s asked as an adult to identify the body of another young woman, drowned in eerily similar circumstances:

When I was a reporter, dead bodies were a regular part of the job. But that was a long time ago, when I was a different person. Not just younger but braver.

Motherhood has made me fragile. My whole body begins to shake, as under the light of the full moon, I come face-to-face with a girl, her wet hair splayed out like a mermaid’s.

I gasp. I do recognize her.

Emery Blake has just graduated with the Smythe twins from Washington Prep, where Liza works as de facto head of communications under the close supervision, if not outright micromanagement, of the controversy-averse school principal. But of even greater concern to Liza is the fact that the person who called in the drowning was Zoe herself. Zoe apparently snuck out of DC with Emery to Beach Week, and is now hysterical with grief at her best friend’s death. Liza wants to believe that the drowning was an accident like Nikki’s was, but Zoe insists that Emery was murdered.

As connections and parallels begin to surface between Emery’s death and Nikki’s disappearance, Liza has to confront her own obliviousness to, if not outright complicity with, the poisonous attitudes that allowed her best friend’s vanishing to become a footnote not only in her own life but in the annals of their society. For Washington Prep—that bastion of the privileged and powerful—is the kind of place that smothers any hint of scandal, no matter the collateral damage. Nikki was one victim. Was Emery another? And, even more frighteningly to Liza, could Zoe be next?

This was a very cleverly constructed whodunnit that will have you guessing right up to the big reveal. Told from the viewpoints of Liza, Zoe and Nikki herself, All the Dirty Secrets shifts deftly through time and space to present a complete and compelling picture of what it means to deal with privilege—your own or others’. Perhaps the most sympathetic viewpoint to me was Nikki’s as she tries to navigate the social minefield of being a middle-class brown girl with rich white friends who seemingly get away with anything, even hard drug use:

Not that Nikki wanted to do drugs. It wasn’t about that.

But she wanted to be like them, even if just for a week.

Wanted to just once taste entitlement. That sense that, even if you messed up–got stoned, drunk, crashed the car, hooked up with some random guy—there would be no permanent consequences.

I devoured this book in a day, so absorbed was I in this examination of morality told from the perspectives of three very different but very realistically depicted women. And as a DC-area resident whose pet peeve is poorly researched portrayals of the city and surrounding suburbs, can I say how delighted I was by this thoroughly lived-in novel? I loved all the descriptions of places I know and enjoy (AU Park! 18th St! The Capitol Crescent Trail!) and am looking forward to exploring some of the recommendations I haven’t yet had a chance to visit, with the Parkway Deli being highest on that list.

But even if you’re not a DC-metro-area local like I am, there’s so much to enjoy in this gripping, topical tale of accountability and murder, and how mindsets are passed along from parent to child. All the Dirty Secrets is as juicy as any beach read but hits harder, refusing to be complacent about the potential for anyone to do evil, or for anyone to finally step up and do the right thing.