Book Review: Ain’t Nobody Nobody by Heather Harper Ellett 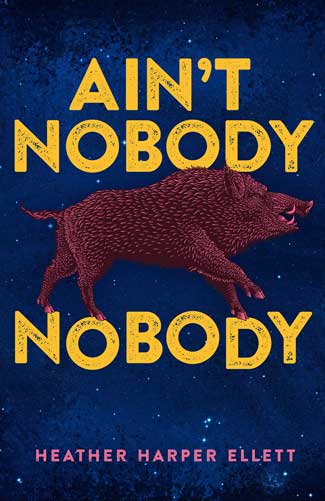 Ain’t Nobody Nobody by Heather Harper Ellett is a riveting debut novel about family and loyalty, old grudges, and new lives—a cross between Faulkner and Breaking Bad from a talented new writer with an authentic Texas voice.

Heather Harper Ellett is a vibrant new voice in the mystery scene. Ain’t Nobody Nobody was a delight to read. However, when I first started reading it, I had my doubts.

The novel opens with Randy Mayhill killing a wild hog that his dogs had cornered. He kills it instantly with a knife and swiftly dresses it. The bloody scene is over in the first paragraph. It’s not as gratuitous an opening scene as I’d feared. Mayhill’s actions in the opening paragraph reveal much about his character and one of the main problems facing his community. He kills the hog quickly and efficiently. He shares some scraps with his “hero” dogs as he works on the hog “because fair was fair, it was their kill.”

In the next paragraph, we’re told that his best friend, Van, had once said that Mayhill approached life like hand-to-hand combat. The comment seemed like a compliment to Mayhill until he realized Van didn’t mean it that way.

The setting is rural East Texas pine country in the late 1990s. Feral hogs are out of control, infesting the area. They’re destroying crops and eating just about anything in sight, including people if they get in the way and maybe corpses. Madcow disease is in the news, and Oprah is sued by the beef industry after saying she’s not going to eat hamburgers. A blight has destroyed much of Van’s pine tree population from which he had made his living, turning him into a desperate man.

There’s nothing to fall back on in this area. It’s a hardscrabble life for most folks. Everyone can see how poor the blacks are who live in town. The whites are just as poor and attempt to hide their poverty by living out in the country.

But that doesn’t mean they’re not educated. Mayhill and Van are both readers of the classics. Shakespeare, Thoreau, Fitzgerald, Larry McMurtry, and others fill their bookshelves. Like the hogs, the books and writers are more than just props. The themes of these great writers have shaped the characters’ lives and are infused into this story.

Mayhill spent his life in law enforcement. His crowning glory was achieving the position of sheriff, a job he lost due to a scandal two years before the opening of the novel. Mayhill is mourning his job and the death of Van, his life-long best friend, to suicide. His only friends are his beloved dogs. Although he attempts to look out for Van’s daughter, Birdie, and mom, Onie, they don’t want much to do with him. Everyone is hurting. Retired English teacher Onie is so distraught over losing her son that she no longer reads. She sits and watches TV all day long, saying things that don’t make sense. Mayhill spends his days listening to the police scanner, cleaning his antique guns and handcuffs and drinking Dr. Pepper.

And then, a dead man is discovered slumped over a fence. When Mayhill arrives—alerted to the body by circling buzzards—hired hand Bradley, who worked for Van, and Birdie are already on the scene. Nobody bothers calling the police because it’s Texas and this is private land. Plus, the new sheriff is an 85-year-old man on oxygen. The story takes off from here. It’s a good set up and a solid mystery based on a situation specific to this time and place.

What kept me reading wasn’t only my interest in finding out who done it and why but learning more about this rural community. Ellett has written fantastic descriptions of her characters, both their external looks and internal landscapes. Bradley “was dirty blonde and big … and had the vacant look of a Ken doll, a numb open-mouthed expression not unlike the hog Mayhill had just gutted.” Birdie’s pale skin is even paler than usual, “like sausage casing.”

These characters are beaten up, dirty, distraught, and in some cases, very much loved by one another. For some, however, the harsh life has led to alcoholism or a scrapping for survival that has left no space for love. They’re quirky but not annoyingly so.

Ellett has a real talent for witty descriptions and one-liners. “The radio spewed out sad excuses for country music, which as far as Mayhill could tell was just rock and roll sung by Gomer Pyle.” Or this, “And so in the way that teenagers register everyone over thirty as an amorphous blob of middle age, the importance of a man neither of them recognized would not land.” Thankfully, Ellett also has a knack for spacing these wisecracks in a way that don’t make them feel overdone or so thinly strung that they seem jarring when they do appear. The flow of the writing and the unfolding of the mystery are exceptional, especially for a first novel.

First-time author Ellett is a therapist in private practice, and she deftly weaves her understanding of human nature through these characters’ conversations and thoughts. While I wouldn’t call this a psychological mystery, the depiction of the emotional strain that the characters experience makes them feel well-rounded and complex. The anguish of grief. The shame of misplaced guilt. The desperation of economic hopelessness and the delusion or ruthlessness it causes. The need for gentle human touch. Characters in such precarious situations often come off seeming one-dimensional. That’s not the case here. Ellett infuses her novel with compassion for her characters but doesn’t slide into sentimentality.

This is a gritty, well-written story with so much heart. I didn’t anticipate the ending, but it is one that rings true for the characters. Ellett is an exciting new voice on the mystery scene, and Ain’t Nobody Nobody is a fantastic read for those who like a straightforward mystery with flesh-and-blood characters and a strong sense of place.