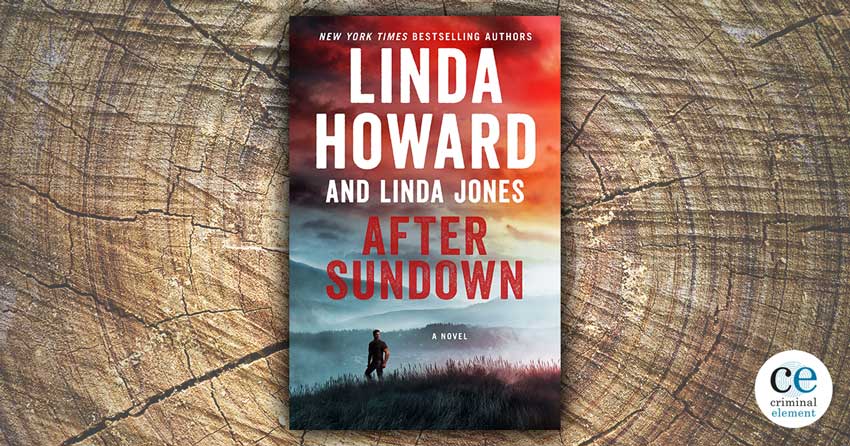 After Sundown by New York Times-bestselling authors Linda Howard & Linda Jones brings together two guarded hearts in a battle for survival after a natural disaster knocks out the power grid in a small Tennessee town.

Is it fate, synchronicity, or happenstance when a book that speaks to our experiences and fears arrives just in the nick of time?

After Sundown is set in East Tennessee’s Wears Valley, a hilly, wooded part of the state where power outages are common. Typically they don’t last very long—a major outage might keep the lights out for a week or so. People are prepared. Many have wood or gas stoves, home generators, and well-stocked freezers. For generations, folks have hunted and fished, not just for sport but to put food on the table. Home gardens are common, and what people don’t eat, they can or freeze. Appalachians are well-prepared to live off the grid. But what if a power outage lasts for a year or more?

Former military man Ben Jernigan comes by Sela Gordon’s general store and unusually fills his shopping basket to the brim a couple of times. Since Linda Howard’s heroes are famously inscrutable, sometimes verging on downright unfriendly, it’s surprising when Ben offers kindly advice, saying, “You might want to put a few things back for an emergency, just in case.” An emergency? Sela’s never going to be rich, but she makes a good enough living selling essential groceries and gas. Ben continues, stating, “The news hasn’t hit yet.” Sela doesn’t have a clue what he’s talking about.

“There’s a solar storm headed our way. A CME.”

“Coronal mass ejection.” The words were clipped. “A big one. If it’s as bad as predicted, the power grid will go down.”

“We’ll have a power outage.” They lived in the mountains. Power outages were a fact of life, though their local utility was a good one.

A hint of impatience flared across his expression. He looked as if he already regretted stopping to talk. “A power outage that will likely last for months, if not a year or longer.”

Sela hadn’t pegged Ben for a “survivalist slash conspiracy theorist.” When Aunt Carol arrives, Sela tells her about the morning’s excitement. Carol sighs while she sweeps the floor, “Damn it. Why are all the good looking men nuts?” She opines she should have known when she heard he had a ham radio. Folks in Tennessee are famous for spinning a tale—Carol remembers “when the calendar went from 1999 to 2000,” she bought enough toilet paper to last a year and made sure she had a “nifty windup radio for emergencies.”

But what if he’s right? It couldn’t hurt to stock up a little. He advised getting cash and “staples, canned goods, batteries,” ending the exchange with the universal answer, “Just Google it.” Maybe Sela should Google it while she still has power. She loads up with everything Ben suggests, puts gas in her car, fills her prescriptions, and tops off her cart with a few bottles of whiskey.

It turns out Ben is right. The power goes out—it’s not a drill—and the lights don’t come back on. Perhaps you’re thinking there are similarities between the social distancing that Americans are currently being encouraged to embrace and Sela’s situation. Stocking up on staples and all. But that’s where it ends.

Benjamin Franklin said it best, “We must, indeed, all hang together or, most assuredly, we shall all hang separately.” Food. Shelter. Warmth. Safety. Health. What about intangible things like spirituality, education, music, and love? Sela, a born organizer behind an introvert’s disposition, puzzles over what’s needed. She thinks about the skills of the mountain men and women—weaving, carving, throwing pots, growing plants from seeds, herbal medicine—and realizes the wisdom and skills of her elders will be a vital asset. The old-timey saying “Use it Up, Wear it Out, Make it Do, or Do Without” rings true as the months grind on.

It’s not idyllic. The world outside is falling apart. Gas is currency, and Sela is under siege when some of the more nefarious members of her little community learn she has hoarded gas at her little service station, not wanting to release it until it can do the most good. When Ben learns Sela is besieged from within and without, the former soldier is finally enticed to become the leader of a homespun militia.

Linda Howard & Linda Jones’s After Sundown is realistic and thoughtful—a perfect companion if you’re housebound and Netflix is starting to pale. You’ll develop a new appreciation for electricity, running water, and streaming video!