Book Review: A Spell of Murder by Clea Simon 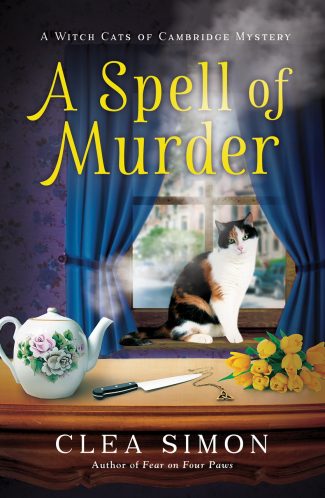 A Spell of Murder

A Spell of Murder by Clea Simon is the first book in the new Witch Cats of Cambridge series.

This delightful series debut revolves around a trio of feline sisters and their owner—or as they prefer to call her, their person, Becca Colwin. Both newly single and newly unemployed, Becca has thrown herself into honing her paranormal abilities with the help of the coven she’s recently joined. When a pillow materializes before her from the ether, she thinks she’s finally coming into her own.

Like the rest of her family, Clara was a witch cat, endowed with magical abilities above and beyond the usual feline mysticism. But that didn’t mean she had unlimited powers. Sure, she could pass through solid objects like doors and walls. Those powers were sort of related to how she could summon things, like Harriet did that pillow. And she could make herself more or less invisible, as all cats—even the non-magical ones—can, which is why humans trip over them so often.

Though cats aren’t supposed to reveal their abilities to humans, Harriet thoughtlessly conjured up the pillow for her own comfort. Since Becca happened to be performing a spell at the same time, the woman naturally assumed it was her own doing. This, of course, is also the view of the other human members of the coven, who begin to look at their latest recruit with greater interest and respect.

Various members seem to start demanding more attention from her, from the handsome coven leader (and only male in their group), Trent, to pretty, nervous Suzanne, who invites Becca to her home for a private conversation. The conversation is not to be, however, for when Becca arrives at Suzanne’s apartment, she finds the other woman dead, stabbed through the throat.

As the police investigate, all the evidence points to the involvement of someone close to Becca, if not Becca herself. Determined to clear her name, she flings herself as enthusiastically into bringing a murderer to justice as she had into witchcraft, to the continuing alarm of her cats. While Harriet’s primary concern is how all these shenanigans might interrupt her feeding schedule and Laurel prefers to fixate on and subtly influence Becca’s love life, Clara prefers to use her powers for the explicit benefit of the woman she feels bound to protect. So Clara sets about helping her owner, with her sisters following far more reluctantly.

A large part of A Spell of Murder‘s charm lies in Clara’s narrative viewpoint and the contrast between human and feline perspectives. Here, Clara is snuggling by Becca as the latter is researching the ancestor whose existence sparked her interest in witchcraft in the first place:

In truth, the little calico had only the slightest idea what Becca did as she tapped the machine on her lap, but as her person clicked away, she had recognized the family portrait—and her own feline forebear—as it surfaced once more. From the one startling image and from Becca’s various comments as she summoned other, similar sights, she’d gleaned that the young woman was once more looking into her own past and, unintentionally, that of the feline sisters. How this slim machine helped her do that might well be Becca’s own form of magic, the plump calico mused. Besides, Clara acknowledged as she shifted to make herself even more comfortable, the computer was warm.

I quite enjoyed the direction the ending takes the series in and am looking forward to reading more of Clara and Becca’s adventures. I rather hope Harriet and Laurel grow to be more agreeable to their long-suffering youngest sister, but I suppose their aloof and ornery manners are more in keeping with their species (though, personally, I have known and loved far more affectionate cats like Clara than her siblings). Regardless, a fun new cat mystery that effortlessly mixes in paranormal elements with murder and a little romance.