Book Review: A Secret About a Secret by Peter Spiegelman

June 7, 2022
In Peter Spiegelman's A Secret About a Secret the investigation of a gifted young scientist's murder on the secluded campus of a biotech firm exposes secret after secret. Read on for our review! 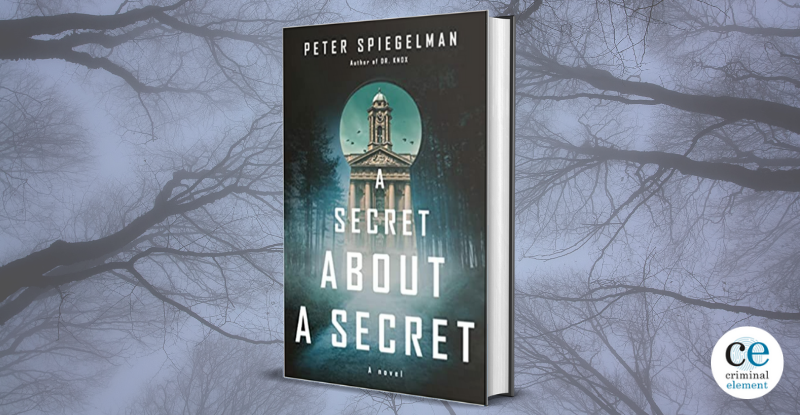 Peter Spiegelman spins a gripping tale of deception, betrayal and murder on a remote campus of a biotech firm in his latest offering, A Secret About a Secret. Agent Myles is a member of Standard Division, a shadowy government agency with a reputation for ruthless investigations in service to the state. What state this is, readers are never told.

When Myles arrives on the campus, having been told only that a murder has occurred and that it’s in the state’s interests for him to look into the matter, he’s met by Nadia Blom, his official liaison with Ondstrand Biologic. She’s somewhat chagrined to find out exactly how little Myles knows about the death that’s causing so much turmoil for her employers:

“Don’t your people tell you anything? Don’t they brief you?”

“As a rule, they find it’s best if I hear things for myself. They believe less mediation means less bias introduced. My experience is that bias finds a way. Nevertheless…”

Lines appeared across her brow. “So what do you know?”

“About your company and what you do here: nothing. About the circumstances that led Dr. Witmer and Dr. Hasp to call on us today: also nothing.”

Nadia Blom’s mouth opened, but for a while no words came out. “Nothing at all? Nothing? Then what good are you?”

“A question I ask myself often. That said, if you’d care to relieve a bit of my ignorance, I might manage something productive. Or at least manage to keep busy.”

Myles’ dry humor often alleviates the grim realities of his day-to-day activities. He must not only track down the killer of the brilliant, beautiful Dr Allegra Stans, but also find out why Standard Division cares so much about her death. As Myles probes into Allegra’s past, he uncovers her less-than-ethical history—and the disturbing reason why Ondstrand Biologic chose to build their cutting edge tech campus on the remains of a long-shuttered boarding school tainted by scandal.

The remote location of the campus lends a hothouse vibe to Myles’ investigation. The researchers and employees do their best to cooperate with this pesky agent from a feared government division without implicating themselves in Allegra’s murder. Dr Pohl, the newest member of the board, is the most forthcoming of the lot when discussing with Myles the rarefied air of the place:

“Sheltered. I suppose it is that—like being back in uni days, or even earlier. It used to be a boarding school, you know.”

“And it is a bit out of the way. Though the towns nearby are pleasant enough, if a little precious. They have all the mod cons.”

“I wasn’t thinking just of the physical circumstances or the local services. How is it culturally?” Pohl’s face clouded again, and his brow furrowed. “A small company on a closed campus, far from the wider world–I wonder if office personalities and politics aren’t oppressive sometimes–even suffocating.”

It’s the perfect atmosphere for an isolated manor house mystery, which is only one of the many sub-genres at play in this refreshingly inventive take on the crime novel. From the Gothic undertones of the scandal-racked boarding school and the slick machinations of modern corporate espionage, to the Scandinoir atmosphere of the bleak coastal towns and the techno-thriller details of what exactly Ondstrand Biologic is capable of doing, this novel effectively melds various strands of detective fiction to create something fresh and original.

I hope this is merely the first in a series, as Myles is a tremendously engaging, intelligent hero I definitely want to read more about, and the speculative setting is ripe for further exploration.