Book Review: A Page Marked for Murder by Lauren Elliott

November 9, 2020
In Lauren Elliott's A Page Marked for Murder, a murder and a missing first edition of The Secret Garden have rare bookstore owner Addie Greyborne running around her Massachusetts town trying to read the clues... 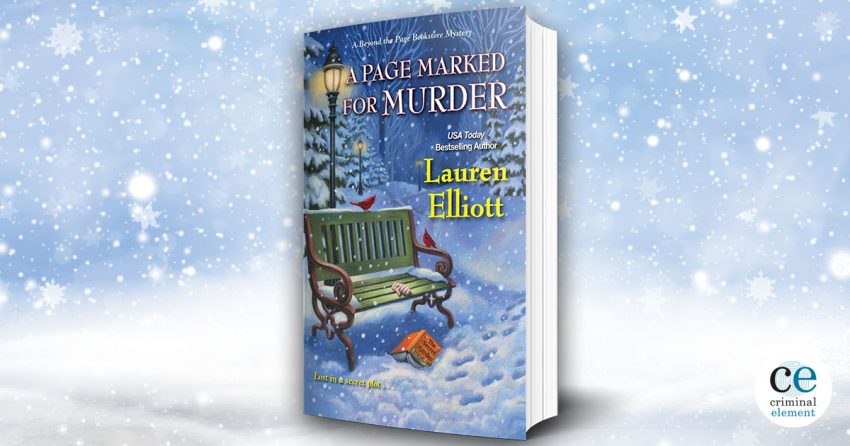 Cozy mystery series often have a pleasing formula and the Beyond the Page Bookstore Mystery series is no exception. The key elements are murder paired with a missing and/or stolen literary artifact that would interest antiquarians. In A Page Marked for Murder a first edition of Frances Hodgson Burnett’s perennially popular children’s book, The Secret Garden, disappears.

The convoluted plot requires many moving pieces to set up the story. Heroine Addie Greyborne’s older friend Gloria takes a tumble from a ladder and ends up in the hospital. Addie volunteers—or should I say “is volunteered”—to babysit Gloria’s precious baby Pippi, an intelligent and lovable dog. Addie and Martha, another friend of Gloria’s, go to her house to gather Pippi’s favorite necessities. Addie spots The Secret Garden on Gloria’s bedside table: she’s an expert at evaluating old books and one look at the title page confirms her suspicion that it’s very valuable. Martha says the book belongs to her daughter Paige Stringer, the assistant manager at Addie’s Beyond the Page bookstore.

“I don’t know. It’s just some old book her useless father left her when he ran away from us when she was about three.”

“Martha”—Addie snapped her mouth shut and stared at the woman—“this old book is worth about twenty-five thousand dollars.”

“What?” Martha’s hand flew to her chest.

Addie feared the older woman would keel over right then and there.

Two deadbeat dads connected to Martha and Paige are in Greyborne Harbor ostensibly to attend the popular Fire and Ice Festival. Brett Palmer, “Emma’s no-good father,” is in the house (Emma is Paige’s young daughter) as is Ken Stringer, Martha’s ex, the father of her five daughters. Emma’s father, Brett, is found dead in the snow behind Martha’s bakery.

Martha, the bakery owner, has no alibi—and has been seen in a heated argument with the victim. And the next thing Addie knows, that first edition has gone missing. Is there a connection between the body and the treasured tome?

Martha, Paige’s prickly and protective mother, is arrested for Brett’s murder. Addie is sure Martha is innocent and sets to work to find the real killer. Addie’s methods of crime-solving are old school—masking tape and brown paper—but they work for her.

This very paper had come in handy in the past, and it didn’t take her long to fix a sheet by all four corners to the wall on the left side of her fireplace. After a quick search through the top drawer of her aunt’s antique desk, she found a black felt-tipped marker and was ready to roll.

She sets up two columns, one headed by Murder and the other Book. It’s a stream-of-consciousness delineation of the crime (i.e. Victim involved in two very public family disagreements—Brett, Martha, Ken Stringer) but it’s a method that has proven successful, so she runs with it. As is often the case, Addie’s crime-solving skills are not always appreciated by the police, particularly her former beau, Greyborne Harbor’s Chief of Police Marc Chandler. The tension between a gifted amateur detective and the local police is reminiscent of the long-running Aurora Teagarden Hallmark Mystery series starring Candace Cameron Bure. Aurora is a librarian, not a bookseller, but close enough.

“Imagine my surprise at discovering you at yet another scene that involves a dead body,” Marc said, planting his hands on his hips. “Tell me, Addie, is this all part of your magnetic personality or do you go looking for bodies?”

She rubbed the top of her throbbing head but didn’t know what to say. He was right, not so much about the magnetic personality bit, but about her having been at the scene of most every dead body discovered in Greyborne Harbor during the past two years.

Who would think a quaint New England town would be such a magnet for murder. Unless Addie’s the magnet? A bookstore owner with her fingers on the pulse of the community is not unknown in cozy mysteries but Addie has a rather chequered past. Her fiancé was murdered, as was her father. Addie also had a relationship with the chief of police although she is now happily involved with Simon, a trauma surgeon and the local coroner. In other words, Addie is a typical thirty-something, blessed with a career, close friends, and a delightful boyfriend. She also has a professional background that lends itself to solving mysteries.

However, she smiled to herself as she hopped over a snowbank by the library parking lot. He never said she shouldn’t use her wicked research skills on the computer, did he? She had the Earth mapping app, and she had an online catalogue of ancient weaponry from when she worked at the Boston Library and the British Museum. She put her head down and forged through the park. It was time to go twenty-first-century sleuthing.

It’s the mixture of “twenty-first-century sleuthing” and old-fashioned methods that make Lauren Elliott’s Beyond the Page Bookstore mysteries shine. Addie comes up with the perfect metaphor to describe the intertwining of murder and a valuable book: “It was though she had the puzzle pieces from two different boxes dumped on a table and mixed together.” Readers, enjoy the challenge of determining which clever clues go “with the book mystery puzzle or the murder puzzle,” because the solution is quite opaque.