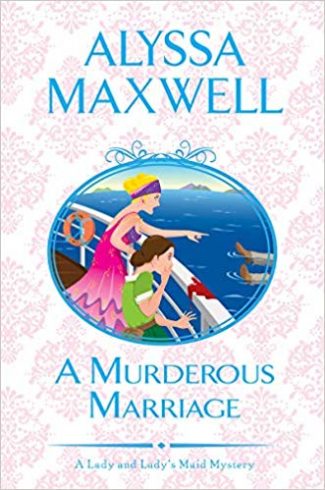 A Lady and Lady’s Maid Mystery #4

A Murderous Marriage is the fourth novel in Alyssa Maxwell’s Lady and Lady’s Maid Mystery Series. Lady Phoebe Renshaw and her lady’s maid, Eva Huntford, are preparing for a wedding, but when an unexpected death occurs, it turns out it may not be the happy occasion everyone had hoped for . . .

A Murderous Marriage doesn’t feature connubial bliss, but it does explore many other facets of love. Like a daughter’s sacrificial love for her family’s wellbeing, sisters’ loyal affection toward their sibling, and a more-than-a-maid’s fierce, protective love for the women she serves.

Lady Julia Renshaw, the eldest grand-daughter of an earl, is about to marry decades older “Gilbert Townsend, a viscount and a wealthy industrialist.” Her formidable gramma tells her, “I had hoped for an earl at the least, perhaps a marquess. But, of course, Gil is a very wealthy viscount. You’ll have a good life, my dear.” They’re to wed in Cowes, on the Isle of Wight, April 1920. Much has changed for the daughters of the aristocracy since the end of the Great War. There are fewer men to marry since many perished on European battlefields. The vicissitudes and aftermath of war have an impact on aristocratic fortunes. The family seat, “Foxwood Hall doesn’t support itself any longer and hasn’t for some time now.” Julia knows it is her duty to marry well.

Her younger sisters don’t hold out high hopes for the success of the impending union. Sixteen-year-old Lady Amelia blurts out to Julia that in a perfect world, Gil, being so much older, will die soon so that Julia can marry the love of her life, Theo, the wounded and disfigured Marquess of Allerton.  Eva Huntford, Lady Phoebe’s lady’s maid (and partner in criminal investigation), watches over the sisters, her protective instincts heightened. She snaps at an eavesdropping waitress to forget anything she might have heard: “If you value your position here or anywhere, you’ll not go telling tales,” and finishes with it is “none of your business.”

Indeed not, and one might argue it was none of Eva’s business, either. But her ladies, her girls, mattered more to her than anything else—more than her own affairs, at least for the present. They needed her, even Julia, the eldest. Sometimes especially Julia. And Eva needed them . . . to be happy.

But happiness proves elusive. After the ceremony, a motor launch transfers the wedding guests to the wedding reception on Gil’s gleaming, magnificent yacht, the Georgiana. The waters of the Solent are choppy and the spring winds are blustery. The Georgiana will also serve as a floating honeymoon hotel. Shockingly, later that night, “Julia pounds on her sister’s door, brandishing a bandaged hand and reporting a hot-tempered outburst on her new husband’s part.” She tells her sisters and Eva that Gil even accused her of being a gold digger.

“So what? Am I the first woman to do such a thing? It would have not have been an empty arrangement. I have—or had—every intention of being a good wife to Gil, of making him happy for as long as . . . well, for the rest of his life.” She treated them all to a defiant look. “I would have given him no cause for complaint.”

As it happens, the quarrel occurred after the nascent marriage was consummated so an annulment isn’t in the cards. Julia pulls herself together: “I made my bed. I must return and lie in it,” and returns to the yacht. Her sisters are so worried that they get up early to say farewell once more before she departs on her honeymoon. The yacht in an uproar: Gil is nowhere to be found. The police are summoned, they search the harbor, and find Lord Annondale.

“Thank heavens for that,” Julia came eagerly to her feet. “Where is he?”

“He was found drifting against the pilings of the main pier at the Royal Yacht Squadron, my lady. Drowned.”

Due to a powerful amount of circumstantial evidence, Julia is arrested for her husband’s murder. It’s time for a lady and her lady’s maid—Lady Phoebe and Eva—to rectify the situation. This is the fourth time they’ve worked together for justice. Not only Julia’s freedom but their noble family’s reputation is on the line. They visit a despondent Julia in jail.

“Oh, Phoebe, you’re always on the alert—you and Eva.” She shook her head sadly. “I don’t deserve your efforts. I’ve been positively swinish toward you these past several years.”

To the two not-so amateur detectives, it doesn’t matter a whit. They know Julia is nobody’s murderer and they are “all too eager to clear Lady Julia’s name.” They’ll follow the road map they’ve used before, thinks Eva.

She and Lady Phoebe had worked well together in the past, with Lady Phoebe poking around among her set—the toffs, as Eva’s father called them—and Eva probing belowstairs.

The real murderer doesn’t stand a chance in face of this indomitable, experienced pair of detectives. “Circumstances call for logic and cool heads,” and that’s exactly what they bring to the sordid, sad mess.

Read an excerpt of Alyssa Maxwell’s A Pinch of Poison.