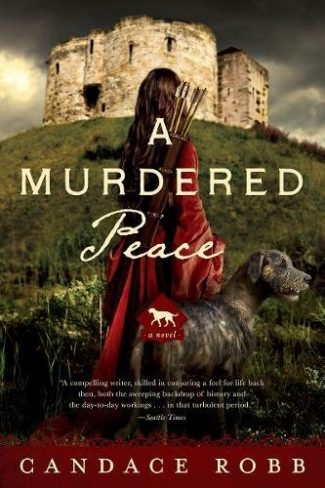 In Candace Robb’s latest entry in the Kate Clifford series, A Murdered Peace (available now!), England still in tumult at the start of the fifteenth century, as Kate finds herself working to prove the innocence of her longtime confidante.

In the Year of the Lord 1400, Henry IV is the English king. Henry deposed Richard II in 1399, leading some citizens to call him Henry the usurper. England suffers under a struggle that is akin to a civil war.

The ancient walled city of York is shrouded under a bleak midwinter landscape.

Snow blanketed the rooftops, softening them, mirroring the pale clouds that vaguely muted the darkness of the predawn sky, the steeples and chimneys reaching out of the ethereal whiteness, calling on heaven to look down at the beauty.

York is suffering the after-effects of the Epiphany Rising, a quixotic attempt to restore Richard II to power. Defeated noblemen and their sympathizers flee to York, desperate to escape from the king’s soldiers. Dame Kate Clifford of York (the heroine of Robb’s third Kate Clifford installment) is affected as well—Lady Margery, an old friend, and the widow of one of King Henry’s foes, asks for sanctuary and Kate’s friend and cook Berend returns, after an inexplicable departure.

She is hardly consoled when Berend reappears, wounded, secretive, denying any connection to the uprising, but refusing to explain himself. When he is accused of brutally murdering a spice seller in the city, Kate discovers a chest of jewels in his possession. Some of the jewels belong to her old friend Lady Margery, wanted by the king for her husband’s part in the uprising.

Unusually for the time, Dame Kate Clifford is an independent woman, a widow who is at no one’s beck and call. After her husband’s death, she inherited his many debts and obligations but rather than re-marry or live under her relatives’ care, Kate methodically works to become debt-free. She’s a parent to her wards and a businesswoman at the helm of various enterprises. Kate owns a guest house that serves a unique purpose, an establishment that “required that their guests be confident their patronage was kept secret.” Secrecy was not necessary when clerics, guests of the chapter of York Minister, stayed, nor when nobles rented rooms. But Griselde, Kate’s manager of the guest house, also caters to the rich of York.

. . . the two bedchambers above the hall were rented to the wealthy of the city for entertaining their mistresses or lovers in discreet luxury. Griselde had perfected the art of discretion, which included preventing guests from encountering one another.

Kate’s assets are her intelligence, her deep knowledge of the nobility of the area, and lastly, her foresight. She sees patterns of behavior—and breaks in the norm—when others do not. Her “network” is extensive, encompassing her childhood connections, the indigent of York, and churchwomen. The homeless and feral children of York miss nothing. It’s like “the walls had ears.” The house of Kate’s colleague, Dame Jocasta, is surveilled by men aligned with King Henry. A young girl spots a man “circling Jocasta Sharp’s house as if trying to find a way in,” trying to eavesdrop on what was happening inside. But he was unsuccessful, as the girl explains to Kate.

“Dame Jocasta’s watchers are not obvious to most folk passing by, but to someone glancing round hoping not to be seen, they find eyes everywhere.”

Kate has a very unusual supporter, her dead brother Geoff, who communicates with her telepathically. When Kate communicates with Lady Margery, who begs her for shelter, she listens cautiously, searching for believability, but Geoff adds an extra level of comprehension. Margery states flatly that her husband was “slain by a mob at Circencester.”

“They butchered him at Henry of Lancaster’s pleasure.” She spoke with a cold precision Kate had never heard from Margery.

Pleasure? Surely not, Geoff whispered in her mind. Her twin, dead now seven years, lived on in Kate, protecting her. Womb companions, nothing, not even death, could separate them.

Kate circles back to the murder of a local spice seller. A learned woman, she asks herself, cui bono? Who benefits from the spice seller’s death? Perhaps in the tempestuous political climate, it’s convenient to see all murders as political. But Kate doesn’t look for easy answers: someone is trying to frame her closest associates. Berend sums up the desperately sad climate in York when Kate ruefully admits that not only her ward Petra misses him, but that she does too. Like many who live in a turbulent time, Kate and Petra want “everything to be as it was.” Alas, that isn’t possible, says Berend.

“The royal cousins have murdered peace.” He raised his head, rubbing his eyes as if that might revive him. Or had there been tears? No, his eyes were steady as he gazed on her with the saddest countenance. “Wrestling the crown from Richard was the worst thing Henry might have done for the realm. With the uprising—He cannot allow Richard to live. So now he not only plucked the crown from the anointed king but he will have his blood.”

Kate Clifford looks at the world through realistic but not jaundiced eyes. She notices details that others miss, and these miniscule facts add up. Constantly asking herself who is an ally, she still manages to be compassionate. Kate walks a very fine line between protecting her employee Berend and her friend Lady Margery, without running afoul of Sir Elric, a soldier with “the powerful backing of the Earl of Westmoreland,” who has helped her in the past. Kate’s stalwart independence makes it difficult for her to trust or confide in anyone, even the loyal and sensitive Sir Elric.

A Murdered Peace is an absorbing addition to Robb’s Kate Clifford series: it serves up timeless issues in a fascinating medieval setting.