Book Review: A House of Ghosts by W. C. Ryan 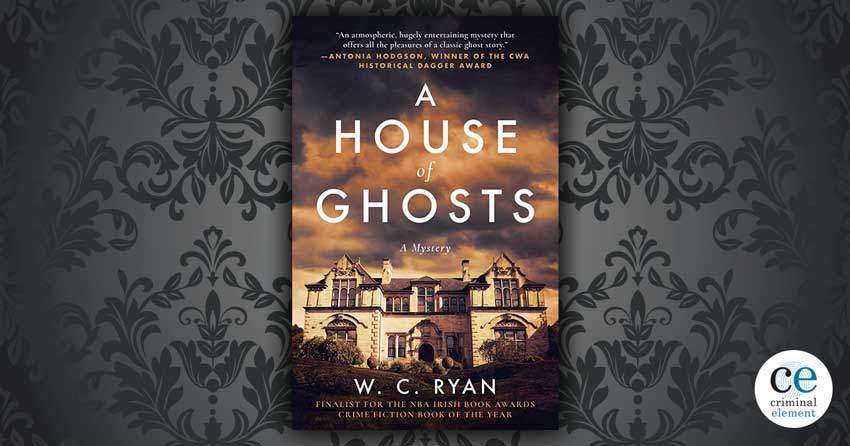 A House of Ghosts by W. C. Ryan is an unrelenting, gripping mystery set during World War I that seamlessly mixes genres and is packed with twists and turns and a kindling of romance.

In the winter of 1917, as the First World War rages on, a most unusual house party converges on Blackwater Abbey off the Devon coast.

The house, he had to admit, had a strange atmosphere—one that made him uneasy. There was something he had noticed. A kind of distortion. He’d become aware of it first in his room, the sensation that sound and light seemed to stretch and bend somehow. It wasn’t quite an echo, but there was some variation in how one might expect a sound to behave and how it actually did that was not easily accounted for. And there was something too about the way the light moved that had a similar effect. Perhaps there was something to this ghost business.

At the far end of the corridor a door opened and he saw Amy, Evelyn’s maid, come out carrying a white linen bag. As if to prove his point, the sound of her footsteps as she descended to the kitchen was louder than it should be, seeming to come from much closer than it actually was. And then there was a shift, and for an instant it felt as though the noise was coming from behind him. The illusion was so pronounced that he turned and, to his surprise, there was someone standing there.

Someone who shouldn’t be there. Who should be in a tunnel in France. Dead.

The host, Lord Highmount, made his fortune on armaments—weapons and munitions that may have been directly responsible for the deaths of his own sons. His grief-stricken wife has turned to spiritualists and plans to hold a séance to contact their slain sons.

Joining the mediums, psychics, and doctors at this ghostly party are Kate Cartwright—a young woman with her own supernatural gifts and personal loss to grieve, a longtime friend of the family who now works in a code-breaking office—and the mysterious Donovan, a dangerous man well-versed in espionage.

The two are attending at the behest of their superior, C, who wants them to get to the bottom of a very real-world, but no less horrific, mystery. Someone has been leaking Highmount’s designs to the enemy.

Could it be the Lord himself, double-dealing for profit? Kate’s erstwhile fiancé, Captain Miller-White, is a cad and scoundrel—but could he be a traitor too? Or perhaps the eccentric, continental mediums Madame Feda and Count Orlov are using Spiritualism as a cover for earthly spying?

Whether or not the séance is genuine, Kate and Donovan have to catch the culprit before the consequences are too dear for the entire nation.

Things quickly complicate when two of the party are struck down during a raging snowstorm that cuts off all contact with the shore. Donovan and Kate quickly realize that everyone has a reason to want Lord Highmount dead, as buried secrets are uncovered.

Donovan shook his head. “Is this how people like the Highmounts normally arrange their entertainments? By inviting everyone who might want to kill them to stay for the weekend?”

Kate laughed. “It is probably more common than you might think,” she said.

A House of Ghosts is a throwback in the best of ways. Ryan uses tropes and framework made classic by the likes of Christie and Sayers to craft a cunning, many-tiered story that, paradoxically, feels both fresh and familiar. This is a ghostly big house mystery that’s cozy and invigorating.

So much is packed into the pages: spies and spirits and secret passages and séances, oh my! Want gothic chills? Ryan delivers them. Like to watch sparks fly between clever, staunch investigators? Kate and Donovan are a supremely satisfying pair.

The titular mansion is eerie. The historical details are sharp. The commentary on the mechanics and economics of warfare is biting.

“War takes on a momentum of its own, Kate. It has its own intelligence, perhaps even genius. If it weren’t for this war, would we even have considered some of the weapons we now take for granted? I doubt it. War is a great accelerant to invention—especially when there is a military application. Of course, it is also a time when our worst instincts are indulged.”

There’s no wasted space; each chapter serves a purpose, expanding the cast, mystery, and atmosphere. Ryan manages a perfect balance between pragmatic reality and spooky fantasy through sharp dialogue and strong character work.

There are tension and twists galore, delivered in fast-paced, short chapters that encourage binge reading. A House of Ghosts is a book you could easily devour in a single sitting, though I found myself deliberately drawing it out to prolong the experience.

It’s not often you find such a well-written story that’s a perfect blend of genres. With its supernatural flourishes, Ghosts is ideal for fans of Simone St. James and Wendy Webb—just the thing to curl up with on a chilly fall night surrounded by candles.

I don’t say this lightly: A House of Ghosts is one of the best books I’ve read this year. It ends with a suggestion that there may be room for more to come, and I sincerely hope we see a sequel someday; until then, I’ll be diving into Ryan’s previous works ASAP.