Book Review: A Glimmer of Death by Valerie Wilson Wesley

February 3, 2021
First in a thrilling new mystery series set in New Jersey, A Glimmer of Death features a multicultural cast and stars a caterer-turned-realtor with the gift of second sight... 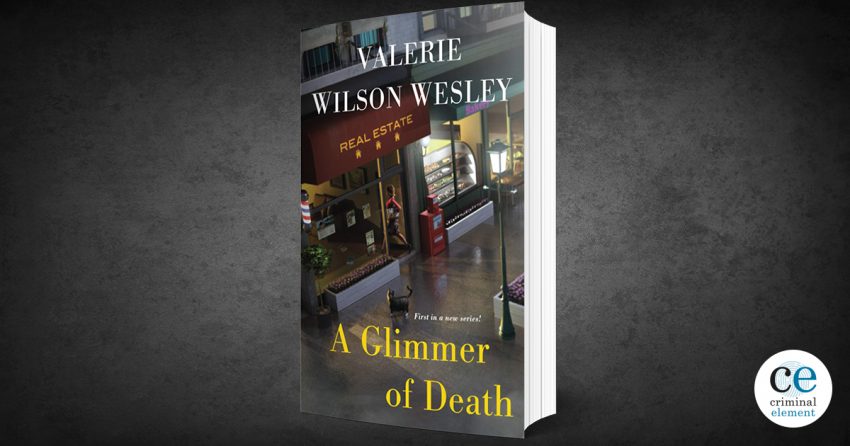 A Glimmer of Death is delightful new mystery from Valerie Wilson Wesley. The word glimmer references the aura some folks give off to recent widow Odessa (Dessa) Jones. Sometimes it’s a whiff of a smell or a color or mist that surrounds a person. Dessa is an empath who has inherited a wide array of psychic gifts, like most of her relatives.

Dessa self-deprecatingly describes herself as a “woman in her early forties patiently waiting her turn in a beauty salon or checkout line.” Her kind, round face gives her a familial nature. Safe to be said, she’s approachable. But even reluctant psychics struggle when the cliché life comes at you fast comes to pass, confirming Dessa’s ability to sense when bad things are coming.

The office reeked of nutmeg. It tickled my nose, filled my mouth, forcing its way down my throat. Funny thing about nutmeg. A dash can spice up cocoa; too much can make you sick. Determined to ignore it, I focused on the real estate listings in front of me. Yet the smell wouldn’t leave. I closed my eyes, trying to block this pain-in-the-neck, useless sixth sense, but it did no good. To me, Odessa Jones, nutmeg means death.

Unlike her psychically gifted relatives, Dessa doesn’t feel that second sight is much of a gift. It hasn’t helped her for most of her life. Without her beloved husband Darryl by her side, Dessa can’t make a success of D&D Delights, their catering business—she’s too depressed to cook. Recent widows are often told not to make any big changes but faced with the possibility of losing her home, Dessa joins a local real estate firm.

Risko Realty was a cut-rate real estate agency in Grovesville, an aging New Jersey town stuck between struggling Clifftown and affluent Bren Bridge, a once-upon-a-time “sundown town” that folks like me still avoided when the sun set.

Grovesville, Clifftown, and Bren Bridge are fictional New Jersey towns, but Valerie Wilson Wesley gives us a hint by saying that some townspeople “considered it a brief stop toward a brighter destination—Manhattan was just two train stops away.” Grovesville isn’t a particularly affluent community, but Dessa, who always gives people the benefit of the doubt, be they co-workers, neighbors, or relatives, makes Grovesville seem like a friendly place. Dessa finds something to like about the men and women she works beside. Their individuality and humanity shines forth in brief sketches. Bertie lives for online bargains and gleefully displays her new hot-pink leather gloves. Harley has a bike he loves unreservedly and he is always toting two large lattes, one for him and one for Dessa. Vinton is a short and wiry man, a decade or so older than Dessa, and is “surrounded by one of Aunt Phoenix’s glimmers—mouse gray—as if it were inspired by his clothes and being.” Even given her easy-going nature, Dessa draws the line at her thoroughly unpleasant boss, Charlie Risko. With an ugly sense of humor, Dessa describes him as being “as unpredictable as he was spiteful.”  He motivates unproductive employees by giving them pep talks in the office, talks punctuated by threats to fire them if they don’t make him some money. He even threatens to brandish his gun.

“So are we on the same page here, Mrs. Dessa Jones?

If he was expecting a response, he didn’t get it. I was too busy staring at the oaken beam just above his head. The nutmeg smell was coming from there; there was no mistaking it. Startled, he followed my gaze then shivered like a wet towel had been slapped across the back of his neck.

The smell of nutmeg doesn’t lie. Charlie is shot to death in his office and after interviewing everyone, the police arrest Harley because his fingerprints are found on Charlie’s gun. Dessa doesn’t believe Harley is a murderer. Frankly, so many people wanted Charlie dead, the police could take-a-number and arrest anyone of his employees, let alone the young wife who he abused and tormented. To save Harley from being railroaded into jail, Dessa harnesses her neglected psychic skills to figure who murdered Charlie.

Valerie Wilson Wesley’s new mystery series introduces us to a circle of friends and family that promise to play a future part. Everyone will fall for Aunt Phoenix, always in Dessa’s corner.

When the phone rang, I knew who it was but answered anyway.

“I know it’s been a bad day, Odessa, but put down that wine. Best get yourself a flash of brandy to take the edge off . . . troubling times.” Aunt Phoenix’s gravelly voice was surprisingly comforting. “It’s curry for me. Strong curry. More powerful that nutmeg, so consider yourself lucky.” I didn’t bother to ask my aunt how she knew what was going on or what I was drinking.

Aunt Phoenix is practical, too. She is well known for her ability to predict winning lotto numbers and she’s always trying to get Dessa to play the numbers she gives her. Dessa also relies on the advice of Lennox Royal, the owner of Royal’s Regal Barbecue. He’s a retired police detective who points her in the direction of Charlie’s wife, saying that most of the time the spouse has something to do with it. I look forward to more Aunt Phoenix and Lennox Royal in the next Odessa Jones mystery.

While stepping up to figure out who killed her boss, Dessa embraces elements of her personality that have been in abeyance for a time. We learn what comforts her, like her feisty feline Juniper. She rediscovers her love of baking and uses baked goods as the wedge in the door that gets folks talking. I defy anyone to resist a piece of Dessa’s signature dish, a classic pound cake punched up with 7UP. Bring on more Dessa Jones, an unusual detective with a winning personality.