March 29, 2022
In A Fatal Overture, Kathleen Marple Kalb's third historical mystery in the Ella Jane series, Ella must juggle her engagement to British duke, Gil, and the discovery of a dead man in their bathtub. 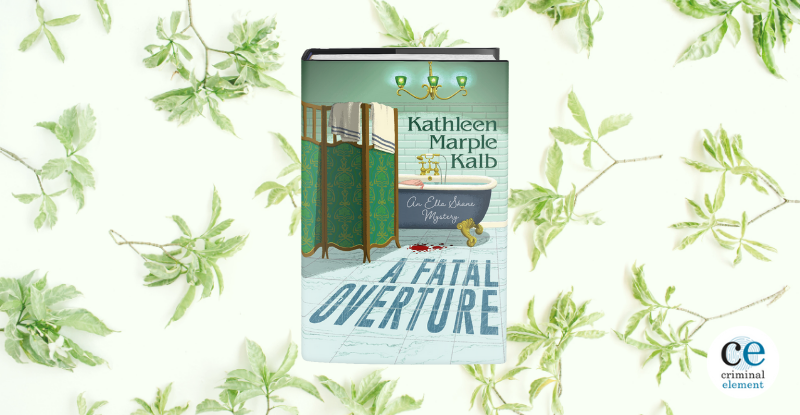 New York City, 1900. Ella and Gil are a mismatched couple—not quite equivalent to The Prince and the Showgirl—but a pair with not a lot in common. Widower Gil Saint Auburn is a British duke and Ella Shane is an American mezzo-soprano with an avid following. She’s also part-owner of a theater company.  A Fatal Overture is the 3rd Ella Shane historical mystery. It’s set in the Gilded Age, a time-period celebrated in the hit HBO Max show of the same name.  Gil and Ella met in A Fatal Finale: Gil came to New York to investigate the untimely death of his cousin, a member of Ella’s company singing under a pseudonym.  Although Ella is attracted to Gil, she is committed to her career and leads a chaste, business-like existence. The man she shares her house with is her protective cousin Tommy. As the most celebrated “trouser diva” of her time, Ella is courted constantly but she is not interested in being an ornament on a rich man’s arm. Author Kathleen Marple Kalb sheds light on why a trouser diva might sparkle in a Gilded Age mystery.

A beautiful woman with a glorious voice, dressed in well-fitted breeches dueling the villain between arias. It sounds like a Gilded Age gentleman’s opera fantasy, but it’s really a dream come true for a mystery writer looking for a unique idea. Best of all, it’s based on reality.

Gil is back in New York City, with his mother and her two sisters following closely on his heels. He wants a life with his beloved mezzo-soprano and his interfering family decide to put their oar in as well. The ladies check into the “elegant Waverly Place Hotel” but their time there is short. Unfortunately, they come face to face with a dead man in their bathtub! Ella and Gil are no strangers to murder but frankly, the investigation they undertake diverts them from their burgeoning romance.

Happily Ella becomes engaged to her ducal suitor and the heat level ratchets up. In a suitably proper way of course.

He smiled. “Now give me a goodnight kiss and get to sleep. Mother and her sisters will lead you a merry dance tomorrow.”

“Good night, my love.” The endearment felt strange, but good.

Off goes the duke and in comes her cousin Tommy.  There are so many busy-bodies in A Fatal Overture, all with an opinion.

“Well done, Heller.” He had, of course, heard everything.

“We still have to settle the contract.”

It’s not often you read about a murder mystery that has a parallel plot of a couple tussling over a pre-nuptial agreement. How modern but not at all uncommon when an aristocrat marries. Gil’s mother, the Dowager Countess, describes Ella as “a poor orphan girl,” but although she may be the orphaned daughter of a Jewish man and an Irish woman, there’s more to her than her past. To be fair to Gil’s mother, she appreciates the idea of an infusion into Gil’s blue bloodline of “fine, hardworking, American stock, and good Jewish common sense besides.” It’s not an easy discussion.

“I am a singer, the leading artist in my own company. However much I may want to marry a man, I cannot just leave the career and life I have built.”

“He hasn’t been fool enough to ask you to give up everything for him.”

Back to the murder. What might possibly lay behind it? Who is “the bounder who got himself stabbed in the eye?” Could there be a connection between his death and the inexplicable disappearances and deaths of maid servants? On a parallel track, Connor Coughlan, an old friend of Ella’s (and erstwhile “kingpin of the City’s most dangerous neighborhood) brings up the topic of domestic service agencies. Ella has an intrepid reporter friend, Hetty, who is “poking about.” Readers met Hetty in A Fatal First Night, the 2nd Ella Shane mystery. Connor doesn’t pooh poo Hetty’s investigative journalism but he sounds a note of caution.

“That’s fine, as far as it goes, but a couple of them are run by some very bad people.”

For Connor to describe someone as very bad people meant they were likely the incarnation of Satan on earth. Or at least someone who could be extremely dangerous to Hetty. “What kind of bad people?”

“The kind who find other uses for the prettiest and youngest girls who come looking for work while running a perfectly legitimate agency for the rest.”

I didn’t know the exact details of those other uses, but I knew they had to be both horrific and lucrative. And that anyone involved in such things would not scruple to make a lady reporter disappear if she looked too closely into their business. “Oh, dear.”

Connor’s insider information puts Ella in a difficult spot. On the one hand, she doesn’t want her friend harmed. But on the other, as she says to Connor, “It’s wrong, and it should be stopped.” Ella Shane is a proponent of women fulfilling their destinies, even if it leads them into harm’s way. A famous quote from Sigmund Freud sums up the tension that threads through A Fatal Overture: “Love and work are the cornerstones of our humanness.” Ella’s artistic work sustains her and brings her personal satisfaction but a life with Gil is equally important. If they can solve mysteries along the way, so much the better. The officially engaged couple, “with all the public approval and private privileges that implied,” decamp to London. Undoubtedly readers will eagerly await the next Ella Shane mystery, especially as it will take place in a foreign land.