July 1, 2021
In the follow up to the critically acclaimed The Mountains Wild, Detective Maggie D'arcy tackles another intricate case that bridges Long Island and Ireland in A Distant Grave. 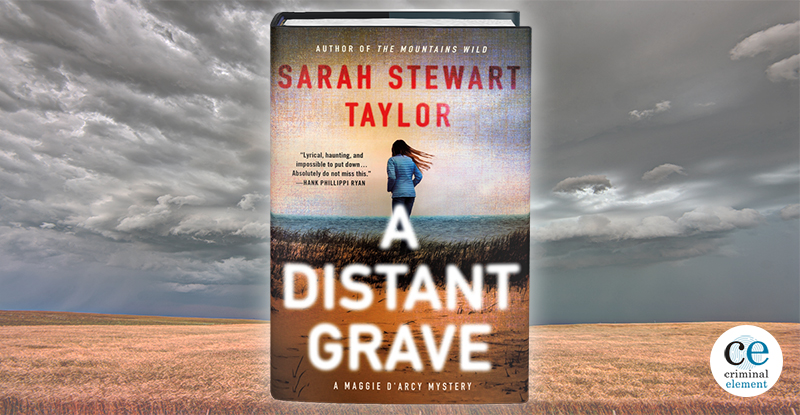 The aftermath of events described in Sarah Stewart Taylor’s 2020 “critically acclaimed The Mountains Wild,” have complicated Long Island detective Maggie D’arcy’s life. Her relationship with her teenage daughter Lilly is quite fraught. Maggie’s boyfriend lives in Dublin and while every long-distance relationship has problems, she’s not sure there’s a long-term future with Conor. Jay Cooney, Maggie’s boss, doesn’t respect her detecting abilities. When she pushes to reopen a long-ago case, he accuses her of risking “the good reputation of this office in order to satisfy some personal grudge.” It’s personal between them Maggie’s colleague Marty making an uncomfortable man in the middle.

Marty looks right at Cooney and says, “She’s not a child to be managed, Jay. She’s a lieutenant on the homicide squad and she has every right to lodge a complaint about a case. But I think she’s done that, so we’ll be going now. Thank you for your time. We appreciate you being willing to hear us out.”

The us makes my throat seize up. Marty didn’t want to do this. I had to convince him to ask for the meeting. He must have known it was going to go like this. But he did it for me.

A Distant Grave’s portrait of a harried working mother rings true because whether it’s her professional or personal life, Maggie often feels like she’s letting someone down.

The story opens where “the expanse of the Great South Bay lapped the rocks.” A man stands on the Long Island shore, waiting to meet up with someone who doesn’t come. He reminisces about the many countries where he had worked—from “humid jungles” to dry deserts: “When he got home, he always went for a walk by the sea first thing, to remind himself that he was free.” He waits and waits before he returns to the parking lot. He gets a premonition that someone is out there, stalking him, and somehow, is not surprised.

Of course. Of course death would look like this. It made perfect sense, as logical as the conclusion of a well-told tale. Of course this was it.

And it was then that the bullet found him, so quickly that when he died, he was still thinking of stories, and endings, and of the sea, the sound of it, how it filled your head so you couldn’t think of any other thing.

Marty and Maggie are assigned to the case. It’s not easy for Maggie to see a dead body on the beach. Marty knows it’s a trigger—like explosions are for him. Something strikes her as odd though.

“I’m okay,” I say, though I’m not really. I take a deep breath. “I was just thinking how odd it is, to not be able to identify someone right away. No phone, no wallet. It’s like he fell out of the sky, you know?”

The mystery surrounding the dead man’s origins is a subtle bit of foreshadowing. Based on his underwear (Marks and Spencer, a British brand) and the rental agreement in an abandoned car, he’s identified as Michael Treacy from Dublin. Treacy’s back is covered with deep scars, marks of him being tortured in his past. With this case dropped in her lap, Maggie worries that she’ll have to cancel her long-planned trip to Dublin to see her boyfriend Conor: “We’ve been trying to tend it long distance but we need the two weeks to figure out what our next steps are, to let Lilly and Conor’s son Adrien, get to know us and each other.” It doesn’t take an Irish seer to see where this is going, can anyone say, “a busman’s holiday?” Maggie calls Roly Byrne, an Irish colleague, to fill him in.

He answers fast, with a booming, “D’arcy! How are you, then?”

“Good, except I’ve got an Irish guy who got himself shot on a beach here last night. He’s from Dublin. Arrived three days ago. We’ve got the passport and everything. Someone’s going to have to notify the family. I believe that someone may be you.” Roly works for the Garda Síochána, the Irish police service.

Roly asks the obvious: “This case gonna banjax your holiday?” He gets it: “he knows what it’s like to want to see the case through and at the same time not want to let his family down.” Her presence in Dublin is too good to pass up—Marty gives her the green light, saying, “Might be good for you to do some poking around over there.” So much for a carefree, relationship-deepening holiday. She passes the baton to Dave and his team, reminding them she’s “just a phone call away.” Dave walks her to her car, assuring her he has a “feeling” she’ll be able to sort out why Treacy came to Long Island once she’s in Ireland.

I’ll think about that later, Dave’s feeling, and wonder if it really was a feeling about the case, or it he was bullshitting me to get me to go to Dublin. If it was a feeling, I’ll always wonder if he got it from me, if I knew something then that was hidden even from myself, that was there all along but I just couldn’t see it.

So much good detective work leads from hunches and suppositions. Maggie D’arcy is almost fey in her ability to see past the obvious. Michael Treacy spent his life working aboard for a “humanitarian aid nonprofit,” so why was he executed on a Long Island beach, in the shadow of “fancy waterfront houses?” Coincidentally, Cooney lives in that wealthy Manorhaven neighborhood. N.B. There are few coincidences in A Distant Grave. There’s a strong connection between Long Island and Ireland: it’s the “ninth-most Irish city area in the country.” Maggie’s holiday is anything but: “the strands of the mystery lead Maggie to a quiet village in rural County Clare and back to her home turf.”  Someone(s) is determined to keep Maggie and her colleagues in Dublin and Long Island from uncovering the truth—if they are all trustworthy, that is. In A Distant Grave, Maggie’s professional ambitions vie with her desire for personal happiness: perhaps the next Maggie D’arcy mystery will explore that further.  This is an absorbing book: it’s a terrific follow-up to The Mountains Wild.