Book Review: A Deadly Inside Scoop by Abby Collette

May 14, 2020
With A Deadly Inside Scoop, Abby Collette kicks off a charming cozy mystery series set in an ice cream shop—with a fabulous cast of quirky characters. 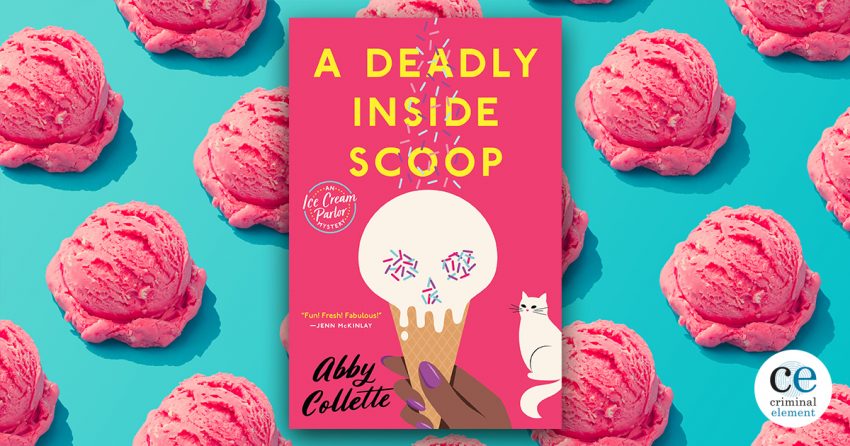 The Own Voices debut novel of Abby Collette’s Ice Cream Parlor mystery series is a breath of fresh air, featuring an African-American store owner who’s reluctantly drawn into solving a murder mystery after she discovers a dead body. Bronwyn “Win” Crewse moved home to Chagrin Falls, just outside Cleveland, Ohio, after a health scare reminded her how much she preferred living in her hometown to pursuing her otherwise successful marketing career in New York City. Now she’s taken over running the family ice cream parlor, Crewse Creamery, with a vision towards restoring it to its former glory while making innovations of her own.

Unfortunately, the glorious summer debut she was planning gets derailed by delay after delay. While an October opening isn’t the worst thing in the world, the first snow of the year falling on the exact same date really puts a damper on the occasion, with exactly zero customers walking into the store. As if that wasn’t bad enough, she literally stumbles over a corpse that very night.

After reporting the find and answering questions from the police, all Win wants to do is put this disastrous day behind her, and focus on drawing in customers and making a success of the creamery. Her best friend, Maisie Solomon, however, is addicted to British television mysteries and is thus somewhat disappointed that Win isn’t at all curious about unraveling what happened. But then Win’s father becomes prime suspect, as the victim was a man with a long and complicated history with the Crewse family. Win feels that she has to do something to clear her dad’s name, and not knowing who else to consult, turns to Maisie for advice:

“You really want to be an amateur sleuth?”

I was sure I hadn’t given her any reason to think that I’d watch it. I wanted to dissuade her from [investigating]. Now, I thought, her having some knowledge about sleuthing might come in handy.

“Or Vera,” she was rattling on, “but she doesn’t really count because it’s her job. Oh, but like Rosemary & Thyme.” She giggled. “It’s spelled like the herbs. That could be us.”

The banter between Win and Maisie, along with their other best friend, Riya Amacarelli, is one of the highlights of this entertaining novel, as is Win’s relationship with her delightful family, especially her grandfather, PopPop. The way they all come together to clear her father’s name and bring the real killer to justice was an enjoyable ride from start to finish. I also enjoyed the smidges of romance sprinkled over this culinary cozy confection. It’s refreshing to see a heroine who’s far more lukewarm about her own romantic prospects than her immediate circle is, even as I think that O makes for a very promising suitor.

The greatest highlight of this novel for me, however, was the absolutely delectable dessert descriptions. It constantly surprises my family and friends that ice cream is one of those foods I can either take or leave. After reading passages like these, however, I challenge anyone not to develop a craving:

PopPop wanted me to serve Grandma Kay’s chocolate cherry and almond ice cream cake. It was luscious, with sliced, frosty dark cherries covering the top and slivers of almonds sprinkled about. Inside were alternate layers of chocolate crumble, thinly sliced vanilla cake and a smooth cherry ice cream made from puree and almond extract. A short-stacked cake, one spoonful filled the palate with tangy and sweet, smooth and crunchy, rich and salty all at the same time. It was elegant and sophisticated and probably the best fit for the occasion.

A Deadly Inside Scoop also includes four recipes for ice cream, and even though I write a cooking column for this site, my culinary talents do not extend towards that frozen dessert, alas! The four recipes are all of different flavors mentioned in the book and look really delicious, though I’m happy to content myself with store-bought for now. I’d highly recommend having a bowl of ice cream to hand when reading this novel, as you’ll definitely want a frozen treat when you’re done with it, if not sooner!