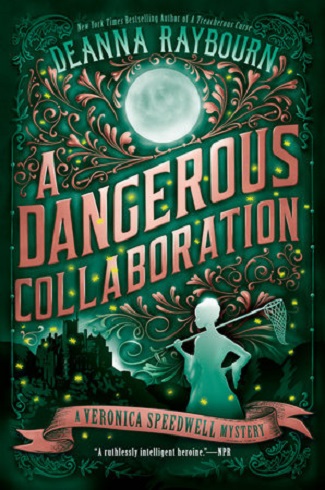 A Dangerous Collaboration, the fourth installment of Deanna Raybourn’s Veronica Speedwell Mysteries, has everything a mystery reader could want: a spooky castle on a shadowy isle, a missing bride, and a murderer.

In their fourth outing, A Dangerous Collaboration by Deanna Raybourn, Veronica (the semi-legitimate daughter of the Prince of Wales) and Stoker (aka the Honourable Revelstoke Templeton-Vane, third son of the sixth Viscount Templeton-Vane) get embroiled in a murder mystery in the far reaches of Cornwall.

It is set in London, March 1888, and as the book opens Veronica announces to Stoker that she is off to Madeira with Lady Caroline, sister to their employer, The Earl of Rosemorran. Taken by outraged astonishment, Stoker asks if “one might inquire as to the expected duration of this expedition?”

“One might,” Veronica replies “but one would be disappointed with the reply. I have not yet formulated my plans, but expect to be away for some months. Perhaps until the autumn.”

Stoker is thrown for a loop, but Veronica has promised Lady Caroline to be at her side during a difficult time and for herself, she needs some distance from the “powerful emotions” Stoker has stirred in her.

Although they banter like Nick and Nora Charles of The Thin Man novel and movies, their chemistry is more like that of Sam and Diane from Cheers. They bicker, they flirt, they start to become aware of their less than platonic feelings for one another. Veronica muses that she and Stoker “were solitary creatures” but they “had discovered a mutual understanding beyond anything we had shared with others. What would become of it, I could not say. In spite of six month’s distance, I still thought often of that last significant meeting, when words had hung unspoken but understood in the air. I had alternately cursed and congratulated myself on my narrow escape from possible domesticity—a fate I regarded as less desirable than a lengthy bout of bubonic plague.” Veronica thinks that “Stoker was the only man I knew who could have weakened my resolve, but it would have been a mistake, I insisted to myself. I was not made for a life of ordinary pursuits, and it would take an extraordinary man to live with me on my terms.” We shall see how long Veronica’s resolve holds.

Veronica is home from Madeira for just a few short days when Stoker’s brother, Viscount Templeton-Vane, whisks her off to St. Maddern, a remote island off the tip of Cornwall, to a possibly haunted castle. He has promised her the larvae of an elusive rare butterfly and all she must do is accompany him and, um, well, pose as his fiancée.

Stoker’s concern is that his brother Tiberius, the Viscount, means to seduce Victoria.

“Of course he does” [Victoria] agrees.

He stopped and fixed me with a disbelieving stare. “You know that?”

I sighed. “Stoker, I am twenty-six years of age. I have traveled around the world three times, and I have met scores of men, some of whom I have known far more intimately than you can imagine. I promise you, I can smell a burgeoning seduction from across the room. I am no fainting virgin,” she reminds him.

“Then why in the name of bleeding Jesus are you going with him.”

“And that is all it takes? Bought with a butterfly?” He said in a particularly harsh tone.

“Oooh, how nasty you can be when you are sulking” she observed.

Avid Lepidopterist that she is, Veronica can’t resist. Just as the train is about to leave the station, Stoker appears ready to tag along.

On the train journey, the Viscount mentions that Lord Romilly is a dear longtime friend and that a few years ago, Lord Romilly’s wife disappeared and the island gathering is a secret mission to discover what happened to Rosamund.

But it is not just a simple case of murder. Everyone invited to Romilly’s home has a connection to his wife Rosamund who disappeared three years ago on their wedding night. Romilly is determined to find her killer. Viscount Templeton-Vane has his own reasons for wanting to find the culprit. What those reasons are remain a mystery for much of the novel.

As they get to the castle, they find priest holes and hidden hallways enough to make the atmosphere vividly spooky. There will be seances, ghosts, a garden filled with beautiful but poisonous plants, and a murderer. However, this time away also gives Veronica and Stoker some alone time although the ghostly memory of Stoker’s ex-wife Caroline de Morgan still bedevils the budding relationship between Stoker and Veronica.

We have both of us, acknowledged that our bond is unlike any we have shared with another on this earth. This friendship, this strange alchemy that knits us together, it is too fine a thing to let it be tarnished with whatever corrosion [Caroline] has left behind. I think there can be nothing more between us until and unless all ghosts from the past have been exorcised.

When they focus on the murder, signs point to Rosamund’s having never left the island. Her tattered traveling bag is found in one of the hidden hallways. Guests are being poisoned; a harpsichord is playing unnerving music on its own. The scene lacks only Mrs. Danvers.

As they close in on the culprit, The Viscount, Stoker, and Veronica find themselves in danger. Without drastic action, they might all perish. Even at this perilous time, the brothers argue. The Viscount and Stoker have long been at odds over Veronica. The Viscounts says to Stoker, “She deserves better than you, you bloody fool. She deserves a man who would kill for her.”

Although Raybourn does not exactly follow the Twenty Rules of Detective Fiction as laid out by Philo Vance author S.S. Van Dine, readers will love this book. And if you are not already a fan of the series, you will be.