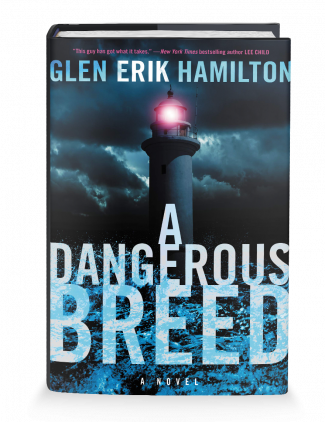 In Glen Erik Hamilton’s fifth book in the Van Shaw series, Van Shaw’s past and present collide when an ingenious blackmailer pushes him to the brink.

In 2015, Seattle native Glen Erik Hamilton burst onto the literary scene with a juggernaut of a thriller titled Past Crimes. That novel won the Anthony, Macavity, and Strand Magazine Critics awards for Best First Novel, and was also nominated for the Edgar, Barry, and Nero awards. It featured an immediately likeable and unique character named Van Shaw. Van was an Army Ranger who grew up in an environment that would have probably seen him enjoying a life of crime rather than one of discipline and law-and-order that the military provided him.

Because of his upbringing, Van had no issues with dealing with the criminal underground. In fact, he could slip into that world with ease which came in very handy for the situations Van found himself in. The first four novels in this series saw Van Shaw palling around more with hoodlum friends than with any ex-military colleagues. Now, Hamilton gives us the fifth novel in the Van Shaw series titled A Dangerous Breed. This novel is quite different from the others that preceded it in that it deals more with Van revisiting his own past as well as standing up for his friends when they get in over their heads.

Van’s mother, Moira Shaw, was a person he never really got a chance to know. He also never knew who his biological father was. The Prologue of the novel describes an almost dreamlike sequence that sees a much younger Van handcuffed in an automobile that was about to plunge into Seattle’s Puget Sound. There was also a man laying across his legs in the backseat of this car and as far as Van could remember, this man was his father.

That trip into the past sets the tone for a novel that is all about family, close relationships, and how the ties that bind us to our family and friends come before anything else, without question. When Van returns to the home that he used to share with his grandfather, Dono, memories come flooding back. When his friend from down the block, Addy, hands Van a stack of mail (yes, mail was still being delivered to this empty home) he comes across some addressed to Moira Shaw.

Moira had been dead for a long-time, but obviously her high school did not know this as she received an invitation for their 30th reunion. All of this touring down memory lane makes Van dig around the house and he finds some information with his mother’s stuff that seems to point him in the direction of his biological father. This is a big part of this novel and I will leave you there rather than spoiling any of the surprises for you. The other main story-line involves Van helping out a friend in need.

His good friend Hollis is in a sticky situation with a really bad man. While helping Hollis out, Van finds himself in the presence of this man — Bilal Nath (doesn’t that just sound like a bad name?). Bilal is in need of something and he would like Hollis’s friend Van to get it for him. What he wants is inside the building that houses a company called Ceres Biotechnologies. As Van makes his plan to do this ‘favor’, he also digs a little deeper into what Ceres Biotechnologies is all about. It looks to Van like Bilal Nath might be a domestic terrorist, and this is not something he wants to get involved with.

Along with the help of friends Hollis, Big Will Willard, and Willard’s very resourceful young niece, Elana, Van seeks to turn the tables on Bilal without alerting him that he is not going to fulfill the job Bilal needed him to do. Things get really sketchy as they walk the thin line between life and death at the hands of Bilal Nath and it will take all of Van’s expertise and the resources of his small group of friends to come out of this alive while possibly preventing an act of terrorism on American soil. A Dangerous Breed is a good read and will definitely appeal to readers who have been with the series since Past Crimes.