February 25, 2022
The fifth entry in the charming Rosalind Thorne Mystery series, finds Rosalinda once again helping ladies of quality navigate the most delicate problems of high society—including who among the ton is capable of murder... 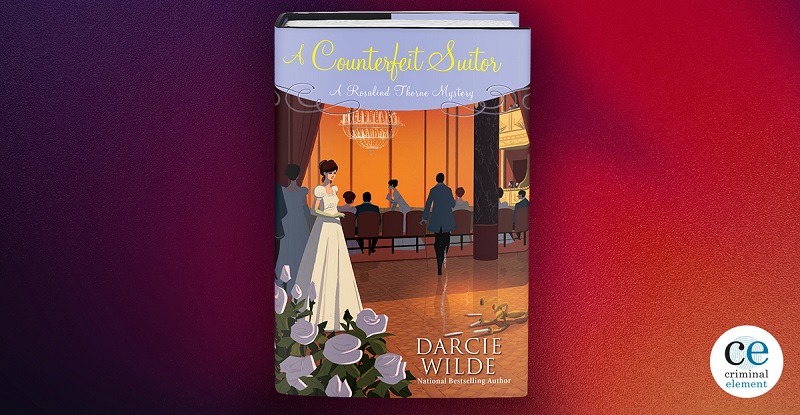 Rosalind Thorne is a fixer. Self-effacing, well-connected, inventive, and persistent, she is a highly sought-after woman within the ton. She is respected for her ability to smooth over awkward social situations and discover the truth behind incipient scandals, thus preserving a person’s social reputation. Her clients are ladies of quality, women whose lives are confined, unlike the choices made by their husbands, sons, fathers, and brothers. Regency England’s high society was so insular that it was paramount that whispers and rumors be quickly crushed lest a family be given a social death sentence.

A widow, Mrs. Walford of Manchester, has need of Rosalind’s good offices. The Walford family is in London for the season. Rosalind explains it all to her housemate and friend Alice, noting that Mrs. Gregory recommended her to Mrs. Walford. In this milieu, it’s all about who you know.

Mrs. Walford said she wanted to give a charity ball to raise money for the widows and orphans of the late wars, before the ton scatters for Christmas.

“Was for someone to look into the background of a young man her daughter had met,” said Rosalind. “Mr. Horatio Salter.”

Is Horatio Salter a worthy supplicant for the hand of Miss Augustina Walford, an heiress with a respectable portion? Because the Walfords are from Manchester, they don’t have an entrée into society that would allow them to investigate Mr. Salter’s bona fides on their own, leaving them vulnerable to fortune hunters. Her research on Salter has uncovered some disturbing information: he was part of the 1814 stock fraud. A rumor spread from a coffeehouse that Napoleon was dead. Based on that news, many people invested heavily in stocks, ultimately costing the public millions of pounds. Although Salter was an insignificant actor in the fraud, he did disseminate the fraudulent tale. Alice thinks it’s cut and dried—he’s a fraud in search of a fortune and Mrs. Walford correctly smelled a rat. Rosalind has him pinned dead to rights. What’s the problem?

“I don’t know,” Rosalind sighed. “It’s something about Miss Walford herself. She shows all the signs of being attached to Mr. Salter, but there’s a way she looks at him, and at me sometimes, like she’s suspicious.”

“Could she have guessed that you’re checking up on her fiancé? If my mother did any such thing, I would have been furious!”

Rosalind has family problems that impede her ability to focus on the Walfords. Rosalind works for a living because her unscrupulous father, Sir Reginald Thorne, squandered the family fortune. He recently escaped from Bath where Rosalind’s sister Charlotte paid for him to be incarcerated in a small house, with a keeper who kept him placated with enough alcohol to somewhat satisfy him. Sir Reginald is furious with his ignominious situation and he’s determined to get revenge. Rosalind has made some enemies, particularly Russell Fullerton who has had his blackmail schemes upended by the perspicacious young woman. Fullerton intends to ruin Rosalind’s reputation by launching Sir Reginald on the ton. His plans are upended when someone murders Sir Reginald. Fullerton is arrested and jailed. He asks Rosalind to visit him in his cell, proclaims his innocence, and asks her to help. He fears he will not get a fair hearing. But why would Rosiland help?

“You seem to forget, Mr. Fullerton, I also am not well disposed to you personally,” said Rosalind. “You have repeatedly threatened my complete destruction, and that of my sister. You chose to try to use my father against me, and because of your actions, he is dead. Whether you held the knife or not, you are responsible. Why should I concern myself with your troubles?”

“Because, woman, I did not do it! And the one that did is still out there! Is he to be allowed to go free because you want revenge?”

Would Fullerton assist Rosalind were the situation reversed? She agrees to help him, not for the five thousand pounds he offers but for the access she will gain to his secrets after he turns over his keys. Information is the currency that keeps Rosalind afloat.

A Counterfeit Suitor is a complicated story with many connecting strands. Fullerton knows Salter. The formidable society hostess, Countess Lieven, meets with Rosalind and intimates that Mrs. Walford’s dinner to support the widows and orphans of war may not be quite as it appears. It takes all of Rosalind’s friends and family including Alice, her sister Charlotte, and Bow Street Runner Adam Harkness to unravel the mystery of her father’s murder and the high stakes surrounding a seemingly simple question—is Mr. Horatio Salter a worthy suitor for Miss Walford? This is my first Rosalind Thorne mystery—I greatly enjoyed it and now I’m curious: how did a female fixer and amateur detective par excellence emerge from an aristocratic past?