September 29, 2020
The third book in the Dickens of a Crime series finds young Charles Dickens suspecting a miser of pushing his partner out a window, but his fiancée Kate takes a more charitable view of the old man's innocence... 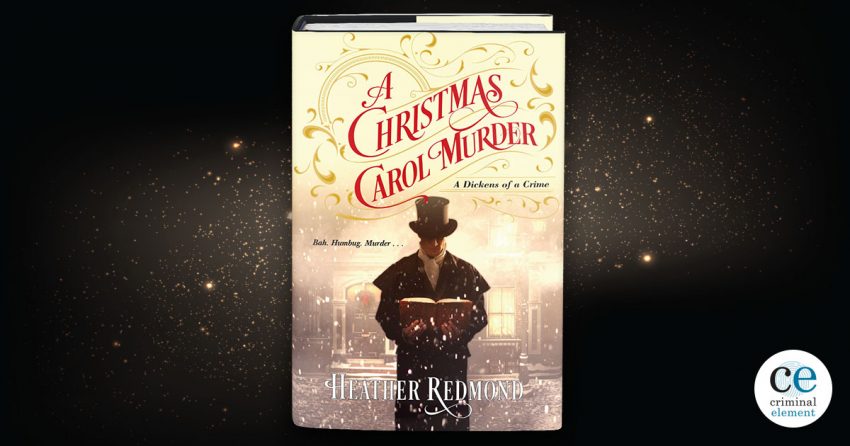 If you enjoy Dickens’s A Christmas Carol, in all its incarnations, you’ll want to read the 3rd in Heather Redmond’s Dickens of a Crime Series. Charles Dickens and his fiancée, Kate Hogarth, go caroling to raise money for a charity that is near to their hearts, Charity for Dressing the Mudlark Children of Blackfriars Bridge. Just in case you are also wondering what a mudlark is, a modern interpretation is a “person who scavenges in river mud for objects of value.” Kate and Charles are accompanied by friends and family. In a booming “bass counterpoint,” Charles’s younger brother Fred Dickens, proclaims, “God and sinners reconciled!” Suddenly, a man came from the window, heading in their direction.

In an instant, he had crashed onto the front steps of the lit-up house, then rolled down them until he landed faceup on the pavement. The moon highlighted the blood puddling under his shattered body, coloring his gray hair.

Horrifyingly, the corpse sports wrought-iron chains around his neck. The carolers try to suss out what might have happened—did he fall? Was it a suicide? Was he assisted in his crash out of the window? What can be gleaned from the chains? Charles says he heard the chains break.

“I heard that, too.” William pointed a gloved finger at the chains. “Good quality. Made for a ship or something like that.”

“He was anchored by them,” Charles suggested. “What a way to die. And in December, which should be merry.”

William ignored his words. “Anchored to something on the house? I agree suicide is a possibility.”

The word chains trigger memories of Marley’s Ghost’s explanation to Scrooge, his former business partner: “I wear the chain I forged in life,” replied the Ghost. “I made it link by link, and yard by yard; I girded it on of my own free will, and of my own free will I wore it. Is its pattern strange to you?”

Kate Hogarth has a flair for detection and she often prompts Charles to reconsider his assumptions.  That said, he is not an unalloyed fan of her inquisitiveness, as when he sees her looking at the corpse.

No, no, he couldn’t have that. Kate had much too much eagerness when it came to murder. While he had no trouble with her puzzling out a mystery, staring at dead men could not be a suitable pastime for a gently reared female.

But Kate insists on remaining by Charles’s side. No answers are forthcoming from the dead man so Charles and Kate knock on the door and ask to speak with the master of the house. His name is Emmanuel Screw and the dead man was his business partner, Jacob Harley. Charles feels a familiarity about the house and Mr. Screw, a rather unpleasant older man. He finally recalls that Emmanuel Screw is the “penurious penny pincher” who refused to give his father a loan years ago.” This memory colors his view of who might be responsible for Harley’s death, however, Kate senses some humanity in Mr. Screw and doubts the old man’s ability to heave a body out of a window.

Ever the journalist, Charles dedicates himself to discovering who’s behind the diabolical defenestration. But before he can investigate further, Harley’s corpse is stolen. Following that, Charles is visited in his quarters by what appears to be Harley’s ghost—or is it merely Charles’s overwrought imagination?

A Christmas Carol Murder plays off Dickens’s classic while subtly diverging from A Christmas Carol as well. All the characters beloved by readers appear, but many of them are presented differently. For instance, Harley is a miserable man: “a squeezing, wrenching, grasping, scraping, clutching, covetous, old sinner!” While Emmanuel Screw is gruff and somewhat Christmas averse, but nonetheless a man who can be redeemed (slightly) without the need of Ghostly Spirits.

Charles Dickens’s life seems very modern, almost like a young man of today (pre-Covid) working the gig economy. A reporter at a paper by day, a writer by night, there aren’t enough hours in the day for Charles Dickens. However, he still finds time to look for Harley’s missing corpse and lend a hand to Mr. Screw for a stretch. He is constantly eating on the fly, making for some delicious passages. Fred Dickens and Charles are roommates, and they occasionally fall out. Charles has a plan for that.

With that cheering thought, he went home by way of a cook shop, picking up Fred’s favorite pork and potato pie, in the hopes of enticing his brother to speak to him again. He even purchased two plump little bundles of plum duff from a street seller near his rooms. Someone must be his friend again, even if it took a bribe.

According to the Great British Puddings website, “plum duff is a variant of the traditional Christmas pudding.” How appropriate for Charles to bring it home to Fred. Victorian London was not a safe milieu, particularly in the less affluent areas—Charles is always on the lookout for thieves and pickpockets. If scoundrels didn’t get you, the horrid London weather might. Consider Charles’s mid-afternoon walk:

He heard church bells pealing three o’clock while he walked through the streets on his way to the newspaper office. It had gone full dark by the time he reached it, dodging figures in the fog. He would not have known if he passed living, breathing people or shades in the brownish muck. Inside, he coughed in hacking Londoner fashion as he tossed his coat over his chair.

Like Dickens’s descriptions of London at Christmastime, Heather Redmond makes you feel London’s gloomy atmosphere inside your bones. It’s no wonder Dickens wanted to write a book full of roaring fires and tables groaning with festive fare, a tale to cheer the public during a bleak time of year.

Readers who are knowledgeable about Dickens’s personal history will enjoy Redmond’s skillful weaving of his life into the plot. As an accompaniment to A Christmas Carol Murder, consider watching The Man Who Invented Christmas, a biographical film that takes A Christmas Carol from an idea to a cherished Christmas story.  There’s some dark intertwined with the glow of Christmas candlelight, subtle indicators that foreshadow potential issues in Charles’s and Kate’s marriage.